Lung transplantation, or pulmonary transplantation is a surgical procedure in which a patient's diseased lungs are partially or totally replaced by lungs which come from a donor. While lung transplants carry certain associated risks, they can also extend life expectancy and enhance the quality of life for end-stage pulmonary patients.

Lung transplantation is the therapeutic measure of last resort for patients with end-stage lung disease who have exhausted all other available treatments without improvement. A variety of conditions may make such surgery necessary. As of 2005, the most common reasons for lung transplantation in the United States were:[1]

Despite the severity of a patient's respiratory condition, certain pre-existing conditions may make a person a poor candidate for lung transplantation:[2]

The history of organ transplants began with several attempts that were unsuccessful due to transplant rejection. Animal experimentation by various pioneers, including Vladimir Demikhov and Dominique Metras, during the 1940s and 1950s, first demonstrated that the procedure was technically feasible. James Hardy of the University of Mississippi performed the first human lung transplant in 1963.[3] Following a single-lung transplantation, the patient survived for 18 days. From 1963-1978, multiple attempts at lung transplantation failed because of rejection and problems with anastomotic bronchial healing. It was only after the invention of the heart-lung machine, coupled with the development of immunosuppressive drugs such as cyclosporine, that organs such as the lungs could be transplanted with a reasonable chance of patient recovery.

The first successful transplant surgery involving the lungs was a heart-lung transplant, performed by Dr. Bruce Reitz of Stanford University on a woman who had idiopathic pulmonary hypertension.[4]

There are certain requirements for potential lung donors, due to the needs of the potential recipient. In the case of living donors, this is also in consideration of how the surgery will affect the donor:[2]

While a transplant center is free to set its own criteria for transplant candidates, certain requirements are generally agreed upon:[2]

Patients who are being considered for placement on the organ transplant list undergo extensive medical tests to evaluate their overall health status and suitability for transplant surgery.[7]

Prior to 2005, donor lungs within the United States were allocated by the United Network for Organ Sharing on a first-come, first-serve basis to patients on the transplant list. This was replaced by the current system, in which prospective lung recipients of age of 12 and older are assigned a lung allocation score or LAS, which takes into account various measures of the patient's health. The new system allocates donated lungs according to the immediacy of need rather than how long a patient has been on the transplant list. Patients who are under the age of 12 are still given priority based on how long they have been on the transplant waitlist. The length of time spent on the list is also the deciding factor when multiple patients have the same lung allocation score.

Patients who are accepted as good potential transplant candidates must carry a pager with them at all times in case a donor organ becomes available. These patients must also be prepared to move to their chosen transplant center at a moment's notice. Such patients may be encouraged to limit their travel within a certain geographical region in order to facilitate rapid transport to a transplant center.

A lobe transplant is a surgery in which part of a living donor's lung is removed and used to replace part of recipient's diseased lung. This procedure usually involves the donation of lobes from two different people, thus replacing a single lung in the recipient. Donors who have been properly screened should be able to maintain a normal quality of life despite the reduction in lung volume.

Many patients can be helped by the transplantation of a single healthy lung. The donated lung typically comes from a donor who has been pronounced brain-dead.

Certain patients may require both lungs to be replaced. This is especially the case for people with cystic fibrosis, due to the bacterial colonisation commonly found within such patients' lungs; if only one lung were transplanted, bacteria in the native lung could potentially infect the newly transplanted organ.

Some respiratory patients may also have severe cardiac disease which would necessitate a heart transplant. These patients can be treated by a surgery in which both lungs and the heart are replaced by organs from a donor or donors.

A particularly involved example of this has been termed a "domino transplant" in the media. First performed in 1987, this type of transplant typically involves the transplantation of a heart and lungs into recipient A, whose own healthy heart is removed and transplanted into recipient B.[8]

While the surgican details will depend on the type of transplant, many steps are common to all these procedures. Prior to operating on the recipient, the transplant surgeon inspects the donor lung(s) for signs of damage or disease. If the lung or lungs are approved, then the recipient is connected to an IV line and various monitoring equipment, including pulse oximetry. The patient will be given general anesthesia, and a machine will breathe for him or her.[9] 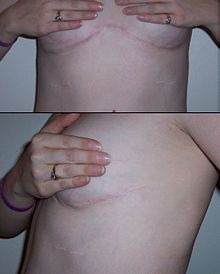 In single-lung transplants, the lung with the worse pulmonary function is chosen for replacement. If both lungs function equally, then the right lung is usually favored for removal because it avoids having to maneuver around the heart, as would be required for excision of the left lung.[2]

In a single-lung transplant the process starts out after the donor lung has been inspected and the decision to accept the donor lung for the patient has been made. An incision is generally made from under the shoulder blade around the chest, ending near the sternum. An alternate method involves an incision under the breastbone.[1] In the case of a singular lung transplant the lung is collapsed, the blood vessels in the lung tied off, and the lung removed at the bronchial tube. The donor lung is placed, the blood vessels reattached, and the lung reinflated. To make sure the lung is satisfactory and to clear any remaining blood and mucus in the new lung a bronchoscopy will be performed. When the surgeons are satisfied with the performance of the lung the chest incision will be closed.

The transplantation process starts after the donor lungs are inspected and the decision to transplant has been made. An incision is then made from under the patient's armpit, around to the sternum, and then back towards the other armpit; this is known as a clamshell incision. In the case of a sequential transplant the recipients lung with the poorest lung functions is collapsed, the blood vessels tied off, and cut at the corresponding bronchi. The new lung is then placed and the blood vessels reattached. To make sure the lung is satisfactory before transplanting the other a bronchoscopy is performed. When the surgeons are satisfied with the performance of the new lung, surgery on the second lung will proceed. In 10% to 20% of double-lung transplants the patient is hooked up to a heart-lung machine which pumps blood for the body and supplies fresh oxygen.[1]

Immediately following the surgery, the patient is placed in an intensive care unit for monitoring, normally for a period of a few days. The patient is put on a ventilator to assist breathing. Nutritional needs are generally met via total parenteral nutrition, although in some cases a nasogastric tube is sufficient for feeding. Chest tubes are put in so that excess fluids may be removed. Because the patient is confined to bed, a urinary catheter is used. IV lines are used in the neck and arm for monitoring and giving medications.[9] After a few days, barring any complications, the patient may be transferred to a general inpatient ward for further recovery. The average hospital stay following a lung transplant is generally one to three weeks, though complications may require a longer period of time.[9] After this stage, patients are typically required to attend rehabilitation gym for approximately 3 months to regain fitness. Light weights, exercise bike, treadmill, stretches and more are all a part of the rehabilitation programme.

There may be a number of side effects following the surgery. Because certain nerve connections to the lungs are cut during the procedure, transplant recipients cannot feel the urge to cough or feel when their new lungs are becoming congested. They must therefore make conscious efforts to take deep breaths and cough in order to clear secretions from the lungs.[10] Their heart rate responds less quickly to exertion due to the cutting of the vagus nerve that would normally help regulate it.[11] They may also notice a change in their voice due to potential damage to the nerves that coordinate the vocal cords.[11]

Post-transplant patients are held from driving for the first 3 months pending an assessment of the patient's capacity to drive; this assessment is usually performed by an occupational therapist. Eyesight, physical ability to do simple actions such as check blind spots, wear a seat belt safely without the wound site being affected and hand eye coordination are all assessed.

Hygiene becomes more important in every day living due to the Immunosuppressant drugs which are required every day to prevent transplant rejection. Lack of a strong immune system leaves transplant recipients vulnerable to infections. Care must be taken into food preparation and hygiene as gastroenteritis becomes more of a risk. 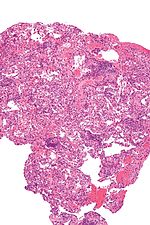 As with any surgical procedure, there are risks of bleeding and infection. The newly transplanted lung itself may fail to properly heal and function. Because a large portion of the patient's body has been exposed to the outside air, sepsis is a possibility, so antibiotics will be given to try to prevent that. Other complications include Post-transplant lymphoproliferative disorder, a form of lymphoma due to the immune suppressants, and gastrointestinal inflammation and ulceration of the stomach and esophagus.

Transplant rejection is a primary concern, both immediately after the surgery and continuing throughout the patient's life. Because the transplanted lung or lungs come from another person, the recipient's immune system will "see" it as an invader and attempt to neutralize it. Transplant rejection is a serious condition and must be treated as soon as possible.

In order to prevent transplant rejection and subsequent damage to the new lung or lungs, patients must take a regimen of immunosuppressive drugs. Patients will normally have to take a combination of these medicines in order to combat the risk of rejection. This is a lifelong commitment, and must be strictly adhered to. The immunosuppressive regimen is begun just before or after surgery. Usually the regimen includes cyclosporine, azathioprine and corticosteroids, but as episodes of rejection may reoccur throughout a patient's life, the exact choices and dosages of immunosuppressants may have to be modified over time. Sometimes tacrolimus is given instead of cyclosporine and mycophenolate mofetil instead of azathioprine.

The immunosuppressants that are needed to prevent organ rejection also introduce some risks. By lowering the body's ability to mount an immune reaction, these medicines also increase the chances of infection. Antibiotics may be prescribed in order to treat or prevent such infections. In turn, infection may increase the risk of rejection, and generally an interaction may prevail between both risks.[12] Certain medications may also have nephrotoxic or other potentially harmful side-effects. Other medications may also be prescribed in order to help alleviate these side effects. There is also the risk that a patient may have an allergic reaction to the medications. Close follow-up care is required in order to balance the benefits of these drugs versus their potential risks.

Chronic rejection, meaning repeated bouts of rejection symptoms beyond the first year after the transplant surgery, occurs in approximately 50% of patients.[13] Such chronic rejection presents itself as bronchiolitis obliterans, or less frequently, atherosclerosis.[13]

These statistics are based on data from 2008. The source data made no distinction between living and deceased donor organs, nor was any distinction made between lobar, single, and double lung transplants.[14]