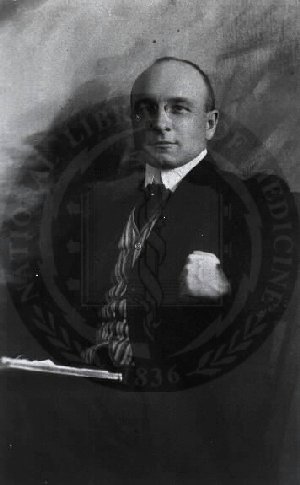 Born in , , Carrel practiced in France and in the United States at the and the Rockefeller Institute for Medical Research. He developed new techniques in vascular sutures and was a pioneer in and . Alexis Carrel was also a member of in the U.S., Spain, Russia, Sweden, the Netherlands, Belgium, France, Vatican City, Germany, Italy and Greece and received honorary doctorates from Queen's University of Belfast, , California, New York, and . He collaborated with American physician in work on vascular suture and the transplantation of blood vessels and organs as well as the head, and Carrel was awarded the 1912 for these efforts. [ [http://nobelprize.org/medicine/laureates/1912/index.html Nobelprize.org] ] Due to his close proximity with 's fascist PPF during the 1930s and his role in implementing eugenics policies during Vichy France, he was accused after the Liberation of collaborationism, but died before the trial.

During the (1914-1918), Carrel and the English chemist developed the Carrel-Dakin method of treating wounds based on chlorine (Dakin's solution) which, preceding the development of , was a major medical advance in the care of traumatic wounds. For this, Carrel was awarded the .

Carrel co-authored a book with famed pilot , "The Culture of Organs", and worked with Lindbergh in the mid-1930s to create the "perfusion pump," which allowed living organs to exist outside of the body during surgery. The advance is said to have been a crucial step in the development of and , and to have laid the groundwork for the , which became a reality decades later. [ [http://www.pbs.org/wnet/redgold/innovators/bio_carrel2.html Red Gold . Innovators & Pioneers . Alexis Carrel | PBS ] ] Some critics of Lindbergh claimed that Carrel overstated Lindbergh's role to gain media attention, [ (Wallace, "American Axis" p. 101)] but other sources say Lindbergh played an important role in developing the device [ [http://mbbnet.umn.edu/doric/lindbergh.html The Doric Column - Lindbergh & Carrel, organ perfusion, tissue culture, transplants, gene therapy ] ] [ [http://www.charleslindbergh.com/heart The "Lone Eagle's" Contribution to Cardiology ] ] . Both Lindbergh and Carrel appeared on the cover of Time magazine on , .

Carrel was also interested in the phenomenon of , or aging. He claimed that all cells continued to grow indefinitely, and this became a dominant view in the early twentieth century.

Carrel's famous experiment was never fully replicated (although other researchers obtained mutated "immortal" strains), and in the 1960s research by and proposed that earlier researchers were wrong, and that differentiated cells can only undergo a limited number of divisions before dying. This is known as the , and is now a pillar of biology.

It is not certain how Carrel obtained his anomalous results. suggests that the daily feeding of nutrient was continually introducing new living cells to the alleged immortal culture. [cite journal | title = Mortality and Immortality at the Cellular Level. A Review | first = L. | last = Hayflick | journal = Biochemistry (Mosc) | year = 1997 | month = Nov | volume = 62 | issue = 11 | pages = 1180&ndash;1190 | url = http://www.ncbi.nlm.nih.gov/sites/entrez?cmd=Retrieve&db=PubMed&list_uids=9467840&dopt=Citation ] J. A. Witkowski has argued that, [cite journal | title = Dr. Carrel's immortal cells | first = JA | last = Witkowski | url = http://www.pubmedcentral.nih.gov/articlerender.fcgi?artid=1082700 | year = 1980 | volume = 24 | issue = 2 | pages = 129&ndash;142 | journal = Medical History | pmid = 6990125 ] while "immortal" strains of visibly mutated cells have been obtained by other experimenters, a more likely explanation is deliberate introduction of new cells into the culture, possibly without Carrel's knowledge. [ Witkowsky explanation is actually based on the account of a visiting medical researcher, Ralph Buchbaum, who reports being told by a technician in Carrel's lab "Dr. Carrel would be so upset if we lost the strain, we just add a few embryo cells now and then". After the first six months, Carrel's colleague Albert Ebeling had actually taken charge of the cultures and published several papers about their development, until they were eventually discarded in 1946. Witkowsky, in "Dr. Carrel's immortal cells", op. cit., quotes Buchbaum's account. At the end Buchbaum writes that "I told this story, of my visit to Carrel's laboratory, to various people. Dr. Bloom ("Buchbaum's director of research in Chicago")refused to believe it. Others chuckled gleefully. Dr. Carrel was to blame only in that he did not keep on top of what was really going on in the laboratory (mostly, he wrote the papers). Dr. Parker and Dr. Ebeling probably suspected something, hence the "retirement". In the interest of truth and science, the incident should have been thoroughly investigated. If it had been, some heads might have rolled, sacrificed to devotion to a wrong hypothesis - immortality of cell strains.". Witkowsky also reports a Dr. Margaret Murray telling him that "one of Carrel's technicians of that time was passionately anti-fascist and detested Carrel's political and social ideas" and expressing her belief that "that this technician would willingly have discredited Carrel scientifically if possible.".]

In 1972, the Swedish Post Office honored Carrel with a stamp that was part of its Nobel stamp series. [ [http://nobelprize.org/nobel/stamps/1972.html The Nobel Stamps of 1972 ] ] In 1979, the Carrel was named after him as a tribute to his scientific breakthroughs.

In February 2002 the Medical University of South Carolina at Charleston, within the celebrations for the Lindbergh 100th birthday established the Lindbergh-Carrel Prize, [ [http://research.musc.edu/lindbergh/prize.htm Charles Lindbergh Symposium ] ] given to major contributors to "development of perfusion and bioreactor technologies for organ preservation and growth". M. E. DeBakey and 9 other scientists [ [http://research.musc.edu/lindbergh/laureates.htm Charles Lindbergh Symposium ] ] received the prize, a bronze statuette espressly created for the event by the Italian artist C. Zoli and named "Elisabeth" [ [http://www.fondazionecarrel.org Foundation Alexis Carrel for thoracic and cardiovascular researches ] ] after Elisabeth Morrow, sister of Lindbergh's wife Anne Morrow, died due to heart disease. Lindbergh in fact was disappointed that contemporary medical technology could not provide an artificial heart pump which would allow for heart surgery on her and that gave the occasion for the first contact between Carrel and Lindbergh.

In 1935, Carrel published a best-selling book titled "L'Homme, cet inconnu" ("Man, The Unknown") which advocated, in part, that mankind could better itself by following the guidance of an elite group of intellectuals, and by implementing a regime of enforced . Sociologist quoted and paraphrased "L'Homme, cet inconnu" in "The Edge of Surrealism": " '(p)resent-day s owe their status to inherited intellectual and physical defects' (sancta simplicitas). And he [Carrel] suggests that this state of affairs should be accentuated through appropriate measures, so as to correlate social and biological inequalities more precisely. Society would then be directed by a hereditary aristocracy composed of descendants from the Crusaders, the heroes of the Revolution, the great criminals, the financial and industrial magnates" (p. 360).

Carrel advocated the use of to rid humanity of "inferior stock", thus endorsing the . His endorsement of this idea began in the mid-1930s, prior to the implementation of such practices in Germany. In the 1936 German introduction of his book, at the publishers request, he added the following praise of the Nazi regime which did not appear in the editions in other languages:

"(t)he German government has taken energetic measures against the propagation of the defective, the mentally diseased, and the criminal. The ideal solution would be the suppression of each of these individuals as soon as he has proven himself to be dangerous." [ Quoted in Reggiani, p. 339]

"(t)he conditioning of petty criminals with the whip, or some more scientific procedure, followed by a short stay in hospital, would probably suffice to insure order. Those who have murdered, robbed while armed with automatic pistol or machine gun, kidnapped children, despoiled the poor of their savings, misled the public in important matters, should be humanely and economically disposed of in small euthanasic institutions supplied with proper gasses. A similar treatment could be advantageously applied to the insane, guilty of criminal acts."." [ quoted on p. 11 of Szasz as A.Carrel, "Man, The Unknown" (Harper and Brothers, NY; (1950))]

In 1937, Carrel joined ’s "Centre d’Etudes des Problèmes Humains" - Coutrot’s aim was to develop what he called an "economic humanism" through "collective thinking." In 1941, through connections to the cabinet (specifically, French industrial physicians and Jacques Ménétrier) he went on to advocate for the creation of the "Fondation Française pour l’Etude des Problèmes Humains" (French Foundation for the Study of Human Problems) which was created by of the collaborationist Vichy regime in 1941, and where he served as 'regent'. [ (see Andrés Horacio Reggiani, "Alexis Carrel, the Unknown: Eugenics and Population Research under Vichy", as well as Caillois, p. 107)] The foundation was at the origin of the , law, enacted by the provisional government, which institutionalized the field of . It worked on (Robert Gessain, Paul Vincent, Jean Bourgeois), on (Jean Sutter), on habitation (Jean Merlet) and on the first s (Jean Stoetzel). "The foundation was chartered as a public institution under the joint supervision of the ministries of finance and public health. It was given financial autonomy and a budget of forty million francs—roughly one franc per inhabitant—a true luxury considering the burdens imposed by the German Occupation on the nation’s resources. By way of comparison, the whole (CNRS) was given a budget of fifty million francs." [ (Reggiani) [http://fhs.dukejournals.org/cgi/reprint/25/2/331] ]

According to Gwen Terrenoire, writing in "Eugenics in France (1913-1941) : a review of research findings", "The foundation was a pluridisciplinary centre that employed around 300 researchers (mainly statisticians, psychologists, physicians) from the summer of 1942 to the end of the autumn of 1944. After the , Carrel was suspended by the Minister of Health; he died in November 1944, but the Foundation itself was "purged", only to reappear in a short time as the (INED) that is still active." [ Gwen Terrenoire, "Eugenics in France (1913-1941) : a review of research findings", Joint Programmatic Commission -ONG Science and Ethics, 2003) [http://ong-comite-liaison.unesco.org/ongpho/acti/3/2/document/8/pdfen.pdf] ] Although Carrel himself died on , , most members of his team did move to the INED, which was led by famous , who coined the expression "". Others joined 's "" (National Hygiene Institute), which later became the .

Some scholars, such as , and have accused Carrel of responsibility for the execution of thousands of mentally ill or impaired patients under Vichy. They argue that this policy was inspired by Carrel's advocacy of eugenics.

Carrel's association with Vichy, and the harshness of his advocacy for eugenics, has led to his descent from fame to obscurity. In recent years, , leader of the far-right Front National party ("National Front"), has become an advocate for Carrel, referring to him as "the first , or, if you will, the first modern ecologist, precisely because he committed himself to defining the relationships of natural harmony.". [ , "L'Espoir" 133-134, cited in Golson, Fascism's Return)] His writings on eugenics are studied "avidly in the training camps of the National Front". [ (Lucien Bonnafé and Patrick Tort, "L'Homme, cet inconnu? Alexis Carrel, Jean-Marie le Pen et les chambres a gaz" ISBN 978-2907993142)]

In the 1990s, the attention the National Front's support brought to Carrel's associations and controversial views created a series of controversies with respect to streets and institutions named in honor of Carrel. Over 20 French cities and towns, including Paris, renamed streets previously named for Carrel. The controversy came to a head in Lyon, the city next to his birthplace, where he studied medicine. One of the four medicine faculties of the university Claude Bernard - Lyon I had been named in his honor in 1968. "" questioned the wisdom of this. In response to this, in May 1995, the Palais des Congrès of Lyon hosted a conference on Carrel and at which several of the participants accused the inquiry commission of the controversial scientist. In early 1996, after five years of embarrassing publicity, the governing board of the University of Lyon decided to rename its school of medicine after , inventor of the ."

In the United States as well as in France, the 1990s were not kind to Carrel's reputation. In an interview for PBS' "", historian blamed Carrel for 's increasing racism in the 1930s. Schlesinger stated in response to a question concerning the source of Lindbergh's beliefs on this subject: "I suppose he got a lot of it from Alexis Carrel, the French biologist who had a kind of racial mysticism of a sort." [ [http://www.pbs.org/wgbh/amex/lindbergh/filmmore/reference/interview/schlesinger03.html PBS, interview with] ]

Alexis Carrel went from being a skeptic of the visions and miracles reported at to being a believer after experiencing a healing he could not explain.