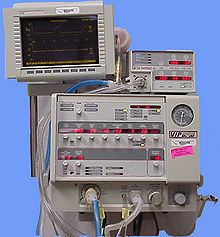 A medical ventilator can be defined as any machine designed to mechanically move breatheable air into and out of the lungs, to provide the mechanism of breathing for a patient who is physically unable to breathe, or breathing insufficiently.

While modern ventilators are generally thought of as computerized machines, patients can be ventilated indefinitely with a bag valve mask, a simple hand-operated machine. After Hurricane Katrina, dedicated staff "bagged" patients in New Orleans hospitals for days with simple bag valve masks.

Ventilators are chiefly used in intensive care medicine, home care, and emergency medicine (as standalone units) and in anesthesia (as a component of an anesthesia machine).

In its simplest form, a modern positive pressure ventilator consists of a compressible air reservoir or turbine, air and oxygen supplies, a set of valves and tubes, and a disposable or reusable "patient circuit". The air reservoir is pneumatically compressed several times a minute to deliver room-air, or in most cases, an air/oxygen mixture to the patient. If a turbine is used, the turbine pushes air through the ventilator, with a flow valve adjusting pressure to meet patient-specific parameters. When overpressure is released, the patient will exhale passively due to the lungs' elasticity, the exhaled air being released usually through a one-way valve within the patient circuit called the patient manifold. The oxygen content of the inspired gas can be set from 21 percent (ambient air) to 100 percent (pure oxygen). Pressure and flow characteristics can be set mechanically or electronically.

Modern ventilators are electronically controlled by a small embedded system to allow exact adaptation of pressure and flow characteristics to an individual patient's needs. Fine-tuned ventilator settings also serve to make ventilation more tolerable and comfortable for the patient. In Germany, Canada, and the United States, respiratory therapists are responsible for tuning these settings while biomedical technologists are responsible for the maintenance.

The patient circuit usually consists of a set of three durable, yet lightweight plastic tubes, separated by function (e.g. inhaled air, patient pressure, exhaled air). Determined by the type of ventilation needed, the patient-end of the circuit may be either noninvasive or invasive.

Noninvasive methods, which are adequate for patients who require a ventilator only while sleeping and resting, mainly employ a nasal mask. Invasive methods require intubation, which for long-term ventilator dependence will normally be a tracheotomy cannula, as this is much more comfortable and practical for long-term care than is larynx or nasal intubation.

Mechanical ventilators are therefore carefully designed so that no single point of failure can endanger the patient. They usually have manual backup mechanisms to enable hand-driven respiration in the absence of power. Some systems are also equipped with compressed-gas tanks and backup batteries to provide ventilation in case of power failure or defective gas supplies, and methods to operate or call for help if their mechanisms or software fail.]]

The early history of mechanical ventilation begins with various versions of what was eventually called the iron lung, a form of noninvasive negative pressure ventilator widely used during the polio epidemics of the 20th century after the introduction of the "Drinker respirator" in 1928, and the subsequent improvements introduced by John Haven Emerson in 1931.[1] Other forms of noninvasive ventilators, also used widely for polio patients, include Biphasic Cuirass Ventilation, the rocking bed, and rather primitive positive pressure machines.[1]

In 1949, John Haven Emerson developed a mechanical assister for anesthesia with the cooperation of the anesthesia department at Harvard University. Mechanical ventilators began to be used increasingly in anesthesia and intensive care during the 1950s. Their development was stimulated both by the need to treat polio patients and the increasing use of muscle relaxants during anesthesia. Relaxant drugs paralyze the patient and improve operating conditions for the surgeon, but also paralyze the respiratory muscles

In the United Kingdom, the East Radcliffe and Beaver models were early examples, the later using an automotive wiper motor to drive the bellows used to inflate the lungs.[2] Electric motors were, however, a problem in the operating theatres of that time, as their use caused an explosion hazard in the presence of flammable anesthetics such as ether and cyclopropane. In 1952, Roger Manley of the Westminster Hospital, London, developed a ventilator which was entirely gas driven, and became the most popular model used in Europe. It was an elegant design, and became a great favourite with European anesthetists for four decades, prior to the introduction of models controlled by electronics. It was independent of electrical power, and caused no explosion hazard. The original Mark I unit was developed to become the Manley Mark II in collaboration with the Blease company, who manufactured many thousands of these units. Its principle of operation was very simple, an incoming gas flow was used to lift a weighted bellows unit, which fell intermittently under gravity, forcing breathing gases into the patient's lungs. The inflation pressure could be varied by sliding the movable weight on top of the bellows. The volume of gas delivered was adjustable using a curved slider, which restricted bellows excursion. Residual pressure after the completion of expiration was also configurable, using a small weighted arm visible to the lower right of the front panel. This was a robust unit and its availability encouraged the introduction of positive pressure ventilation techniques into mainstream European anesthetic practice.

The 1955 release of Forrest Bird's "Bird Universal Medical Respirator" in the United States, changed the way mechanical ventilation was performed with the small green box becoming a familiar piece of medical equipment.[3] The unit was sold as the Bird Mark 7 Respirator and informally called the "Bird". It was a pneumatic device and therefore required no electrical power source to operate.

Intensive care environments around the world revolutionalized in 1971 by the introduction of the first SERVO 900 ventilator (Elema-Schönander). It was a small, silent and effective electronic ventilator, with the famous SERVO feedback system controlling what had been set and regulating delivery. For the first time, the machine could deliver the set volume in volume control ventilation.

Ventilators used under increased pressure (hyperbaric) require special precautions and few ventilators can operate under these conditions.[4] In 1979, Sechrist Industries introduced their Model 500A ventilator which was specifically designed for use with hyperbaric chambers.[5]

Biphasic Cuirass Ventilation (BCV) is a method of ventilation which requires the patient to wear an upper body shell or cuirass, so named after the body armor worn by medieval soldiers. The ventilation is biphasic because the cuirass is attached to a pump which actively controls both the inspiratory and expiratory phases of the respiratory cycle. This method has also been described as 'Negative Pressure Ventilation' (NPV), 'External Chest Wall Oscillation' (ECWO), 'External Chest Wall Compression' (ECWC) and 'External High Frequency Oscillation' (EHFO). BCV may be considered a refinement of the iron lung ventilator. Biphasic Cuirass Ventilation was developed by the late Dr Zamir Hayek, a pioneer in the field of assisted ventilation. Some of Dr Hayek's previous inventions include the Hayek Oscillator, an early form of the technology.