Cuirass
This article is about a type of armour. For details of cavalry wearing cuirasses, see cuirassier. For information about cuirass ventilation, see iron lung. 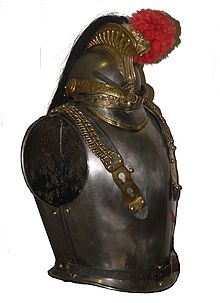 An 1854 cuirass worn by the French Cuirassiers. 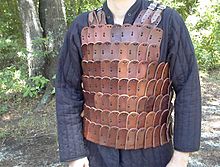 A cuirass (pronounced /kwɨˈræs/; French: cuirasse, Latin: coriaceus) is a piece of armour, formed of a single or multiple pieces of metal or other rigid material, which covers the front of the torso. In a suit of armour this important piece was generally connected to a back piece and cuirass could refer to the complete torso-protecting armour.

The musculature of the male torso was idealized in Hellenistic and Roman times in form of the muscle cuirass[1] or "heroic cuirass" (in French the cuirass esthétique)[2] sometimes further embellished with symbolic representation in relief, familiar in the Augustus of Prima Porta and other heroic representations in official Roman sculpture. As parts of the actual military equipment of classic antiquity, cuirasses and corslets of bronze and iron or some other rigid substance were habitually in use. While some special kind of secondary protection for the breast had been worn in earlier times by men-at-arms in addition to their mail hauberks and their coats armed with splints and studs. It was not until the 14th century that a plate armour became an established part of medieval armour.

The latter portions of the 14th century saw the cuirass gradually come into general use in connection with plate armour for the limbs until, at the close of the century, mail was phased out amongst the nobles (e.g., knights) except in the camail of the bascinet and at the edge of the hauberk. The cuirass was almost universally worn covered throughout its lifespan as a form of armour. Thus, the globose form of the breast-armour of the Black Prince, in his effigy in Canterbury Cathedral, 1376, intimates that a cuirass (as well as a hauberk) is to be considered to have been covered by the royalty-emblazoned jupon of the prince.

The cuirass was always made long enough to rest on the hips. If it had been suspended by the shoulders, its weight would have likely exhausted (and chafed) its wearer. 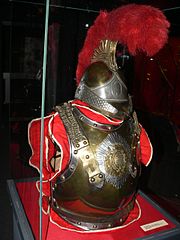 Early in the 15th century, plate armour, including the cuirass, began to be worn without any surcoat; but in the concluding quarter of the century the short surcoat, with full short sleeves, known as the tabard, was in general use over the armour. While the surcoat was being phased out, small plates of various forms and sizes (and not always made in pairs, i.e., the plate for the sword-arm often being smaller and lighter than its the one for the off-hand) were attached to the armour in front of the shoulders, to defend the otherwise vulnerable points where the plate defenses left a gap.

About the middle of the century, the breast-plate of the cuirass was made in two parts; the lower adjusted to overlap the upper, held together with a strap or sliding rivet in order to add flexibility to the advantages plate armour had over mail. In the second half of the 15th century, the cuirass was occasionally superseded by the brigandine jacket, the medieval forerunner of the flak jacket. In essence, the brigandine jacket was constructed of metal plates sewn into a fabric jacket. The fabric was generally a rich material, and was lined throughout with overlapping scales of metal which were attached to the jacket by rivets, having their heads, like studs, visible on the outside. 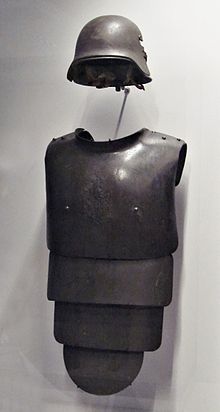 About 1550, the breast-piece of the cuirass was characterized by a vertical central ridge, called the tapul, having near its center a projecting point. Somewhat later, the tapul was moved lower on the breast. Eventually, the profile of the plate began to resemble a pea pod and, as such, was referred to as the peascod cuirass.

Corslets provided with both breast and back pieces were worn by foot-soldiers in the 17th century, while their mounted comrades were equipped in heavier and stronger cuirasses. These defenses continued in use longer than any other single piece of armour. Their use never altogether ceased and in modern armies mounted cuirassiers, armed as in earlier days with breast and back plates, have in some degree emulated the martial splendour of the body armour of the era of medieval chivalry. Both the French and German heavy cavalry wore cuirasses in parade leading up to World War I. In the early part of that conflict, they painted their cuirasses black and wore canvas protection covers over the neo-Roman style helmets.

Some years after the Waterloo, certain historical cuirasses were taken from their repose in the Tower of London and adapted for service by the Life Guards and the Horse Guards. For parade purposes, the Prussian Gardes du Corps and other corps wear cuirasses of richly decorated leather. 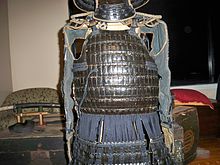 Cuirasses were manufactured in Japan as early as the 4th century.[3]Tankō, worn by foot soldiers and keikō, worn by horsemen were both pre-samurai types of early Japanese cuirass constructed from iron plates connected by leather thongs. During the Heian period (794 to 1185) the Japanese cuirass evolved into the more familiar style worn by the samurai known as the dō or dou. Japanese armourers started to use leather (nerigawa) as a material and lacquer to weather proof the armor parts.

By the end of the Heian period the Japanese cuirass had arrived at the shape recognized as being distinctly samurai. Leather and or iron scales were used to construct samurai armours, with leather, and eventually silk lace (odoshi) used to connect the individual scales (kozane).[4] The introduction of firearms to Japan in 1543 soon led to a new type of cuirass being developed, solid iron plates replaced individual leather and iron scales as bullets replaced arrows and spears. The use of the samurai cuirass lasted until the 1860s when a national army using conventional uniforms was established.[5]Samurai armour (and cuirasses) were last used in 1877 during the satsuma rebellion.[6]