Chivalry is a term related to the medieval institution of knighthood which has an aristocratic military origin of individual training and service to others. Chivalry was also the term used to refer to a group of mounted men-at-arms as well as to martial valour. It is often associated with ideals of knightly virtues, honour and courtly love: "the source of the chivalrous idea," remarked Johan Huizinga, who devoted several chapters of The Waning of the Middle Ages to chivalry and its effects on the medieval character, "is pride aspiring to beauty, and formalized pride gives rise to a conception of honour, which is the pole of noble life."[1] 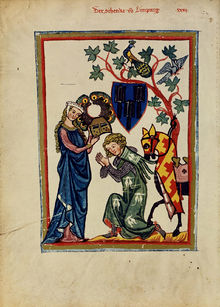 A knight being armed.

In English, the word is first attested in 1292, as a loan from Old French chevalerie "knighthood", an abstract noun formed in the 11th century based on chevalier "knight", ultimately from Medieval Latin caballārius[2] "horseman"; cavalry is from the Italian form of the same word, loaned via Middle French into English around 1540.[3]

Between the 11th century and 15th centuries medieval writers often used the word shivalry, in meanings that changed over time, generally moving from the concrete meaning of "status or fee associated with military follower owning a war horse" towards the moral ideal of the Christian warrior ethos propagated in the Romance genre which became popular by the 12th century, and the ideal of courtly love propagated in the contemporary Minnesang and related genres.

By the 15th century, the term had become mostly detached from its military origins, not least because the rise of infantry in the 14th century had essentially confined knightly horsemanship to the tournament grounds, and essentially expressed a literary ideal of moral and courteous behavior.

"Stitching the Standard" by Edmund Blair Leighton: the lady prepares for a knight to go to war.

Regardless of the diverse written definitions of chivalry, the medieval knightly class was adept at the art of war, trained in fighting in armor, with horses, lances, swords and shields. Knights were taught to excel in the arms, to show courage, to be gallant, loyal and to swear off cowardice and baseness.[4]

Related to chivalry was the practice of heraldry and its elaborate rules of displaying coats of arms. When not fighting, chivalric knights typically resided in a castle or fortified house, while some knights lived in the courts of kings, dukes and other great lords. The skills of the knight carried over to peacetime activities such as the hunt and tournament.

Christianity had a modifying influence on the classical concept of heroism and virtue, nowadays identified with the virtues of chivalry.[5] The Peace and Truce of God in the 10th century was one such example, with limits placed on knights to protect and honor the weaker members of society and also help the church maintain peace. At the same time the church became more tolerant of war in the defense of faith, espousing theories of the just war; and liturgies were introduced which blessed a knight's sword, and a bath of chivalric purification.The first noted support for chivalric vocation, or the establishment of knightly class to ensure the sanctity and legitimacy of Christianity was written in 930 by Odo, abbot of Cluny in the Vita of St. Gerald of Aurillac, which argued that the sanctity of Christ and Christian doctrine can be demonstrated through the legitimate unsheathing of the “sword against the enemy.” [6] In the 11th century the concept of a "knight of Christ" (miles Christi) gained currency in France, Spain and Italy.[4] These concepts of "religious chivalry" were further elaborated in the era of the Crusades, with the Crusades themselves often being seen as a chivalrous enterprise.[4] Their ideas of chivalry were also further influenced by Saladin, who was viewed as a chivalrous knight by medieval Christian writers.

From the 12th century onward chivalry came to be understood as a moral, religious and social code of knightly conduct. The particulars of the code varied, but codes would emphasize the virtues of courage, honor, and service. Chivalry also came to refer to an idealization of the life and manners of the knight at home in his castle and with his court.

Medieval courtly literature glorifies the valor, tactics and ideals of ancient Romans.[4] For example the ancient hand-book of warfare written by Vegetius called De Re Militari was translated into French in the 13th century as L'art de chevalerie by Jean de Meun. Later writers also drew from Vegetius such as Honore Bonet who wrote the 14th century L'arbes des batailles, which discussed the morals and laws of war. In the 15th century Christine de Pizan combined themes from Vegetius, Bonet and Frontinus in Livre des faits d'armes et de chevalerie.

In the later Middle Ages, wealthy merchants strove to adopt chivalric attitudes - the sons of the bourgeoisie were educated at aristocratic courts where they were trained in the manners of the knightly class.[4] This was a democratization of chivalry, leading to a new genre called the courtesy book, which were guides to the behavior of "gentlemen". Thus, the post-medieval gentlemanly code of the value of a man's honor, respect for women, and a concern for those less fortunate, is directly derived from earlier ideals of chivalry and historical forces which created it.[4]

The medieval development of chivalry, with the concept of the honor of a lady and the ensuing knightly devotion to it, not only derived from the thinking about the Virgin Mary, but also contributed to it.[7] The medieval veneration of the Virgin Mary was contrasted by the fact that ordinary women, especially those outside aristocratic circles, were looked down upon. Although women were at times viewed as the source of evil, it was Mary who as mediator to God was a source of refuge for man. The development of medieval Mariology and the changing attitudes towards women paralleled each other and can best be understood in a common context.[8]

When examining medieval literature, chivalry can be classified into three basic but overlapping areas:

These three areas obviously overlap quite frequently in chivalry, and are often indistinguishable.

Chivalry underwent a revival and elaboration of chivalric ceremonial and rules of etiquette in the fourteenth century that was examined by Johan Huizinga, in The Waning of the Middle Ages (1919, 1924), in which he dedicates a full chapter to "The idea of chivalry". In contrasting the literary standards of chivalry with the actual warfare of the age, the historian finds the imitation of an ideal past illusory; in an aristocratic culture such as Burgundy and France at the close of the Middle Ages, "to be representative of true culture means to produce by conduct, by customs, by manners, by costume, by deportment, the illusion of a heroic being, full of dignity and honour, of wisdom, and, at all events, of courtesy. ...The dream of past perfection ennobles life and its forms, fills them with beauty and fashions them anew as forms of art".[9]

There are a number of questions historians debate related to chivalry. In his monumental study of Chivalry, The Broad-Stone of Honour, Kenelm Henry Digby offered the following definition: 'Chivalry is only a name for that general spirit or state of mind which disposes men to heroic actions, and keeps them conversant with all that is beautiful and sublime in the intellectual and moral world.' It is still debated as to what extent the exploits of notable knights and historical figures such as Saladin, Godfrey of Bouillon, William Marshal and Bertrand du Guesclin set new standards of knightly behavior, or were instead reflections of existing models of conduct.[4] Another common debate is whether, since knights bore arms, the ranks of knights were open to anyone who had the physical requirements and skills, or restricted to only those who were born into knightly families.[4]