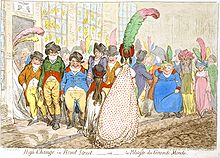 In High-Change in Bond Street,—ou—la Politesse du Grande Monde (1796), James Gillray caricatured the lack of etiquette in a group of men leering at women and crowding them off a pavement.

/ˈɛtɨkɛt/ or /ˈɛtɨkɪt/, French: [e.ti.kɛt]) is a code of behavior that delineates expectations for social behavior according to contemporary conventional norms within a society, social class, or group. The French word étiquette, literally signifying a tag or label first appeared in English around 1750.[1]

Like culture, etiquette is a word that has gradually grown to become plural, especially in a multi-ethnic society with many clashing expectations. Thus, it is now possible to refer to "an etiquette" or "a culture", realizing that these may not be universal. In Britain, the word "etiquette" has been described as the one word that aptly describes life during the reign of Queen Victoria.[2]

Manners involve a wide range of social interactions within cultural norms as in the "comedy of manners", or a painter's characteristic "manner". Etiquette and manners, like mythology, have buried histories especially when they seem to have little obvious purpose, and their justifications as logical ("respect shown to others" etc.) may be equally revealing to the social historian.

The etiquette of business is the set of written and unwritten rules of conduct that make social interactions run more smoothly. Office etiquette in particular applies to coworker interaction, excluding interactions with external contacts such as customers and suppliers. When conducting group meetings in the United States, the assembly might follow Robert's Rules of Order, if there are no other company policies to control a meeting.

Both office and business etiquette overlap considerably with basic tenets of netiquette, the social conventions for using computer networks. It is the social Behaviour.. These rules are often echoed throughout an industry or economy. For instance, 49% of employers surveyed in 2005 by the American National Association of Colleges and Employers found that non-traditional attire would be a "strong influence" on their opinion of a potential job candidate.[3]

Adjusting to foreign etiquettes is a major complement of culture shock, providing a market for manuals.[4]

The Japanese are very formal. Moments of silence are far from awkward. Smiling doesn’t always mean that the individual is expressing pleasure. Business cards are to be handed out formally following this procedure: Hand card with writing facing upwards; bow when giving and receiving the card; grasp it with both hands; read it carefully; and put it in a prominent place. The Japanese feel a “Giri” an obligation to reciprocate a gesture of kindness. They also rely on an innate sense of right and wrong.

Some DO's and DONT’s: • DO NOT mix sake with any other alcohol. • DO NOT stash away a business card in a pocket or in a place where it is likely to be misplaced or damaged. • DO look at the business card when given, and try to say something genuinely nice about it (colors, font, raised lettering, etc.)

Kenyans believe that their tribal identity is very important. Kenyans are also very nationalistic. It is rare that you will find a Kenyan that prefers to be alone, most of the time they are very friendly and welcoming of guests. Kenyans are very family oriented. 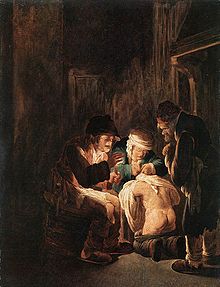 Etiquette is dependent on culture; what is excellent etiquette in one society may shock another. Etiquette evolves within culture. The Dutch painter Andries Both shows that the hunt for head lice (illustration, right), which had been a civilized grooming occupation in the early Middle Ages, a bonding experience that reinforced the comparative rank of two people, one groomed, one groomer, had become a peasant occupation by 1630. The painter portrays the familiar operation matter-of-factly, without the disdain this subject would have received in a 19th-century representation.

Etiquette can vary widely between different cultures and nations. For example, in Hausa culture, eating while standing may be seen as offensively casual and ill-omened behavior, insulting the host and showing a lack of respect for the scarcity of food -- the offense is known as "eating with the devil" or "committing santi." In China, a person who takes the last item of food from a common plate or bowl without first offering it to others at the table may be seen as a glutton who is insulting the host's generosity. Traditionally, if guests do not have leftover food in front of them at the end of a meal, it is to the dishonour of the host. In America a guest is expected to eat all of the food given to them, as a compliment to the quality of the cooking. However, it is still considered polite to offer food from a common plate or bowl to others at the table.

In such rigid hierarchal cultures as Korea and Japan, alcohol helps to break down the strict social barrier between classes. It allows for a hint of informality to creep in. It is traditional for host and guest to take turns filling each other's cups and encouraging each other to gulp it down. For someone who does not consume alcohol (except for religious reasons), it can be difficult escaping the ritual of the social drink.[5]

Etiquette is a topic that has occupied writers and thinkers in all sophisticated societies for millennia, beginning with a behavior code by Ptahhotep, a vizier in ancient Egypt's Old Kingdom during the reign of the Fifth Dynasty king Djedkare Isesi (ca. 2414–2375 BC). All known literate civilizations, including ancient Greece and Rome, developed rules for proper social conduct. Confucius included rules for eating and speaking along with his more philosophical sayings.

Early modern conceptions of what behavior identifies a "gentleman" were codified in the 16th century, in a book by Baldassare Castiglione, Il Cortegiano ("The Courtier"); its codification of expectations at the Este court remained in force in its essentials until World War I. Louis XIV established an elaborate and rigid court ceremony, but distinguished himself from the high bourgeoisie by continuing to eat, stylishly and fastidiously, with his fingers. An important book about etiquette is Galateo, overo de' costumi by Monsignor Giovanni della Casa; in fact, in Italian, etiquette is generally called galateo (or etichetta or protocollo).

As noted above, across the world, Debrett's is considered by many to be the arbiter of etiquette; its guides to manners and form have long been and continue to be the last word among polite society[citation needed]

In the American colonies Benjamin Franklin and George Washington wrote codes of conduct for young gentlemen. The immense popularity of advice columns and books by Letitia Baldrige and Miss Manners shows the currency of this topic. Even more recently, the rise of the Internet has necessitated the adaptation of existing rules of conduct to create Netiquette, which governs the drafting of e-mail, rules for participating in an online forum, and so on.

In Germany, many books dealing with etiquette, especially dining, dressing etc., are called the Knigge, named after Adolph Freiherr Knigge who wrote the book Über den Umgang mit Menschen (On Human Relations) in the late 18th century. However, this book is about good manner and also about the social states of its time, but not about etiquette.

Etiquette may be wielded as a social weapon. The outward adoption of the superficial mannerisms of an in-group, in the interests of social advancement rather than a concern for others, is considered by many a form of snobbery, lacking in virtue.

Нужно сделать НИР?
Synonyms:
Prescribed form (of behavior, as that set down on a card or ticket on the occasion of ceremonies at court), fashionable ceremony, ceremonial code, forms of good-breeding, conventional decorum