A bag valve mask (also known as a BVM or Ambu bag) is a hand-held device used to provide to a patient who is not breathing or who is breathing inadequately. The device is a normal part of a kit for trained professional, such as crew. The BVM is frequently used in s, and is an essential part of a . The device is used extensively in the operating room to ventilate an anaesthetised patient in the minutes before a mechanical ventilator is attached. The device is self-filling with , although additional (O2) can be added.

Use of the BVM to ventilate a patient is frequently called "bagging" the patient. 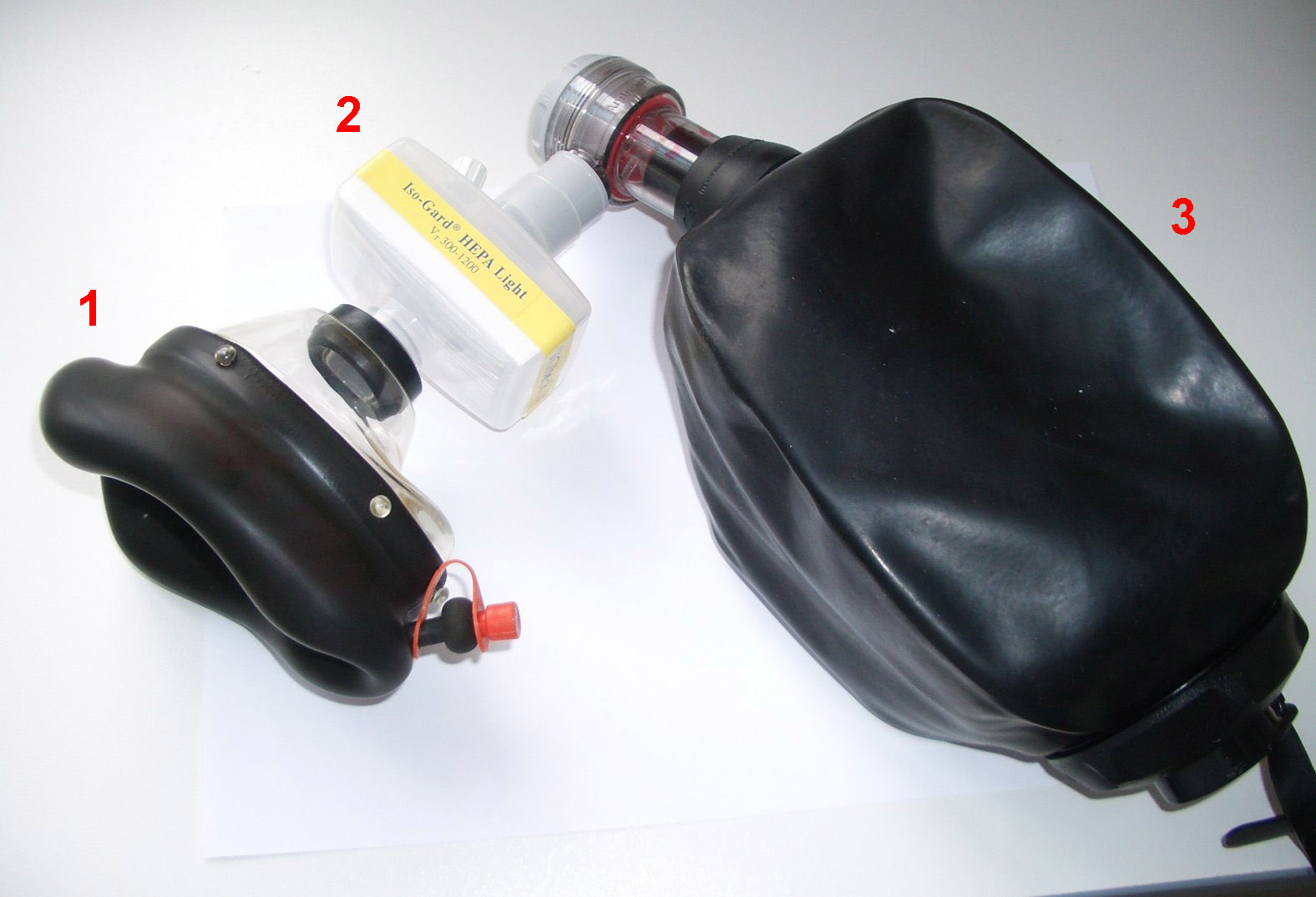 right|thumb|The Ambu Resuscitator bag or BVM, this version shows is a hybrid MkIII body, Mark IV head and with an old obsolete latex inflatable seal on the mask. The part labelled 1 is a flexible mask designed to seal to the patient's face, and the part labelled 3 is a self-filling bag, i.e. re-fills as an action of the elastic re-coil of the bag after compression.

The BVM consists of a flexible air chamber, about the size of a rugby ball, attached to a face mask via a shutter valve. When the air chamber or "bag" is squeezed, the device forces air through into the patient's lungs; when the bag is released, it self-inflates, drawing in ambient air or a low pressure oxygen flow supplied from a regulated cylinder, whilst the patient's lungs deflate to the air through the one way valve.

Bag and valve combinations can also be attached to an alternate airway adjunct, such as an endo-tracheal tube or , instead of the mask with which it is supplied. Often a small HME filter is also used (Heat & Moisture exchanger or simple put - a Humidifying / bacterial filter - see diagram on the right)

A bag valve mask can be used without being attached to an oxygen tank to provide air to the patient, but supplemental oxygen is recommended since it increases the partial pressure of oxygen in the air, helping to increase perfusion in the patient.

Most devices also have a reservoir which can fill with oxygen while the patient is exhaling (a process which happens passively), in order to increase the amount of oxygen that can be delivered to the patient to nearly 100%. [cite book|last=Stoy|first=Walt|title=Mosby's EMT-Basic Textbook|publisher=Mosby/JEMS|date=2004|ISBN=0323034381|url=http://www3.us.elsevierhealth.com/promo/Stoy/pdfs/ch8.pdf]

Most types of the device are now disposable and therefore single use, while others are designed to be cleaned and reused. Many users have moved away from the reusable bags to reduce the possibility of cross-contamination.

The BVM directs the gas inside it via a one-way when compressed by a rescuer; the gas is then delivered through a mask and into the patient's , bronchus and into the s. In order to be effective, a bag valve mask must deliver between 500 and 800 s of air to the patient's lungs, but if oxygen is provided through the tubing and if the patient's chest rises with each inhalation (indicating that adequate amounts of air are reaching the lungs), 400 to 600 ml may still be adequate. Squeezing the bag once every 5 seconds for an adult or once every 3 seconds for an infant or child provides an adequate (12 respirations per minute in an adult and 20 per minute in a child or infant). ["Emergency Care", Pages 142-3]

Professional rescuers are taught to ensure that the mask portion of the BVM is properly sealed around the patient's face (that is, to ensure proper "mask seal"); otherwise, air escapes from the mask and is not pushed into the lungs. In order to maintain this protocol, some protocols use a method of ventilation involving two rescuers: one rescuer to hold the mask to the patient's face with both hands and ensure a mask seal, while the other squeezes the bag. ["Emergency Care", Page 141.] However, as most s have only two members of crew, the other crew member is likely to be doing compressions in the case of CPR, or may be performing other skills such as . In this case, or if no other options are available, the BVM can also be operated by a single rescuer who holds the mask to the patient's face with one hand, in the s grip, and squeezes the bag with the other.

When using a BVM, as with other methods of insufflation, there is a risk of over-inflating the lungs. This can lead to pressure damage to the lungs themselves, and can also cause air to enter the stomach, causing which can make it more difficult to inflate the lungs and which can cause the patient to vomit. This can be avoided by care on behalf of the rescuer. Alternatively, some models of BVM (usually Paediatric) are fitted with a valve which prevents over inflation, by venting the pressure when a pre-set pressure is reached.

An (ETT) can be inserted by a trained practitioner and can substitute for the mask portion of the BVM. This provides a more secure fit and is easier to manage during emergency transport, since the ET tube is sealed with an inflatable cuff in the trachea, so that any regurgitation cannot enter the s. Such material can severely damage the lung tissue, and in the absence of an ET tube, could choke the patient by obstructing the airway. Inhalation of stomach contents can be fatal; the after effects can cause or .

Some rescuers may also choose to use a different form of resuscitation adjunt, such as an or , which would be inserted and then used with the BVM.

In a hospital, long-term mechanical ventilation is provided by using more complex devices such as an intensive care ventilator, rather than by a BVM, which requires at least one person to operate it constantly.

One proprietary brand of a self-inflating BVM resuscitator is called the Ambu bag. The concept for the original Ambu bag was developed in 1953 by the German engineer, Dr. Holger Hesse, and his partner, Danish anaesthetist, Henning Ruben. In 1956, the world's first non-electric, self-inflating resuscitator was ready for production by their company, Ambu A/S, which still produces a wide range of single-patient and multi-use resuscitators.