A newborn infant sleeping in an incubator

The problem of premature and congenitally ill infants is not a new one, by any means. For centuries, people have attempted to save infants that had previously died from lack of care. There are scholarly papers published as early as the 17th and 18th century that attempt to share knowledge of interventions and what qualifies a child as viable.[1][2][3] It was not until 1922, however, that hospitals started grouping the newborn infants into one area, now called the Neonatal Intensive Care Unit (NICU).[4]

A NICU is typically directed by one or more neonatologists and staffed by nurses, nurse practitioners, pharmacists, physician assistants, resident physicians, and respiratory therapists. Many other ancillary disciplines and specialists are available at larger units.

Before the industrial revolution, premature and ill infants were born and cared for at home and either lived or died without medical intervention.[5] In the mid-nineteenth century, the infant incubator was first developed, based on the incubators used for chicken eggs.[6] Dr. Stephane Tarnier is generally considered to be the father of the incubator (or isolette as it is now known), having developed it to attempt to keep premature infants in a Paris maternity ward warm.[5] Other methods had been used before, but this was the first closed model, additionally, he helped convince other physicians that the treatment helped premature infants. France became a forerunner in assisting premature infants, in part due to their concerns about a falling birth rate.[5]

Dr. Pierre Budin, followed in Tarnier’s footsteps after he retired, noting the limitations of infants in incubators and the importance of breastmilk and the mother’s attachment to the child.[7] Budin is known as the father of modern perinatology, and his seminal work The Nursling (Le Nourisson in French) became the first major publication to deal with the care of the neonate.[8]

Another factor that contributed to the development of modern neonatology was thanks to Dr. Martin Couney and his permanent installment of premature babies in incubators at Coney Island. A more controversial figure, he studied under Dr. Budin and brought attention to premature babies and their plight through his display of infants as sideshow attractions at Coney Island and the World’s Fair in New York and Chicago in 1933 and 1939, respectively.[6]

Doctors took an increasing role in childbirth from the eighteenth century onwards. However, the care of newborn babies, sick or well, remained largely in the hands of mothers and midwives. Some baby incubators, similar to those used for hatching chicks, were devised in the late nineteenth century. In the United States these were shown at commercial exhibitions, complete with babies inside, until 1931. Dr A. Robert Bauer MD at Henry Ford Hospital in Detroit, MI successfully combined oxygen, heat, humidity, ease of accessibility, and ease of nursing care in 1931.[9] It was not until after the Second World War that special care baby units (SCBUs) were established in many hospitals. In Britain, early SCBUs opened in Birmingham and Bristol. At Southmead Hospital, Bristol, initial opposition from obstetricians lessened after quadruplets born there in 1948 were successfully cared for in the new unit. More resources became available: the first unit had been set up with £100. Most early units had little equipment and relied on careful nursing and observation.

Incubators were expensive so the whole room often was kept warm instead. Cross-infection between babies was greatly feared. Strict nursing routines involved staff wearing gowns and masks, constant hand washing and minimal handling of babies. Parents were sometimes allowed to watch through the windows of the unit. Much was learned about feeding—frequent, tiny feeds seemed best—and breathing. Oxygen was given freely until the end of the 1950s, when it was shown that the high concentrations reached inside incubators caused some babies to go blind. Monitoring conditions in the incubator, and the baby itself, was to become a major area of research. Although incubators provided oxygen and warmth, science in the 1950s was limited and it was not until later that technology played a larger role in the decline of infant mortality. The development of surfactant is the most important development in neonatology to date, allowing the oxygenation and ventilation of underdeveloped lungs. 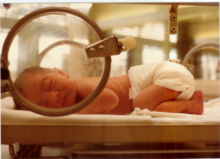 By the 1970s NICUs were an established part of hospitals in the developed world. In Britain, some early units ran community programmes, sending experienced nurses to help care for premature babies at home. But increasingly technological monitoring and therapy meant special care for babies became hospital-based. By the 1980s, over 90% of births took place in hospital anyway. The emergency dash from home to the NICU with baby in a transport incubator had become a thing of the past, though transport incubators were still needed. Specialist equipment and expertise were not available at every hospital, and strong arguments were made for large, centralised NICUs. On the downside was the long travelling time for frail babies and for parents. A 1979 study showed that 20% of babies in NICUs for up to a week were never visited by either parent. Centralised or not, by the 1980s few questioned the role of NICUs in saving babies. Around 80% of babies born weighing less than 1.5 kg now survived, compared to around 40% in the 1960s. From 1982 in Britain pediatricians could train and qualify in the sub-specialty of neonatal medicine. 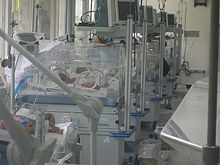 Not only careful nursing, but also new techniques and instruments now played a major role. As in adult intensive care units, the use of monitoring and life support systems became routine. These needed special modification for small babies, whose bodies were tiny and often immature. Adult ventilators, for example, could damage babies lungs and gentler techniques with smaller pressure changes were devised. The many tubes and sensors used for monitoring the baby's condition, blood sampling and artificial feeding made some babies scarcely visible beneath the technology. Furthermore, by 1975, over 18% of newborn babies in Britain were being admitted to NICUs. Some hospitals admitted all babies delivered by Caesarian section, or under 2500g in weight. The fact that these babies missed early close contact with their mothers was a growing concern. As in other area of medicine, the 1980s saw questions being raised about the human, and the economic costs of too much technology. Admission policies gradually changed. In addition, treating low birth weight infants is expensive, especially when there are much cheaper ways of ensuring healthy babies. The key is prevention. Money can be spent on programs educating mothers on staying healthy during their pregnancy. One program (one that encourages women to stop smoking) is one third the price of neonatal intensive care and has been proven to work. During this program, a significant number of women often quit.

NICUs now concentrate on treating very small, premature, or congenitally ill babies. Some of these babies are from higher-order multiple births, but most are still single babies born too early. Premature labour, and how to prevent it, remains a perplexing problem for doctors. Even though medical advancements allow doctors to save low birth weight babies, it is almost invariably better to delay such births.

Over the last 10 years or so, SCBUs have become much more 'parent friendly', encouraging maximum involvement with the babies. Routine gowns and masks have gone and parents are encouraged to help with care as much as possible. Cuddling, and skin-to-skin contact, also known as Kangaroo care, are seen as beneficial for all but the frailest (very tiny babies are exhausted by the stimulus of being handled, or larger critically ill infants). Less stressful ways of delivering high-technology medicine to tiny patients have been devised: sensors to measure blood oxygen levels through the skin, for example, and ways of reducing the amount of blood taken for tests.

Some major problems of the NICU have almost disappeared. Exchange transfusions, in which all the blood is removed and replaced, are rare now. Rhesus incompatibility (a difference in blood groups) between mother and baby is largely preventable, and was the most common cause for exchange transfusion in the past. Breathing difficulties, intraventricular hemorrhage, necrotizing enterocolitis and infection still claim many infant lives and are the focus of many current research projects.

The long term outlook for premature babies saved by NICUs has always been a concern. From the early years, it was reported that a higher proportion than normal grew up with disabilities, including cerebral palsy and learning difficulties. Now that treatments are available for many of the problems faced by tiny or immature babies in the first weeks of life, long-term follow-up, and minimising long-term disability, are major research areas.

Besides prematurity and extreme low birth weight, common diseases cared for in a NICU include perinatal asphyxia, major birth defects, sepsis, neonatal jaundice, and respiratory distress syndrome due to immaturity of the lungs. The leading cause of death in NICUs is generally necrotizing enterocolitis. Complications of extreme prematurity may include intracranial hemorrhage, chronic bronchopulmonary dysplasia (see Infant respiratory distress syndrome), or retinopathy of prematurity. An infant may spend a day of observation in a NICU or may spend many months there. Overall survival rates, for all gestational ages lumped together, are roughly 70%.

Neonatology and NICUs have greatly increased the survival of very low birth weight and extremely premature infants. In the era before NICUs, infants of birth weight less than 1400 grams (3 lb, usually about 30 weeks gestation) rarely survived. Today, infants of 500 grams at 26 weeks have a fair chance of survival.

The NICU environment provides challenges as well as benefits. Stressors for the infants can include continual light, a high level of noise, separation from their mothers, reduced physical contact, painful procedures, and interference with the opportunity to breastfeed. A NICU can be stressful for the staff as well. A special aspect of NICU stress for both parents and staff is that infants may survive, but with damage to the brain or eyes.[citation needed]

NICU rotations are essential aspects of pediatric and obstetric residency programs, but NICU experience is encouraged by other specialty residencies, such as family practice, surgery, Pharmacy, and emergency medicine. 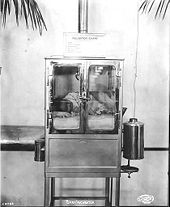 An incubator (or isolette[10]) is an apparatus used to maintain environmental conditions suitable for a neonate (newborn baby). It is used in preterm births or for some ill full-term babies.

Possible functions of a neonatal incubator are:

A transport incubator is an incubator and the most necessary neonatal instruments in a transportable format, and is used when a sick or premature baby is moved, e.g., from one hospital to another, as from a community hospital to a larger medical facility with a proper neonatal intensive care unit. It usually has a miniature ventilator, cardio-respiratory monitor, IV pump, pulse oximeter, and oxygen supply built into its frame.[12]

Common diagnosis and pathologies in the NICU include:

The concept of designations for hospital facilities that care for newborn infants according to the level of complexity of care provided was first proposed in the United States in 1976.[14] Levels in the United States are designated by the guidelines published by the American Academy of Pediatrics[15] In Britain the guidelines are issued by The British Association of Perinatal Medicine (BAPM), and in Canada they are maintained by The Canadian Paediatric Society.

In a special care baby unit a nurse can be assigned up to 4 babies to care for.

In the second level of care, a nurse is assigned up to two babies.

Typically in the third level of care a nurse is assigned one baby only and in some cases may be 2 nurses to 1 baby.[16]