Esophageal atresia (or Oesophageal atresia) is a congenital medical condition (birth defect) which affects the alimentary tract. It causes the esophagus to end in a blind-ended pouch rather than connecting normally to the stomach. It comprises a variety of congenital anatomic defects that are caused by an abnormal embryological development of the esophagus. Anatomically characterized by a congenital obstruction of the light of the esophagus with interrupted the continuity of the esophageal wall.[clarification needed] The esophagus is divided into two blind pouches, an upper and lower, which may or may not communicate with the tracheobronchial tree through fistulous tracts called Tracheoesophageal Fistula (TEF).

It occurs in approximately 1 in 4425 live births.

Congenital esophageal atresia (EA) represents a failure of the esophagus to develop as a continuous passage. Instead, it ends as a blind pouch. Tracheoesophageal fistula (TEF) represents an abnormal opening between the trachea and esophagus. EA and TEF can occur separately or together. EA and TEF are diagnosed in the ICU at birth and treated immediately.

The presence of EA is suspected in an infant with excessive salivation (drooling) and in a newborn with drooling that is frequently accompanied by choking, coughing and sneezing. When fed, these infants swallow normally but begin to cough and struggle as the fluid returns through the nose and mouth. The infant may become cyanotic (turn bluish due to lack of oxygen) and may stop breathing as the overflow of fluid from the blind pouch is aspirated (sucked into) the trachea. The cyanosis is a result of laryngospasm (a protective mechanism that the body has to prevent aspiration into the trachea). Over time respiratory distress will develop.

If any of the above signs/symptoms are noticed, a catheter is gently passed into the esophagus to check for resistance. If resistance is noted, other studies will be done to confirm the diagnosis. A catheter can be inserted and will show up as white on a regular x-ray film to demonstrate the blind pouch ending. Sometimes a small amount of barium (chalk-like liquid) is placed through the mouth to diagnose the problems.

Treatment of EA and TEF is surgery to repair the defect. If EA or TEF is suspected, all oral feedings are stopped and intravenous fluids are started. The infant will be positioned to help drain secretions and decrease the likelihood of aspiration. Babies with EA may sometimes have other problems. Studies will be done to look at the heart and spine. Sometimes studies are done to look at the kidneys.

Surgery to fix EA is rarely an emergency. Once the baby is in condition for surgery, an incision is made on the side of the chest. The esophagus can usually be sewn together. Following surgery, the baby may be hospitalized for a variable length of time. Care for each infant is individualized.

Its very commonly seen in a newborn with imperforate anus.

This condition takes several different forms, often involving one or more fistulas connecting the trachea to the esophagus (tracheoesophageal fistula). Approximately 85% of affected babies will have a 'lower fistula'. 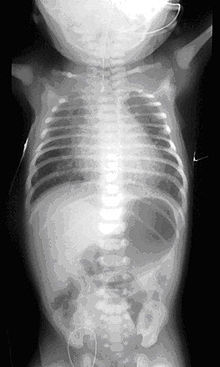 Plain X-ray of the chest and abdomen showing a feeding tube unable to move beyond an upper esophageal pouch. 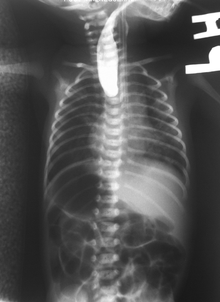 Plain x-ray with contrast in the upper esophagus above the atresia. 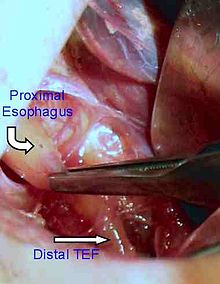 Surgical treatment of the condition. 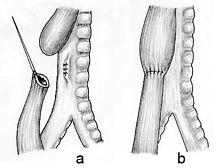 This birth defect arises in the fourth fetal week, when the trachea and esophagus should begin to separate from each other.

It can be associated with disorders of the tracheoesophageal septum.[1]

Other birth defects may co-exist, particularly in the heart, but sometimes also in the anus, spinal column, or kidneys. This is known as VACTERL syndrome because of the involvement of Vertebral column, Anorectal, Cardiac, Tracheal, Esophageal, Renal, and Limbs. It is associated with polyhydramnios in the third trimester.

This condition is visible, after about 26 weeks, on an ultrasound. On antenatal USG, the finding of an absent or small stomach in the setting of polyhydramnios used to be considered suspicious of esophageal atresia. However, these findings have a low positive predictive value. The upper neck pouch sign is another sign that helps in the antenatal diagnosis of esophageal atresia and it may be detected soon after birth as the affected infant will be unable to swallow its own saliva. Also, the newborn can present with gastric distention, cough, apnea, tachypnea, and cyanosis. In many types of esophageal atresia, a feeding tube will not pass through the esophagus.

Any attempt at feeding could cause aspiration pneumonia as the milk collects in the blind pouch and overflows into the trachea and lungs. Furthermore, a fistula between the lower esophagus and trachea may allow stomach acid to flow into the lungs and cause damage. Because of these dangers, the condition must be treated as soon as possible after birth.

Treatments for the condition vary depending on its severity. The most immediate and effective treatment in the majority of cases is a surgical repair to close the fistula/s and reconnect the two ends of the esophagus to each other. This is not possible in all cases, since the gap between upper and lower esophageal segments may be too long to bridge. In many of these so-called long gap cases, though, an advanced surgical treatment developed by John Foker, MD [1], may be utilized to elongate and then join together the short esophageal segments. Using the Foker technique, surgeons place traction sutures in the tiny esophageal ends and increase the tension on these sutures daily until the ends are close enough to be sewn together. The result is a normally functioning esophagus, virtually indistinguishable from one congenitally well formed.

Traditional surgical approaches include gastrostomy, gastric pull-up, colonic transposition and jejunum transposition, although these carry some disadvantages [2]. Gastrostomy, or G-tube, allows for tube feedings into the stomach through the abdominal wall. Often a cervical esophagostomy will also be done, to allow the saliva which is swallowed to drain out a hole in the neck. Months or years later, the esophagus may be repaired, sometimes by using a segment of bowel brought up into the chest, interposing between the upper and lower segments of esophagus.

Post operative complications sometimes arise, including a leak at the site of closure of the esophagus. Sometimes a stricture, or tight spot, will develop in the esophagus, making it difficult to swallow. This can usually be dilated using medical instruments. In later life, most children with this disorder will have some trouble with either swallowing or heartburn or both.

Tracheomalacia -- a softening of the trachea, usually above the carina (carina of trachea), but sometimes extensive in the lower bronchial tree as well—is another possible serious complication. Even after esophageal repair (anastomosis) the relative flaccidity of former proximal pouch (blind pouch, above) along with esophageal dysmotility can cause fluid buildup during feeding. Owing to proximity, pouch ballooning can cause tracheal occlusion. Severe hypoxia ("dying spells") follows and medical intervention can often be required.

A variety of treatments for tracheomalacia associated with esophageal atresia are available. If not severe, the condition can be managed expectantly since the trachea will usually stiffen as the infant matures into the first year of life. When only the trachea above the carina is compromised, one of the "simplest" interventions is aortopexy wherein the aortic loop is attached to the rear of the sternum, thereby mechanically relieving pressure from the softened trachea. An even simpler intervention is stenting. However, epithelial cell proliferation and potential incorporation of the stent into the trachea can make subsequent removal dangerous.