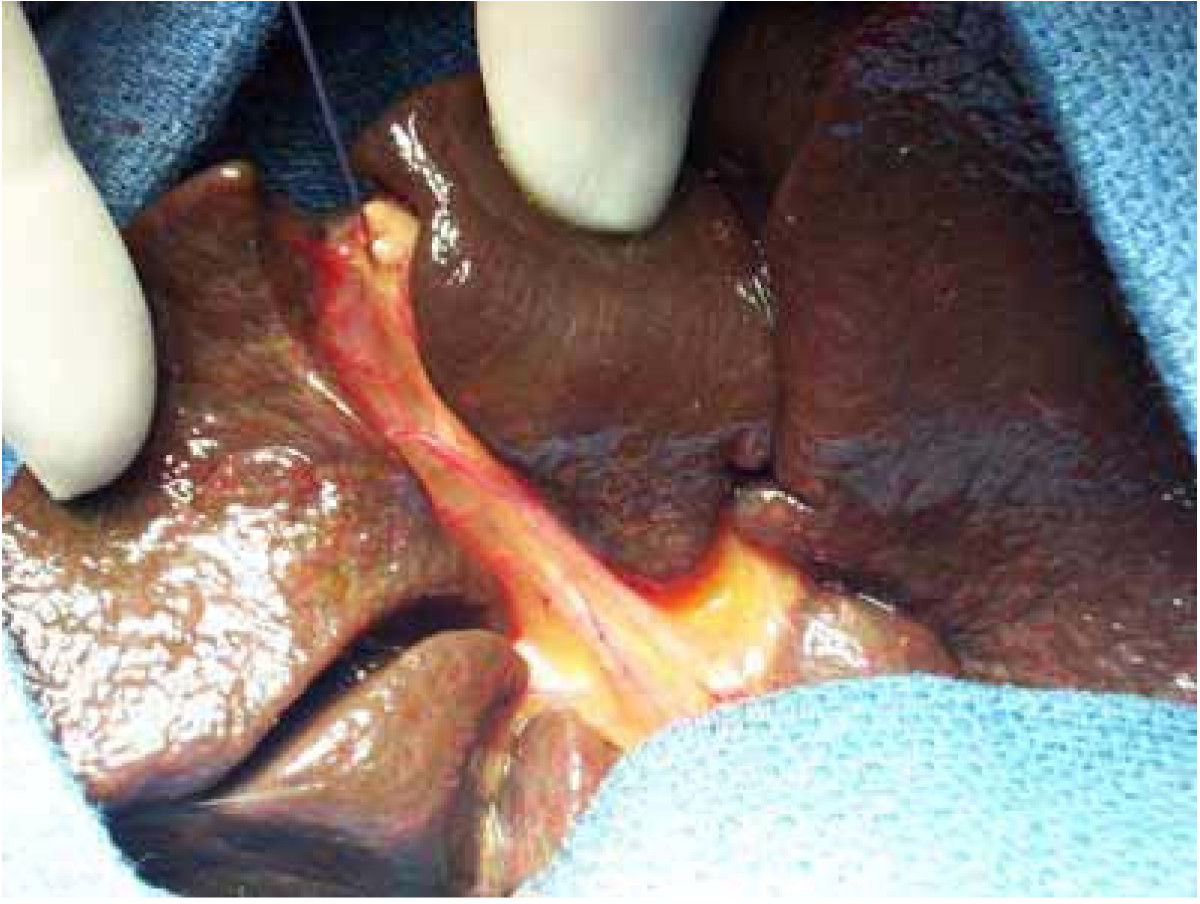 Biliary atresia is a rare condition in newborn infants in which the common between the and the is blocked or absent. If unrecognised, the condition leads to but not (as one might think) to . This is because the liver is still able to conjugate bilirubin, and conjugated bilirubin is unable to cross the blood-brain barrier. The cause of the condition is unknown. The only effective treatments are certain surgeries, or liver transplantation.

Initially, the symptoms are indistinguishable from neonatal jaundice, a common phenomenon. Symptoms are usually evident between two and six weeks after birth. Besides jaundice, other symptoms include pale stools, dark urine, swollen abdominal region and large hardened liver (which may or may not be observable by the naked eye). Prolonged jaundice that is resistant to phototherapy and/or exchange transfusions should prompt a search for secondary causes. By this time, s are generally measured, and these tend to be grossly deranged, is conjugated and therefore does not lead to . Ultrasound investigation or other forms of imaging can confirm the diagnosis. Further testing include radioactive scans of the liver and a .

Biliary atresia is a very rare disorder. About one in 10,000 to 20,000 babies in the U.S are affected every year. Biliary atresia seems to affect girls slightly more often than boys. Within the same family, it is common for only one child in a pair of twins or only one child within the same family to have it. Asians and African-Americans are affected more frequently than Caucasians. There does not appear to be any link to medications or immunizations given immediately before or during pregnancy.

There is no known cause of biliary atresia. There have been many theories about ethiopathogenesis such as Reovirus 3 infection, congenital malformation, congenital CMV infection, autoimmune theory. This means that the etiology and pathogenesis of biliary atresia are largely unknown. However, there have been extensive studies about the pathogenesis and proper management of progressive liver fibrosis, which is arguably one of the most important aspects of biliary atresia patients. As the biliary tract cannot transport bile to the intestine, is retained in the liver (known as stasis) and results in cirrhosis of the liver. Proliferation of the small bile ductules occur, and peribiliary fibroblasts become activated. These "reactive" biliary epithelial cells in cholestasis, unlike normal condition, produce and secrete various cytokines such as CCL-2 or MCP-1, Tumor necrosis factor (TNF), Interleukin-6 (IL-6), TGF-beta, Endothelin (ET), and nitric oxide (NO). Among these, TGF-beta is the most important profibrogenic cytokine that can be seen in liver fibrosis in chronic cholestasis. During the chronic activation of biliary epithelium and progressive fibrosis, afflicted patients eventually show signs and symptoms of portal hypertension (esophagogastric varix bleeding, hypersplenism, hepatorenal syndrome(HRS), hepatopulmonary syndrome(HPS)). The latter two syndromes are essentially caused by systemic mediators that maintain the body within the hyperdynamic states

If the atresia is complete, is the only option. Timely Kasai portoenterostomy (eg < 60 postnatal days) have shown better outcomes. Nevertheless, a considerable number of the patients, even if Kasai portoenterostomy has been successful, eventually undergo liver transplantation within a coule of years after Kasai portoenterostomy.Recent large volume studies from Davenport et al. (Ann Surg, 2008) showed that age of the patient is not an absolute clinical factor affecting the prognosis. In the latter study, influence of the age is different according to the disease ethiologies such as isolated BA, BASM (BA with splenic malformation ), and CBA(cystic biliary atresia).

It is widely accepted that corticosteroid treatment after Kasai operation with/without choleretics and antibiotics have a beneficial effect on the postoperative bile flow and, thereby clear the jaundice of the patients, but the dose and duration of the ideal steroid protocol has been controversial ("blast dose" vs. "High dose" vs. "low dose"). Furthermore, it has been observed in many retrospective longitudinal studies that steroid does not prolong survival of the native liver or transplant-free survival. Davenport at al. also showed (hepatology 2007)that short term low dose steroid therapy after Kasai operation has no effect of the mid and long term prognosis of the post-Kasai biliary atresia patients.