Bronchiolitis obliterans is a lung disease characterized by fixed airway obstruction. Inflammation and scarring occur in the airways of the lung, resulting in severe shortness of breath and dry cough.

FEV1 (forced expiratory volume in 1 second) should be above 80% of predicted values to be considered normal. Bronchiolitis obliterans reduces this to 16% to 21%.

There are many industrial inhalants that are known to cause various types of bronchiolitis, including bronchiolitis obliterans. [5]

Industrial workers who have presented with bronchiolitis: 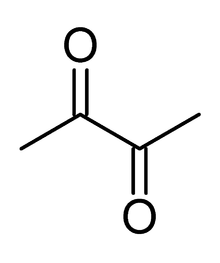 In rare instances, bronchiolitis obliterans may be caused by inhalation of airborne diacetyl, a chemical used to produce the butter-like flavoring[7] in many foods such as candy, microwave popcorn and wines. This first came to public attention when eight former employees of the Gilster-Mary Lee popcorn plant in Jasper, Missouri, developed bronchiolitis obliterans. In 2000, the Missouri Department of Health called in NIOSH to make a determination of the cause, and to recommend safety measures. After surveying the plant and each patient's medical history, NIOSH recommended respiratory protection for all workers in microwave popcorn production. Due to this event, bronchiolitis obliterans began to be referred to in the popular media as "Popcorn Lung" or "Popcorn Workers Lung".[4][8][9]

One heavy consumer of microwaved popcorn has been diagnosed with this disease, which is the first known case involving a consumer.[13]

On 27 August 2007, Weaver Popcorn Company of Indianapolis promised to replace the diacetyl butter flavor ingredient in Pop Weaver popcorn with another flavoring.[14]

On 4 September 2007, the Flavor and Extract Manufacturers recommended reduction of diacetyl in butter-like flavorings. The next day ConAgra Foods announced that it would soon remove diacetyl from its popcorn products.[15]

On 16 January 2008, it was announced that Wayne Watson, the Denver consumer who developed "popcorn lung" after inhaling microwaved popcorn, was suing the Kroger grocery store chain and its affiliates. In the lawsuit, filed in U.S. District Court, Watson's attorney claimed that the companies "failed to warn that preparing microwave popcorn in a microwave oven as intended and smelling the buttery aroma could expose the consumer to an inhalation hazard and a risk of lung injury."[16]

Diacetyl is approved by the Food and Drug Administration as a safe flavor ingredient, but there is evidence to suggest that inhalation in large amounts is dangerous. There are currently no warnings from federal regulators about diacetyl.

Diagnosis may include the following tests:

This disease is irreversible and severe cases often require a lung transplant. Evaluation of interventions to prevent bronchiolitis obliterans relies on early detection of abnormal spirometry results or unusual decreases in repeated measurements.