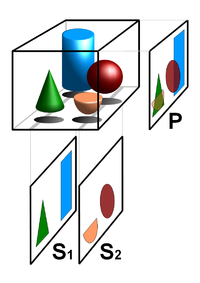 Tomography refers to imaging by sections or sectioning, through the use of any kind of penetrating wave. A device used in tomography is called a tomograph, while the image produced is a tomogram. The method is used in radiology, archaeology, biology, geophysics, oceanography, materials science, astrophysics and other sciences. In most cases it is based on the mathematical procedure called tomographic reconstruction. The word was derived from the Greek word tomos which means "part" or "section", representing the idea of "a section", "a slice" or "a cutting". A tomography of several sections of the body is known as a polytomography.

The word tomography is derived from the Greek tomos ("part") and graphein ("to write").

In conventional medical X-ray tomography, clinical staff make a sectional image through a body by moving an X-ray source and the film in opposite directions during the exposure. Consequently, structures in the focal plane appear sharper, while structures in other planes appear blurred.[1] By modifying the direction and extent of the movement, operators can select different focal planes which contain the structures of interest. Before the advent of more modern computer-assisted techniques, this technique, developed in the 1930s by the radiologist Alessandro Vallebona, proved useful in reducing the problem of superimposition of structures in projectional (shadow) radiography.

In a 1953 article in the medical journal Chest, B. Pollak of the Fort William Sanatorium described the use of planography, another term for tomography.[2]

More modern variations of tomography involve gathering projection data from multiple directions and feeding the data into a tomographic reconstruction software algorithm processed by a computer.[3] Different types of signal acquisition can be used in similar calculation algorithms in order to create a tomographic image. With current (2005) technology, tomograms are derived using several different physical phenomena listed in the following table.

The term volume imaging might subsume these technologies more accurately than the term tomography. However, in the majority of cases in clinical routine, staff request output from these procedures as 2-D slice images. As more and more clinical decisions come to depend on more advanced volume visualization techniques, the terms tomography/tomogram may go out of fashion.

Many different reconstruction algorithms exist. Most algorithms fall into one of two categories: filtered back projection (FBP) and iterative reconstruction (IR). These procedures give inexact results: they represent a compromise between accuracy and computation time required. FBP demands fewer computational resources, while IR generally produces fewer artifacts (errors in the reconstruction) at a higher computing cost.

Discrete tomography and Geometric tomography, on the other hand, are research areas that deal with the reconstruction of objects that are discrete (such as crystals) or homogeneous. They are concerned with reconstruction methods, and as such they are not restricted to any of the particular (experimental) tomography methods listed above.