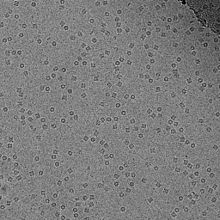 The popularity of cryoelectron microscopy stems from the fact that it allows the observation of specimens that have not been stained or fixed in any way, showing them in their native environment, in contrast to X-ray crystallography, which generally requires placing the samples in non-physiological environments, which can occasionally lead to functionally irrelevant conformational changes. In practice, the resolution of cryo-electron microscopy maps is not high enough to allow for unambiguous model construction on the basis of EM maps only, and models obtained by protein crystallography are used to interpret the cryo-EM maps. However, the resolution of cryo-EM maps is improving steadily, and some virus structures obtained by cryo-EM are already at a resolution that can be interpreted in terms of an atomic model.

A version of electron cryomicroscopy is cryo-electron tomography (CET) where a 3D reconstruction of a sample is created from tilted 2D images.

The problem of the vacuum was partially solved by the introduction of negative stains such as uranium salts (uranyl acetate is perhaps the most common negative stain), but even with negative stains, biological samples are prone to structural collapse upon dehydration of the specimen. Embedding the samples in ice below the sublimation temperature was a possibility that was contemplated early on, but water tends to arrange into a crystalline lattice of lower density upon freezing and this tends to destroy the structure of anything that is embedded in it.

In the early 80's, several groups studying solid state physics were attempting to produce vitreous ice by different means, such as high pressure freezing or flash freezing. Theoretical calculations deemed this task impossible, but in a seminal paper in 1984, the group led by Jacques Dubochet at the European Molecular Biology Laboratory showed images of adenovirus embedded in a vitrified layer of water[citation needed]. This paper is generally considered to mark the birth of cryoelectron microscopy, and the technique has been developed to the point of becoming routine at several laboratories throughout the world.

Consequently, the images are extremely noisy. For some biological systems it is possible to average images to increase the signal-to-noise ratio and retrieve high-resolution information about the specimen using the technique known as single particle analysis. This approach in general requires that the things being averaged are identical, although some limited conformational heterogeneity can now be studied (e.g. ribosome). Three dimensional reconstructions from cryo-EM images of protein complexes and viruses have been solved to sub-nanometer or near-atomic resolution, allowing new insights into the structure and biology of these large assemblies.

Analysis of ordered arrays of protein, such as 2-D crystals of transmembrane proteins or helical arrays of proteins, also allows a kind of averaging which can provide high-resolution information about the specimen. This technique is called electron crystallography.

The thin film method is limited to thin specimens (typically < 500 nm) because the electrons cannot cross thicker samples without multiple scattering events. Thicker specimens can be vitrified by plunge freezing (cryofixation) in ethane (up to tens of μm in thickness) or more commonly by high pressure freezing (up to hundreds of μm). They can then be cut in thin sections (40 to 200 nm thick) with a diamond knife in a cryoultramicrotome at temperatures lower than -135 °C (devitrification temperature). The sections are collected on an electron microscope grid and are imaged in the same manner as specimen vitrified in thin film. This technique is called cryo-electron microscopy of vitreous sections (CEMOVIS) or cryo-electron microscopy of frozen-hydrated sections.

Cryoelectron microscopy has a variety of techniques which can be used.[1] Three most popular ones are: