Angiography or arteriography is a medical imaging technique used to visualize the inside, or lumen, of blood vessels and organs of the body, with particular interest in the arteries, veins and the heart chambers. This is traditionally done by injecting a radio-opaque contrast agent into the blood vessel and imaging using X-ray based techniques such as fluoroscopy.

The word itself comes from the Greek words angeion, "vessel", and graphein, "to write or record". The film or image of the blood vessels is called an angiograph, or more commonly, an angiogram. Though the word itself can describe both an arteriogram and a venogram, in its everyday usage, the terms angiogram and arteriogram are often used synonymously, whereas the term venogram is used more precisely. [1]

The term angiography is strictly defined as based on projectional radiography; however, the term has been applied to newer vascular imaging techniques such as CT angiography and MR angiography. The term isotope angiography has also been used, although this more correctly is referred to as isotope perfusion scanning.

The technique was first developed in 1927 by the Portuguese physician and neurologist Egas Moniz at the University of Lisbon to provide contrasted x-ray cerebral angiography in order to diagnose several kinds of nervous diseases, such as tumors, artery disease and arteriovenous malformations. He is usually recognized as one of the pioneers in this field. Moniz performed the first cerebral angiogram in Lisbon in 1927, and Reynaldo Cid dos Santos performed the first aortogram in the same city in 1929. With the introduction of the Seldinger technique in 1953, the procedure became markedly safer as no sharp introductory devices needed to remain inside the vascular lumen. 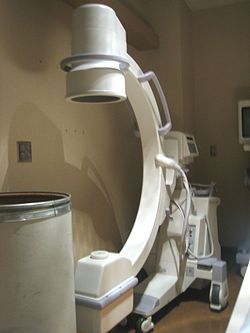 Depending on the type of angiogram, access to the blood vessels is gained most commonly through the femoral artery, to look at the left side of the heart and the arterial system or the jugular or femoral vein, to look at the right side of the heart and the venous system. Using a system of guide wires and catheters, a type of contrast agent (which shows up by absorbing the x-rays), is added to the blood to make it visible on the x-ray images.

The X-ray images taken may either be still images, displayed on a image intensifier or film, or motion images. For all structures except the heart, the images are usually taken using a technique called digital subtraction angiography (DSA). Images in this case are usually taken at 2 - 3 frames per second, which allows the radiologist to evaluate the flow of the blood through a vessel or vessels. This technique "subtracts" the bones and other organs so only the vessels filled with contrast agent can be seen. The heart images are taken at 15-30 frames per second, not using a subtraction technique. Because DSA requires the patient to remain motionless, it cannot be used onthe heart. Both these techniques enable the radiologist or cardiologist to see stenosis (blockages or narrowings) inside the vessel which may be inhibiting the flow of blood and causing pain. 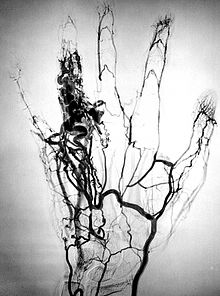 One of most common angiograms performed is to visualize the blood in the coronary arteries. A long, thin, flexible tube called a catheter is used to administer the x-ray contrast agent at the desired area to be visualized. The catheter is threaded into an artery in the forearm, and the tip is advanced through the arterial system into the major coronary artery. X-ray images of the transient radiocontrast distribution within the blood flowing within the coronary arteries allows visualization of the size of the artery openings. Presence or absence of atherosclerosis or atheroma within the walls of the arteries cannot be clearly determined. See coronary catheterization for more detail..

Another increasingly common angiographic procedure is neuro-vascular digital subtraction angiography in order to visualise the arterial and venous supply to the brain. Intervention work such as coil-embolisation of aneurysms and AVM gluing can also be performed.

Angiography is also commonly performed to identify vessel narrowing in patients with leg claudication or cramps, caused by reduced blood flow down the legs and to the feet; in patients with renal stenosis (which commonly causes high blood pressure) and can be used in the head to find and repair stroke. These are all done routinely through the femoral artery, but can also be performed through the brachial or axillary (arm) artery. Any stenoses found may be treated by the use of atherectomy.

Other angiographic uses include the diagnosis of retinal vascular disorders, such as diabetic retinopathy and macular degeneration.

Coronary angiographies are common and major complications are rare. These include Cardiac arrhythmias, kidney damage, blood clots (which can cause heart attack or stroke), hypotension and pericardial effusion. Minor complications can include bleeding or bruising at the site where the contrast is injected, blood vessel damage on the route to the heart from the catheter (rare) and allergic reaction to the contrast.[2]

Major complications in Cerebral Angiography are also rare but include stroke, an allergic reaction to the anaesthetic other medication or the contrast medium, blockage or damage to one of the access veins in the leg, or thrombosis and embolism formation. Bleeding or bruising at the site where the contrast is injected are minor complications, delayed bleeding can also occur but is rare.[2]

The horror movie The Exorcist (1973) featured a scene in which the protagonist, a young girl, is subjected to carotid angiography. The scene was portrayed accurately by medical personnel—rather than actors—who regularly performed the procedure in real life. Although the movie as a whole is often cited as one of the most frightening motion pictures of all time, this angiography scene was the scene most likely to upset audiences, according to the director, William Friedkin.