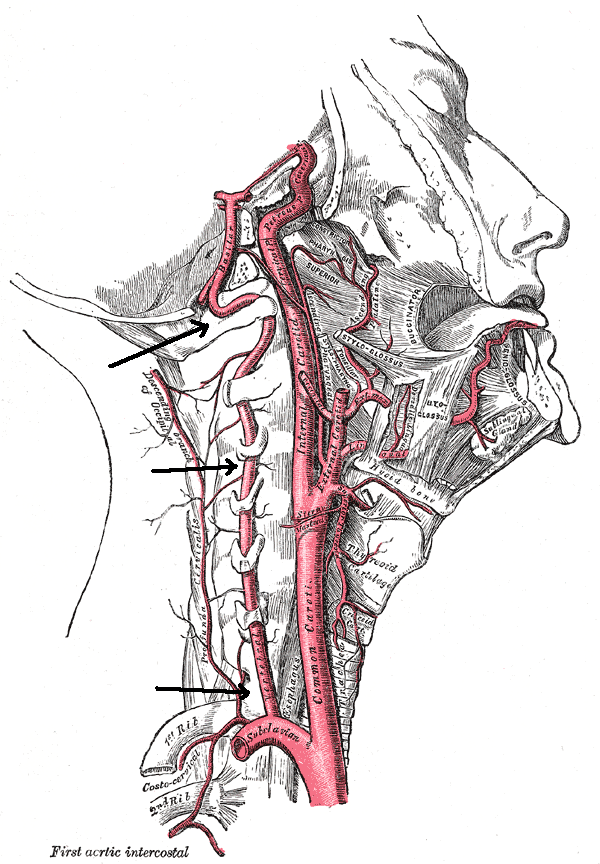 Caption = Arteries of the neck. The vertebral arteries arise from the subclavian arteries and join to form the . It is ponted out, centermost of the three vertical arteries. 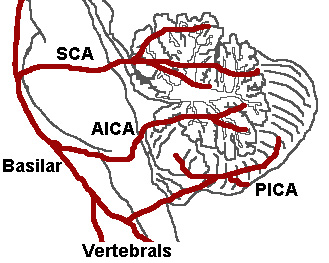 The two vertebral arteries and the are sometimes together called the vertebrobasilar system, which supplies blood to the posterior part of and anastomoses with blood supplied to the anterior part of the circle of Willis from the carotid arteries.

They arise, one on each side of the body, then enter deep to the transverse process of the level of the 6th (C6).

It then proceeds superiorly, in the (foramen transversarium) of each until C1.

This path is largely parallel to, but distinct from, the route of the ascending through the neck.

At the C1 level the vertebral arteries travel across the posterior arch of the atlas before entering the .

Inside the skull, the two vertebral arteries join up to form the at the base of the .

The is the main blood supply to the and connects to the to potentially supply the rest of the brain if there is compromise to one of the carotids.

At each cervical level, the vertebral artery sends branches to the surrounding musculature via .

The vertebral artery may be divided into four parts:

The first part runs upward and backward between the and the .

Behind it are the transverse process of the seventh , the and its .

The second part runs upward through the in the of the upper six cervical vertebræ, and is surrounded by branches from the inferior cervical sympathetic ganglion and by a plexus of veins which unite to form the vertebral vein at the lower part of the neck.

It is situated in front of the trunks of the cervical nerves, and pursues an almost vertical course as far as the , above which it runs upward and lateralward to the foramen in the transverse process of the atlas.

The third part issues from the latter foramen on the medial side of the , and curves backward behind the , the anterior ramus of the first cervical nerve being on its medial side; it then lies in the groove on the upper surface of the posterior arch of the atlas, and enters the vertebral canal by passing beneath the .

This part of the artery is covered by the and is contained in the —a triangular space bounded by the , the , and the .

The first cervical or lies between the artery and the of the atlas.

The fourth part pierces the and inclines medialward to the front of the ; it is placed between the and the anterior root of the first cervical nerve and beneath the first digitation of the .

At the lower border of the it unites with the vessel of the opposite side to form the .