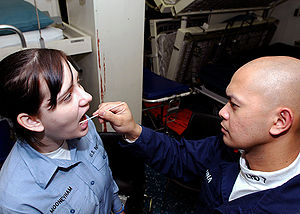 Cheek swab being obtained from a potential donor

National Marrow Donor Program® (NMDP)Be The Match is the global leader in providing marrow and umbilical cord blood transplants to patients with leukemia, lymphoma and other diseases. The nonprofit organization matches patients with donors, educates health care professionals and conducts research so more lives can be saved. The NMDP also operates Be The Match®, which provides support for patients, and enlists others in the community to contribute financially, volunteer, and join the Be The Match Registry® – the world’s largest listing of potential marrow donors and donated cord blood units.

Be The Match registry is the world's largest adult donor and cord blood registry, listing more than 9 million individuals and more than 185,000 cord blood units. Hematopoietic cells from donors or cord blood units are used to transplant patients with a variety of blood, bone marrow or immune system disorders. As of January 2010, the NMDP had facilitated more than 43,000 transplants worldwide.

Bone marrow and PBSCs come from living adult donors. PBSCs are collected from the donor's blood after five or six days of taking a drug that causes Blood (hematopoietic) cells in the bone marrow to move into the circulating blood. About 60% of donations are made in this way. The second way to donate cells is by extracting bone marrow from the donor's pelvic bones while the donor is under anesthesia. In both cases, recovery is usually swift and donors typically have fully restored marrow and blood cell counts in under two weeks.

Cord blood cells are obtained from the umbilical cord and placenta of a newborn baby after the cord is clamped and cut as in a normal delivery. The cord blood is then stored frozen in a bank until needed for a transplant. The baby is not harmed in any way by this collection, as the cord blood is collected from tissues that in the past had been discarded as medical waste.

The need for large registries

The remaining 70% require an unrelated hematopoietic cell donor as a transplant source. Because the odds that two random individuals are HLA matched exceeds one in 20,000, a registry's success depends on a large number of volunteer donors.

How the NMDP operates

The NMDP coordinates hematopoietic cell transplants by managing a worldwide network of affiliated organizations. These organizations (mostly hospitals and blood banks) have established relationships with the NMDP and work together to arrange the collection and transfer of donated bone marrow or PBSCs, or the transfer of previously collected cord blood.

When an adult volunteer donor (marrow or PBSC) registers with the NMDP, their HLA and contact information is sent to the NMDP, which stores in their computers. The NMDP also has more than 160,000 cord blood units, listed by HLA type, in its Be The Match registry. These cord blood units are stored at 26 NMDP-affiliated cord blood banks around the world.

Physicians look for donor material on behalf of a patient by submitting the patient’s HLA tissue type to the NMDP, which then searches its computerized database for matching donor (marrow or PBSC) or cord blood units.

If NMDP finds a match to a cord blood unit, it will notify the cord blood bank that stores that unit and arrange to send it to the patient. Cord blood units are shipped frozen, in specially designed coolers, and are thawed after arrival at the patient's hospital. The transplant physician evaluating the patient considers a number of clinical factors to decide whether to use an adult donor's marrow or PBSC, or cord blood for a particular patient.

The NMDP cooperates with Bone Marrow Donors Worldwide (BMDW), an organization that coordinates communications among the world’s registries. BMDW is based in Leiden, The Netherlands. Throughout the world, there are an estimated ten million volunteer hematopoietic cell donors. Most national registries, including the NMDP's Be The Match registry, have access to these worldwide volunteer donors, either through the BMDW or through individually arranged agreements.

Although based in the United States, the NMDP has worldwide connections. More than 50 percent of the transplants arranged by the NMDP involve either a foreign patient or a foreign donor. The NMDP contracts with seven donor centers (where donors are recruited) outside of the United States. These are located in The Netherlands, Israel, Sweden, Norway, and Germany (three centers).

In addition, the NMDP is affiliated with many transplant centers (where patients can receive transplants using cells from NMDP donors) outside of the United States.

Although the NMDP operates the sole federally funded and Congressionally authorized stem cell registry in the United States, three other smaller registries exist.[1]

In July 2007, the Caitlin Raymond International Registry became an affiliated registry with the NMDP.

The NMDP receives annually about US$ 23 million from the US government through the Health Resources and Services Administration. The US Navy also provides some funding.[2]

The latter charge amounts to about $21,000, which is somewhat more than other registries in the US and abroad charge.[5] (The final cost to the patient or his/her insurance company for the completed transplant can range from $100,000 to $250,000.[6])

The NMDP pays affiliated donor centers and recruitment groups for every new donor they sign up.[5]