Artificial respiration is the act of assisting or stimulating respiration, a metabolic process referring to the overall exchange of gases in the body by pulmonary ventilation, external respiration, and internal respiration.[1] Assistance takes many forms, but generally entails providing air for a person who is not breathing or is not making sufficient respiratory effort on their own[2] (although it must be used on a patient with a beating heart or as part of cardiopulmonary resuscitation to achieve the internal respiration).

Pulmonary anton ventilation (and hence external parts of respiration) is achieved through manual insufflation of the lungs either by the rescuer blowing into the patient's lungs, or by using a mechanical device to do so. This method of insufflation has been proved more effective than methods which involve mechanical manipulation of the patient's chest or arms, such as the Silvester method.[3] It is also known as Expired Air Resuscitation (EAR), Expired Air Ventilation (EAV), mouth-to-mouth resuscitation, rescue breathing or colloquially the kiss of life. 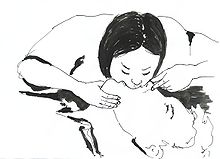 Insufflation, also known as 'rescue breaths' or 'ventilations', is the act of mechanically forcing air into a patient's respiratory system. This can be achieved via a number of methods, which will depend on the situation and equipment available. All methods require good airway management to perform, which ensures that the method is effective. These methods include: 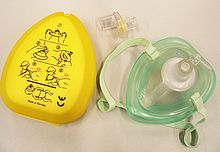 Most training organisations recommend that in any of the methods involving mouth to patient, that a protective barrier is used, to minimise the possibility of cross infection (in either direction).[7]

Barriers available include pocket masks and keyring-sized face shields. These barriers are an example of Personal Protective Equipment to guard the face against splashing, spraying or splattering of blood or other potentially infectious materials.

These barriers should provide a one-way filter valve which lets the air from the rescuer deliver to the patient while any substances from the patient (e.g. vomit, blood) cannot reach the rescuer. Many adjuncts are single use, though if they are multi use, after use of the adjunct, the mask must be cleaned and autoclaved and the filter replaced.

The CPR mask is the preferred method of ventilating a patient when only one rescuer is available. Many feature 18mm inlets to support supplemental oxygen, which increases the oxygen being delivered from the approximate 17% available in the expired air of the rescuer to around 40-50%.

Tracheal intubation is often used for short term mechanical ventilation. A tube is inserted through the nose (nasotracheal intubation) or mouth (orotracheal intubation) and advanced into the trachea. In most cases tubes with inflatable cuffs are used for protection against leakage and aspiration. Intubation with a cuffed tube is thought to provide the best protection against aspiration. Tracheal tubes inevitably cause pain and coughing. Therefore, unless a patient is unconscious or anesthetized for other reasons, sedative drugs are usually given to provide tolerance of the tube. Other disadvantages of tracheal intubation include damage to the mucosal lining of the nasopharynx or oropharynx and subglottic stenosis.

In an emergency a Cricothyrotomy can be used by health care professionals, where an airway is inserted through a surgical opening in the cricothyroid membrane. This is similar to a tracheostomy but a cricothyrotomy is reserved for emergency access. This is usually only used when there is a complete blockage of the pharynx or there is massive maxillofacial injury, preventing other adjunts being used.[8]

Efficiency of mouth to patient insufflation

Normal atmospheric air contains approximately 21% oxygen when created in. After gaseous exchange has taken place in the lungs, with waste products (notably carbon dioxide) moved from the bloodstream to the lungs, the air being exhaled by humans normally contains around 17% oxygen. This means that the human body utilises only around 19% of the oxygen inhaled, leaving over 80% of the oxygen available in the exhalatory breath.[9]

This means that there is more than enough residual oxygen to be used in the lungs of the patient, which then crosses the cell membrane to form oxyhemoglobin. 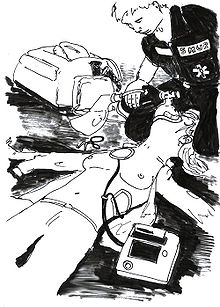 Typical view of resuscitation in progress with a BVM in use

The efficiency of artificial respiration can be greatly increased by the simultaneous use of oxygen therapy. The amount of oxygen available to the patient in mouth to mouth is around 16%. If this is done through a pocket mask with an oxygen flow, this increases to 40% oxygen. If a Bag Valve Mask or mechanical respirator is used with an oxygen supply, this rises to 99% oxygen. The greater the oxygen concentration, the more efficient the gaseous exchange will be in the lungs.