Esophageal varices are diagnosed with endoscopy.[1]

Normal portal pressure is approximately 9 mmHg compared to an inferior vena cava pressure of 2-6 mmHg. This creates a normal pressure gradient of 3-7 mmHg. If the portal pressure rises above 12 mmHg, this gradient rises to 7-10 mmHg.[2] A gradient greater than 5 mmHg is considered portal hypertension. At gradients greater than 10 mmHg, blood flow though the hepatic portal system is redirected from the liver into areas with lower venous pressures. This means that collateral circulation develops in the lower esophagus, abdominal wall, stomach, and rectum. The small blood vessels in these areas become distended, becoming more thin-walled, and appear as varicosities. In addition, these vessels are poorly supported by other structures, as they are not designed for high pressures.

Varices can also form in other areas of the body, including the stomach (gastric varices), duodenum (duodenal varices), and rectum (rectal varices). Treatment of these types of varices may differ. 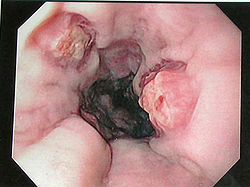 In emergency situations, the care is directed at stopping blood loss, maintaining plasma volume, correcting disorders in coagulation induced by cirrhosis, and appropriate use of antibiotics (usually a quinolone or ceftriaxone, as infection by gram-negative strains is either concomitant, or a precipitant).

In cases of refractory bleeding, balloon tamponade with Sengstaken-Blakemore tube may be necessary, usually as a bridge to further endoscopy or treatment of the underlying cause of bleeding (usually portal hypertension). Methods of treating the portal hypertension include: transjugular intrahepatic portosystemic shunt (TIPS), or a distal splenorenal shunt procedure or a liver transplantation.

Nutritional supplementation is not necessary if the patient is not eating for four days or less.[3]

Ideally, patients with known varices should receive treatment to reduce their risk of bleeding.[5] The non-selective β-blockers (e.g., propranolol 10 mg PO TID, timolol or nadolol 20 mg PO OD) and nitrates (e.g. isosorbide mononitrate (IMN) 20 mg BD to TID) have been evaluated for secondary prophylaxis. Non-selective β-blockers (but not cardioselective β-blockers like atenolol) are preferred because they decrease both cardiac output by β1 blockade and splanchnic blood flow by blocking vasodilating β2 receptors at splanchnic vasculature. The effectiveness of this treatment has been shown by a number of different studies.[6]

Unfortunately, non-selective β-blockers do not prevent the formation of esophageal varices.[7]

Dilated submucosal veins are the most prominent histologic feature of esophageal varices. The expansion of the submucosa leads to elevation of the mucosa above the surrounding tissue which is apparent during endoscopy and is a key diagnostic feature. Evidence of recent variceal hemorrhage includes necrosis and ulceration of the mucosa. Evidence of past variceal hemorrhage includes inflammation and venous thrombosis.