Nevus
Not to be confused with Naevius, Nevis, or Nevius.
"Naevus" and "Nevi" redirect here. For the British experimental rock group, see Naevus (band). For the Eritrean footballer, see Nevi Ghebremeskez. For the Norwegian bank, see Nevi (company).

Nevus (or naevus, plural nevi or naevi, from nævus, Latin for "birthmark") is the medical term for sharply-circumscribed[1] and chronic lesions of the skin. These lesions are commonly named birthmarks and moles. Nevi are benign by definition. Using the term nevus and nevi loosely, most physicians and dermatologists are actually referring to a variant of nevus called the "Melanocytic nevus", which are composed of melanocytes. Histologically, melanocytic nevi are differentiated from lentigines (also a type of benign pigmented macule) by the presence of nests of melanocytes, which lentigines (plural form of lentigo) lack. 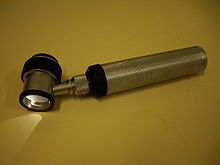 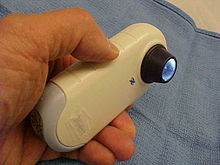 Clinical diagnosis of a melanocytic nevus from other nevi can be made with the naked eye using the ABCD guideline, or using dermatoscopy. The main concern is distinguishing between a benign nevus, a dysplastic nevus, and a melanoma. Other skin tumors can resemble a melanocytic nevus clinically, such as a seborrheic keratosis, pigmented basal cell cancer, hemangiomas, and sebaceous hyperplasia. A skin biopsy is required when clinical diagnosis is inadequate or when malignancy is suspected.

All melanocytic nevi will change with time - both congenital and acquired nevi. The "normal" maturation is evident as elevation of the lesion from a flat macule to a raised papule. The color change occurs as the melanocytes clump and migrate from the surface of the skin (epidermis) down deep into the dermis. The color will change from even brown, to speckled brown, and then losing the color and becomes flesh colored or pink. During the evolution, uneven migration can make the nevi look like melanomas, and dermatoscopy can help in differentiation between the benign and malignant lesions.[2]