A xanthoma (pl. xanthomas or xanthomata) (condition: xanthomatosis), from Greek xanthos, ξανθος, "yellow", is a deposition of yellowish cholesterol-rich material in tendons or other body parts in various disease states.[1] They are cutaneous manifestations of lipidosis in which there is an accumulation of lipids in large foam cells within the skin.[1] 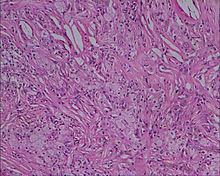 They are associated with hyperlipidemias, both primary and secondary types.

A xanthelasma is a sharply demarcated yellowish collection of cholesterol underneath the skin, usually on or around the eyelids. Strictly, a xanthelasma is a distinct condition, only being called a xanthoma when becoming larger and nodular, assuming tumorous proportions.[2] Still, it is often classified simply as a subtype of xanthoma.[3]

Xanthoma tuberosum is characterized by xanthomas located over the joints.[1]:530

Xanthoma tendinosum (also known as "Tendinous xanthoma"[4]) is clinically characterized by papules and nodules found in the tendons of the hands.[1]:531

Eruptive xanthoma (ILDS E78.220) is clinically characterized by small, yellowish-orange to reddish-brown papules that appear all over the body.[1]:531

Palmar xanthoma is clinically characterized by yellowish plaques that involve the palms and flexural surfaces of the fingers.[1]:531 Plane xanthomas are characterised by yellowish to orange, flat macules or slightly elevated plaques, often with a central white area which may be localised or generalised. They often arise in the skin folds, especially the palmar creases. They occur in hyperlipoproteinaemia type III and type IIA, and in association with biliary cirrhosis. The presence of palmar xanthomata, like the presence of tendinous xanthomata, is indicative of hypercholesterolaemia.