Onychomycosis (also known as "dermatophytic onychomycosis,"[1] "ringworm of the nail,"[1] and "tinea unguium"[1]) means fungal infection of the nail.[2] It is the most common disease of the nails and constitutes about a half of all nail abnormalities.[3]

This condition may affect toenails or fingernails, but toenail infections are particularly common. The prevalence of onychomycosis is about 6-8% in the adult population.[4]

There are four classic types of onychomycosis:[5] 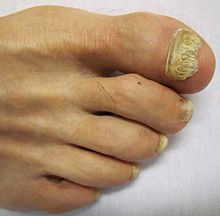 The nail plate can have a thickened, yellow, or cloudy appearance. The nails can become rough and crumbly, or can separate from the nail bed. There is usually no pain or other bodily symptoms, unless the disease is severe.[7]

Dermatophytids are fungus-free skin lesions that sometimes form as a result of a fungus infection in another part of the body. This could take the form of a rash or itch in an area of the body that is not infected with the fungus. Dermatophytids can be thought of as an allergic reaction to the fungus. People with onychomycosis may experience significant psychosocial problems due to the appearance of the nail. This is particularly increased when fingernails are affected.[8]

Trichophyton rubrum is the most common dermatophyte involved in onychomycosis. Other dermatophytes that may be involved are T. interdigitale, Epidermophyton floccosum, T. violaceum, Microsporum gypseum, T. tonsurans, T. soudanense (considered by some to be an African variant of T. rubrum rather than a full-fledged separate species) and the cattle ringworm fungus T. verrucosum. A common outdated name that may still be reported by medical laboratories is Trichophyton mentagrophytes for T. interdigitale. The name T. mentagrophytes is now restricted to the agent of favus skin infection of the mouse; though this fungus may be transmitted from mice and their danders to humans, it generally infects skin and not nails.

Other causative pathogens include Candida and nondermatophytic molds, in particular members of the mold generation Scytalidium (name recently changed to Neoscytalidium), Scopulariopsis, and Aspergillus. Candida spp. mainly cause fingernail onychomycosis in people whose hands are often submerged in water. Scytalidium mainly affects people in the tropics, though it persists if they later move to areas of temperate climate.

Other molds more commonly affect people older than 60 years, and their presence in the nail reflects a slight weakening in the nail's ability to defend itself against fungal invasion.

Treatment of onychomycosis is challenging because the infection is embedded within the nail and is difficult to reach. As a result, full removal of symptoms is very slow and may take a year or more.

Most treatments are either systemic antifungal medications, such as terbinafine and itraconazole, or topical, such as nail paints containing ciclopirox or amorolfine. There is also evidence for combining systemic and topical treatments.[13]

For superficial white onychomycosis, systemic rather than topical antifungal therapy is advised.[14]

In July 2007, a meta-study reported on clinical trials for topical treatments of fungal nail infections. The study included six randomised, controlled trials dating up to March 2005.[15] The main findings are:

A Noveon-type laser, already in use by physicians for some types of cataract surgery, is used by some podiatrists, although the only scientific study on its efficacy, while showing positive results, included far too few test subjects for the laser to be proven generally effective.[20]

In 2011, several lasers were seeking approval and two been cleared by the Food and Drug Administration.[21]

Light Age, Inc. has approval to market a Nd:YAG laser for onychomycosis treatment.[22]

As with many diseases, there are also some scientifically unverified folk or alternative medicine remedies.

A 2003 survey of diseases of the foot in 16 European countries found onychomycosis to be the most frequent fungal foot infection and estimates its prevalence at 27%.[33][34] Prevalence was observed to increase with age. In Canada, the prevalence was estimated to be 6.48%.[35] Onychomycosis affects approximately one-third of diabetics[36] and is 56% more frequent in people suffering from psoriasis.[37]

Most drug development activities are focused on the discovery of new antifungals and novel delivery methods to promote access of existing antifungal drugs into the infected nail plate. Active clinical trials investigating onychomycosis:[38]