Leukonychia (or leuconychia), also known as white nails,[1] is a medical term for white discoloration appearing on nails.[2]:658-9 It is derived from the Greek words leuko ("white") and onyx ("nail"). The most common cause is injury to the base of the nail (the matrix) where the nail is formed.

The presence of leukonychia is not a sign of a lack of vitamin or calcium in the diet, is harmless and may be caused simply from a minor injury that occurs when the nail is growing and that it is much more common on fingernails than toenails. There is no effective treatment for Leukonychia although reducing minor injury to the nails prevents the white marks and spots that will gradually disappear as the nail grows outward from the matrix with the nail plate and eventually disappear. [3]

This condition is a whitening of the entire nail. This may be due to hypoalbuminaemia (low albumin), which is caused by the nephrotic syndrome (a form of kidney failure), liver failure, protein malabsorption and protein-losing enteropathies. A genetic condition, and a side effect of sulphonamides, a family of antibiotics can also cause this appearance.[4][5] 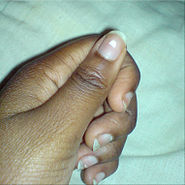 Leukonychia on the thumbnail

This condition is whitening of parts of the nail. Generally characterised by white dots. There are several types of this condition.

This is a whitening or discoloration of the nail in bands or "stria" that run parallel the lunula (nail base). It may be caused by cirrhosis, chemotherapy,[6] or physical injury to the nail matrix (e.g., excessive nail "tapping", or slamming in a car door).[7][8][9] Alternatively, the condition can be caused by arsenic, lead, or other heavy metal poisoning.[citation needed] The tendency toward leukonychia striata is sometimes inherited in an autosomal dominant fashion. In other cases, it can be attributed to vigorous manicuring, to trauma, or to a wide variety of systemic illnesses. In many patients, there is no obvious cause, and the streaks resolve spontaneously. [10]

There is a similar condition called Muehrcke's lines which differs from leukonychia in that the lines run across the entire nail bed and occur in more than one nail.

Also known as "true" leukonychia, this is the most common form of leukonychia, in which small white spots appear on the nails. Picking and biting of the nails are a prominent cause in young children and nail biters.

In most cases, when white spots appear on a single or a couple of fingers or toes, the most common cause is injury to the base (matrix) of the nail. When this is the case, white spots disappear after around eight weeks, which is the amount of time necessary for nails to regrow completely.[11]

A doctor will take a thorough medical history, and may test liver and kidney function.