Several circus sideshow performers in the 19th and early 20th centuries, such as Julia Pastrana, had hypertrichosis.[6] Many of them worked as freaks and were promoted as having distinct human and animal traits. 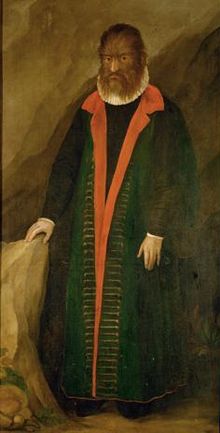 The first recorded case of hypertrichosis was Petrus Gonzales of the Canary Islands.[7] This was documented by Altrovandus in 1648.[7][8] He noted in Gonzales' family that two daughters, a son, and a grandchild all had hypertrichosis. Altrovandus dubbed them the Ambras family, after the Ambras castle near Innsbruck, where portraits of the family were found.[7] During the next 300 years approximately 50 cases were observed. The scientist Rudolf Virchow described a form of hypertrichosis accompanied by gingival hyperplasia in 1873.[7]

Congenital terminal hypertrichosis is characterized by the presence of fully pigmented terminal hair that covers the entire body.[3] This condition is usually accompanied by gingival hyperplasia.[3] This form is most responsible for the term "Werewolf Syndrome" because of the thick dark hair that appears.[3] People with this condition are sometimes performers at circuses because of their unusual appearance.[3]

Congenital localized hypertrichosis is a localized increase in hair density and length.[4]

Nevoid hypertrichosis may be present at birth or appear later in life.[3] It features an isolated area of excessive terminal hair and is usually not related to any other diseases.[3][12]

Acquired hypertrichosis appears after birth. There are multiple causes, including the side effects of drugs, associations with cancer, and possible links with eating disorders. Acquired forms of hypertrichosis can usually be reduced with various treatments.

Acquired hypertrichosis lanuginosa is characterized by rapid growth of lanugo hair, particularly on the face.[13][14] Hair also appears on the trunk and armpits, while palms and soles are unaffected.[14] The excess hair is commonly referred to as malignant down.[14] This hair is very fine and unpigmented.[14]

Acquired generalized hypertrichosis commonly affects the cheeks, upper lip, and chin.[3][4] This form also affects the forearms and legs; however, it is less common in these areas. Another deformity associated with acquired generalized hypertrichosis is multiple hairs occupying the same follicle. It may also include abnormal hair growth patterns as what happens to the eyelashes in a condition known as trichiasis.[4] Oral minoxidil treatments for hypertension are known to cause this condition. Topical minoxidil used for alopecia causes hair growth in the areas it is applied to, however this hair disappears shortly after discontinuing the use of topical minoxidil.[15]

Acquired localized hypertrichosis is an increase in hair density and length often secondary to irritation or trauma.[16] This form is restricted to certain areas of the body.

Hirsutism is both congenital and acquired. It is linked to excessive male hormones in women, thus symptoms may include acne, deepening of the voice, irregular menstrual periods, and the formation of a more masculine body shape.[17] An increase in androgen (male hormone) levels are the primary cause of most hirsutism cases.[18] Hirsutism caused by increased levels of androgens can be treated with medications that reduce androgen levels. Some birth control pills and spironolactone reduce androgen levels.[17] 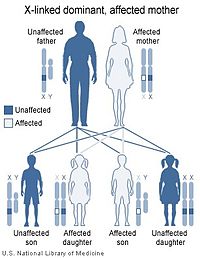 Patterns of inheritance of females with sex linked forms of hypertrichosis 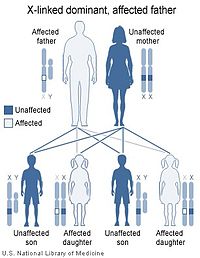 Patterns of inheritance of males with sex linked forms of hypertrichosis

Congenital hypertrichosis lanuginosa may be caused by a mutation on the 8q chromosome;[1] however, it could also be possibly the result of a spontaneous genetic mutation rather than inheritance.[7] This form is a dominant autosomal (not located on the sex chromosomes) cutaneous disorder, that affects the skin.[20]

Congenital generalized hypertrichosis has a dominant pattern of inheritance and has been linked to chromosome x24-q27.1.[1][21] A female carrying the hypertrichosis gene has a 50% chance of passing it to her offspring. A male carrier will pass this form of hypertrichosis to his daughters, but never the sons.

Congenital generalized hypertrichosis terminalis is thought to be caused by genetic changes on chromosome 17 resulting in the addition or removal of millions of nucleotides.[22] The gene MAP2K6 may be a factor contributing to this condition. This condition may also be due to the change in the chromosome affecting the transcription of genes.[23]

Acquired hypertrichosis lanuginosa is commonly present with cancer.[24] This condition is also linked to metabolic disorders, such as anorexia, hormone imbalances, such as hyperthyroidism, or as a side effect of certain drugs.[24]

A number of mechanisms can lead to hypertrichosis. One cause involves areas of the skin that are transforming from the small vellus type to the larger terminal type.[9] This change normally occurs during adolescence, when vellus hair follicles in the underarms and groin grow into terminal hair follicles.[1] Hypertrichosis involves this same type of switching, but in areas that do not normally produce terminal hair.[1] The mechanisms for this switch are poorly understood.[1]

Hypertrichosis is diagnosed clinically via the occurrence of hair in excess of what is expected for age, sex, and ethnicity in areas that are not androgen-sensitive.[9] The excess can be in the form of excessive length or density and may consist of any hair type (lanugo, vellus, or terminal).[19]

Temporary hair removal may last from several hours to several weeks, depending on the method used. These procedures are purely cosmetic.[2] Depilation methods, such as trimming, shaving, and depilatories, remove hair to the level of the skin and produce results that last several hours to several days.[28] Epilation methods, such as plucking, electrology, waxing, sugaring, threading, remove the entire hair from the root, the results lasting several days to several weeks.[28]

Medication to reduce production of hair is currently under testing. One medicinal option suppresses testosterone by increasing the sex hormone-binding globulin.[29] Another controls the overproduction of hair through the regulation of a luteinizing hormone.[29]

People with hypertrichosis often found jobs as circus performers, making the best of their unusual appearance. Fedor Jeftichew ("Jo-Jo the Dog-Faced Man"), Stephan Bibrowski ("Lionel the Lion-Faced Man"), Jesus "Chuy" Aceves ("Wolfman"), and Annie Jones ("the bearded woman"), all had hypertrichosis.[7] Extensive hypertrichosis carries an emotional burden and can cause cosmetic embarrassment; however, some people attempt no treatments because they say it defines who they are.[2][31]

Julia Pastrana (1834–1860)[6] traveled throughout the United States in a freak show as the bearded lady, capturing the attention of many artists.[6] She is portrayed as having dark extensive hairs distributed equally throughout the surface of her body, even on the palms of her hands.[6] Originally, she was believed to have congenital hypertrichosis lanuginosa; however, the generalized form of the syndrome coupled with her gingival hyperlasia indicated that her condition was congenital terminal hypertrichosis.[6][7] This was not confirmed until after her death, when it became clear that her X-linked syndrome resulted in terminal hairs.[7]

In 2011, Supatra Sasuphan (Thai: สุพัตรา สะสุพันธ์; born August 5, 2000)[32], an 11-year old girl from Thailand with hypertrichosis was named the world's hairiest girl by the Guinness Book of World Records.[33]

The hairy family of Burma

One record in history concerning congenital hypertrichosis lanuginosa is the hairy family of Burma, a four-generational pedigree of the disease. In 1826, John Crawford was leading a mission for the Governor-General of India through Burma.[34] He tells of meeting a hairy man, Shwe-Maong. Shwe-Maong lived in the court of King Ava and acted as an entertainer.[34] Shwe-Maong had four children: three normal children, and one child with congenital hypertrichosis, named Maphoon.[34] On a second mission to Ava, Maphoon was described as a thirty year old woman with two sons, one of which had hypertrichosis.[34] The affected son was named Maong-Phoset. He had an affected daughter named Mah-Me.[34] Whereas all affected members of the family had dental problems, the unaffected members had perfect teeth.[34]