A freak show is an exhibition of biological rarities, referred to as "freaks of nature". Typical features would be physically unusual humans, such as those uncommonly large or small, those with both male and female secondary sexual characteristics, people with other extraordinary diseases and conditions, and performances that are expected to be shocking to the viewers. Heavily tattooed or pierced people have sometimes been seen in freak shows, as have attention-getting physical performers such as fire-eating and sword-swallowing acts. 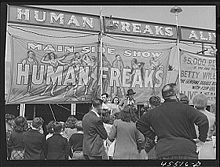 Freak shows were popular in the United States from the mid 19th to mid 20th centuries, and were often, but not always, associated with circuses and carnivals. Some shows also exhibited deformed animals (such as two-headed cows, one-eyed pigs, and four-horned goats) and famous hoaxes, or simply "science gone wrong" exhibits (such as deformed babies).

Changes in popular culture and entertainment, and changing attitudes about physical differences, led to the decline of the freak show as a form of entertainment. As previously mysterious anomalies were scientifically explained as genetic mutations or diseases, freaks became the objects of sympathy rather than fear or disdain. Laws were passed restricting freak shows for these reasons. For example, Michigan law forbids the "exhibition [of] any deformed human being or human monstrosity, except as used for scientific purposes".[1] However, in many places freak shows are still popular features.

The exhibition of human oddities has a long history:

1704–1718
Peter the Great collected human oddities at the Kunstkammer in what is now St. Petersburg, Russia.[3]

1738
The exhibition of a creature who "was taken in a wook at Guinea; 'tis a female about four feet high in every part like a woman excepting her head which nearly resembles the ape."[4]

1932
Tod Browning's Pre-Code-era film Freaks tells the story of a traveling freakshow. The use of real freaks in the film provoked public outcries, and the film was relegated to obscurity until its re-release at the 1962 Cannes Film Festival.[6]

1960
Albert-Alberta Karas[7] (two siblings, each half man, half woman) exhibits with Bobby Reynolds on sideshow tour.

1992
Grady Stiles (the lobster boy) is shot in his home in Gibsonton, Florida.[8]

2000–2010
Ken Harck's Brothers Grim Sideshow debuted at the Great Circus Parade in Milwaukee, WI. The Milwaukee run included a fat lady and bearded lady Melinda Maxi, as well as self made freaks The Enigma and Katzen. In later years the show has included Half-boy Jesse Stitcher and Jesus "Chuy" Aceves the Mexican Werewolf Boy and Stalking Cat. Bros. Grim toured with the Ozz Fest music festival in 2006,2007 and 2010.[9]

2005
"999 Eyes Freakshow" founded, touting itself as the "last genuine traveling freakshow in the United States." 999 Eyes portrays freaks in a very positive light, insisting that "what is different is beautiful." Freaks include Black Scorpion.[10]

2007
Wayne Schoenfeld bring together several sideshow performers to "The L.A. Circus Congress of Freaks and Exotics," to photograph sideshows folks for "Cirque Du Soleil - Circus of the Past." In attendance were: Bill Quinn, the halfman; Percilla, the fat lady; Mighty Mike Murga the Mighty Dwarf; Dieguito El Negrito, a wildman; fireeaters; sword swallowers, and more.[11][12] 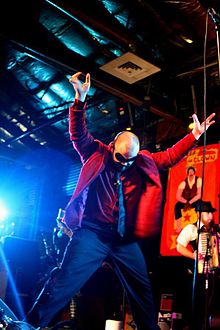 The entertainment appeal of the traditional "freak shows" is arguably echoed in numerous programmes made for television. Thus Extraordinary People on the British television channel Five or BodyShock show the life of severely disabled or deformed people, and can be seen as the modern equivalent of the circus freak shows.[13][14] However in order to make the shows respectable, the subjects are usually portrayed as heroic and attention is given to their family and friends and the way they help them overcome their disabilities. On The Guardian, Chris Shaw however comments that "one man's freak show is another man's portrayal of heroic triumph over medical adversity" and carries on with "call me prejudiced but I suspect your typical twentysomething watched this show with their jaw on the floor rather than a tear in their eye".[15]