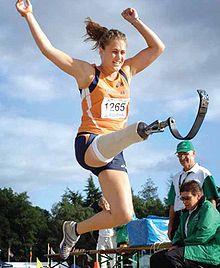 Annette Roozen, a Dutch amputee, competes in the long jump.

Organized sport for athletes with a disability is generally divided into three broad disability groups: the deaf, people with physical disabilities, and people with intellectual disabilities. Each group has a distinct history, organization, competition program, and approach to sport.

Formal international competition in deaf sport began with the 1924 Paris Silent Games, organized by the Comité International des Sports des Sourds, CISS (The International Committee of Sports for the Deaf). These games evolved into the modern Deaflympics, governed by the CISS. The CISS maintains separate games for deaf athletes based on their numbers, their special communication needs on the sports field, and the social interaction that is a vital part of sports.[1]

Organized sport for persons with physical disabilities developed out of rehabilitation programs. Following the Second World War, in response to the needs of large numbers injured ex-service members and civilians, sport was introduced as a key part of rehabilitation. Sport for rehabilitation grew into recreational sport and then into competitive sport. The pioneer of this approach was Sir Ludwig Guttmann of the Stoke Mandeville Hospital in England. In 1948, while the Olympic Games were being held in London, he organized a sports competition for wheelchair athletes at Stoke Mandeville. This was the origin of the Stoke Mandeville Games, which evolved into the modern Paralympic Games. Currently, Paralympic sport is governed by the International Paralympic Committee, in conjunction with a wide range of other international sport organizations.[2]

In 2006, the Extremity Games was formed for people with limb loss or limb difference to compete in extreme sports. The College Park Industries, a manufacturer of prosthetic feet, organized this event to give amputee athletes a venue to compete in this increasingly popular sports genre also referred to as action sports. This annual event held in the summer in Orlando, FL includes competitions in skateboarding, wakeboarding, rock climbing, mountain biking, surfing, moto-x and kayaking. Various organizations, such as Paradox Sports, have arisen to help empower and inspire disabled people through equipping and welcoming them into the extreme sports community.

In 2007, a group of San Diego, California-based athletes, coaches, volunteers, and parents split from Special Olympics Southern California to gain local control over disabled athletics programs.[5] This group -- SPORTS for Exceptional Athletes (S4EA) -- serves people with developmental disabilities within the age range of 5 years old through adults. By combining people with and without disabilities, S4EA hopes that participating athletes will interact and form lasting bonds of friendship through shared sports and recreational activities in S4EA's served communities. Although the organization's focus is primarily San Diego County, S4EA has grown from this base to satellite programs in Ventura and Temecula, California.

Since 1988, the International Olympic Committee have chosen to validate Disabled Sports (physical disabilities) and incorporate it as a part of the Games: the staging of the Paralympic Games immediately follows the Olympic Games. This scheduling helps to foster greater interest in disabled sports. As an investigation on the Swiss wheelchair website has shown, more and more International Sports Federations list disabled athletes as any other sportsmen or sportswomen. 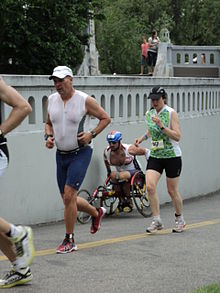 A wheelchair athlete competes in the running segment of the Ironman 70.3 triathlon held in Boise, Idaho in June 2011.

There are a wide range of sports that have been adapted to be played by people with varying types of disability, as well as several that are unique to disabled athletes. Within each movement, different sports are practised at different levels; for example, not all sports in the Paralympic movement are part of the Paralympic Games. In addition, many sports are practiced by persons with a disability outside the formal sports movements.

Beginning in the late 1980s and early 1990s, work began within several countries and organizations to include athletes with disabilities in the able-bodied sport system. This included adding events for athletes with disabilities to major games such as the Olympic Games and the Commonwealth Games, and integration of these athletes into able-bodied sports organizations.[6] Since 1984, the Olympics have included exhibition events for Paralympic athletes. However, integration of full medal events has not taken place, and the status of athletes with a disability in the Olympic movement remains controversial.[7] Within the Commonwealth Games, athletes with a disability were first included in exhibition events in 1994,[8] and at the 2002 Manchester Commonwealth Games they were included as full members of their national teams, making these the first fully inclusive international multi-sport games.[citation needed] This policy has continued with the 2006 Melbourne Commonwealth Games, where Canadian Chantal Petitclerc became the first athlete with a disability to carry her country's flag in the Opening Ceremonies of an integrated games.[citation needed]