Human zoos (also called ethnological expositions or Negro Villages) were 19th- and 20th-century public exhibits of humans, usually in a so-called natural or primitive state. The displays often emphasized the cultural differences between Europeans of Western civilisation and non-European peoples. Ethnographic zoos were often predicated on unilinealism, scientific racism and social Darwinism. A number of them placed indigenous people (particularly Africans) in a continuum somewhere between the great apes and humans of European descent. Ethnographic zoos have since been criticized as highly degrading and racist. 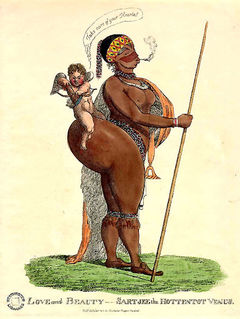 A caricature of Saartjie Baartman, called the Hottentot Venus. Born to a Khoisan family, she was displayed in London in the early 19th century.

In the Western Hemisphere, one of the earliest-known zoos, that of Moctezuma in Mexico, consisted not only of a vast collection of animals, but also exhibited unusual humans, for example, dwarves, albinos and hunchbacks. [1]

During the Renaissance, the Medicis developed a large menagerie in the Vatican. In the 16th century, Cardinal Hippolytus Medici had a collection of people of different races as well as exotic animals. He is reported as having a troup of so-called Barbarians, speaking over twenty languages and there were also Moors, Tartars, Indians, Turks and Africans. [2]

One of the first modern public human exhibitions was P.T. Barnum's exhibition of Joice Heth on February 25, 1835[3] and, subsequently, the Siamese twins Chang and Eng Bunker. These exhibitions were common in freak shows. However, the notion of the human curiosity has a history at least as long as colonialism. For instance, Columbus brought indigenous Americans from his voyages in the New World to the Spanish court in 1493.[4] Another famous example was that of Saartjie Baartman of the Namaqua, often referred to as the Hottentot Venus, who was displayed in London and France until her death in 1815. During the 1850s, Maximo and Bartola, two microcephalic children from Mexico, were exhibited in the US and Europe under the names Aztec Children and Aztec Lilliputians.[5] However, human zoos would become common only in the 1870s in the midst of the New Imperialism period.

Exhibitions of exotic populations became popular in various countries in the 1870s. Human zoos could be found in Paris, Hamburg, Antwerp, Barcelona, London, Milan, New York, and Warsaw with 200,000 to 300,000 visitors attending each exhibition. In Germany, Carl Hagenbeck, a merchant in wild animals and future entrepreneur of many European zoos, decided in 1874 to exhibit Samoan and Sami people as "purely natural" populations. In 1876, he sent a collaborator to the Egyptian Sudan to bring back some wild beasts and Nubians. The Nubian exhibit was very successful in Europe and toured Paris, London, and Berlin. He also dispatched an agent to Labrador to secure a number of Esquimaux (Eskimo) (Inuit) from the settlement of Hopedale; these Inuit were exhibited in his Hamburg Tierpark.

Both the 1878 and the 1889 Parisian World's Fair presented a Negro Village (village nègre). Visited by 28 million people, the 1889 World's Fair displayed 400 indigenous people as the major attraction. The 1900 World's Fair presented the famous diorama living in Madagascar, while the Colonial Exhibitions in Marseilles (1906 and 1922) and in Paris (1907 and 1931) also displayed humans in cages, often nude or semi-nude.[7] The 1931 exhibition in Paris was so successful that 34 million people attended it in six months, while a smaller counter-exhibition entitled The Truth on the Colonies, organized by the Communist Party, attracted very few visitors—in the first room, it recalled Albert Londres and André Gide's critics of forced labour in the colonies. Nomadic Senegalese Villages were also presented.

Native people of Suriname were displayed in the International Colonial and Export Exhibition in Amsterdam, held behind the Rijksmuseum in 1883.

Similar human displays had been seen at the 1901 Pan-American Exposition [8] and at the 1893 World's Columbian Exposition, where Little Egypt performed bellydance, and where the photographers Charles Dudley Arnold and Harlow Higginbotham took depreciative photos, presenting indigenous people as catalogue of "types," along with sarcastic legends.[9]

To increase the number of visitors, the Cincinnati Zoo invited one hundred Sioux Native Americans to establish a village at the site in 1896. The Sioux lived at the zoo for three months.[10] 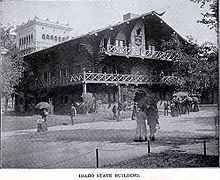 In 1904, Apaches, Igorots (from the Philippines) and the famous Ota Benga were displayed, dubbed as "primitive", at the Saint Louis World Fair. The USA had just acquired, following the Spanish-American War, new territories such as Guam, the Philippines, and Puerto Rico, allowing them to "display" some of the native inhabitants.[11] According to the Rev. Sequoyah Ade,

To further illustrate the indignities heaped upon the Philippine people following their eventual loss to the Americans, the United States made the Philippine campaign the centrepoint of the 1904 World's Fair held that year in St. Louis, MI [sic]. In what was enthusiastically termed a "parade of evolutionary progress," visitors could inspect the "primitives" that represented the counterbalance to "Civilisation" justifying Kipling's poem "The White Man's Burden". Pygmies from New Guinea and Africa, who were later displayed in the Primate section of the Bronx Zoo, were paraded next to American Indians such as Apache warrior Geronimo, who sold his autograph. But the main draw was the Philippine exhibit complete with full size replicas of Indigenous living quarters erected to exhibit the inherent backwardness of the Philippine people. The purpose was to highlight both the "civilising" influence of American rule and the economic potential of the island chains' natural resources on the heels of the Philippine-America War. It was, reportedly, the largest specific Aboriginal exhibit displayed in the exposition. As one pleased visitor commented, the human zoo exhibit displayed "the race narrative of odd peoples who mark time while the world advances, and of savages made, by American methods, into civilized workers."[12]

In 1906, socialite and amateur anthropologist Madison Grant, head of the New York Zoological Society, had Congolese pygmy Ota Benga put on display at the Bronx Zoo in New York City alongside apes and other animals. At the behest of Grant, a prominent eugenicist, the zoo director William Hornaday placed Ota Benga displayed in a cage with the chimpanzees, then with an orangutan named Dohong, and a parrot, and labeled him The Missing Link, suggesting that in evolutionary terms Africans like Ota Benga were closer to apes than were Europeans. It triggered protests from the city's clergymen, but the public reportedly flocked to see it.[6][13]

Benga shot targets with a bow and arrow, wove twine, and wrestled with an orangutan. Although, according to the New York Times, "few expressed audible objection to the sight of a human being in a cage with monkeys as companions,” controversy erupted as black clergymen in the city took great offense. “Our race, we think, is depressed enough, without exhibiting one of us with the apes,” said the Reverend James H. Gordon, superintendent of the Howard Colored Orphan Asylum in Brooklyn. “We think we are worthy of being considered human beings, with souls.”[14]

New York Mayor George B. McClellan, Jr. refused to meet with the clergymen, drawing the praise of Dr. Hornaday, who wrote to him, “When the history of the Zoological Park is written, this incident will form its most amusing passage.”[14]

As the controversy continued, Hornaday remained unapologetic, insisting that his only intention was to put on an ethnological exhibit. In another letter, he said that he and Madison Grant, the secretary of the New York Zoological Society, who ten years later would publish the racist tract The Passing of the Great Race, considered it “imperative that the society should not even seem to be dictated to” by the black clergymen.[14]

Still, Hornaday decided to close the exhibit after just two days, and on Monday, September 8, Benga could be found walking the zoo grounds, often followed by a crowd “howling, jeering and yelling."[14]

The concept of the human zoo has not completely disappeared. A Congolese village was displayed at the Brussels 1958 World's Fair.[15] In April 1994, an example of an Ivory Coast village was presented at African safari of Port-Saint-Père, near Nantes, in France, later called Planète Sauvage.[16]

An African village was opened in Augsburg's zoo in Germany in July 2005.[17] In August 2005, London Zoo also displayed humans wearing fig leaves (though in this case, the participants volunteered).[18] In 2007, Adelaide Zoo ran a Human Zoo exhibit which consisted of a group of people who, as part of a study exercise, had applied to be housed in the former ape enclosure by day, but then returned home by night. The inhabitants took part in several exercises, much to the amusement of onlookers, who were asked for donations towards a new ape enclosure. In 2007, Pygmy performers at the Festival of Pan-African Music were housed at a zoo in Brazzaville, Congo.[19]