The disease has gone by several names, including Hand-Schüller-Christian disease, Abt-Letterer-Siwe disease, and histiocytosis X, until it was renamed in 1985 by the Histiocyte Society.[1]

Unifocal
Unifocal LCH, also called eosinophilic granuloma (an older term which is now known to be a misnomer), is a slowly-progressing disease characterized by an expanding proliferation of Langerhans cells in various bones. It is a monostotic or polystotic disease with no extraskeletal involvement. This differentiates eosinofilic granuloma from other forms of langerhans cell histiocytosis (Letterer-Siwe or Hand-Schüller-Christian variant.[4]
Multifocal unisystem
Seen mostly in children, multifocal unisystem LCH is characterized by fever, bone lesions and diffuse eruptions, usually on the scalp and in the ear canals. 50% of cases involve the pituitary stalk, leading to diabetes insipidus. The triad of diabetes insipidus, exopthalmos, and lytic bone lesions is known as the Hand-Schüller-Christian triad.
Multifocal multisystem
Multifocal multisystem LCH, also called Letterer-Siwe disease, is a rapidly-progressing disease in which Langerhans cells proliferate in many tissues. It is mostly seen in children under age 2, and the prognosis is poor: even with aggressive chemotherapy, the 5-year survival is only 50%.[5]

Pulmonary Langerhans cell histiocytosis (PLCH) is a unique form of LCH in that it occurs almost exclusively in cigarette smokers. It is now considered a form of smoking-related interstitial lung disease. Some patients recover completely after they stop smoking, but others develop long-term complications such as pulmonary fibrosis and pulmonary hypertension.

LCH usually affects children between 1 and 15 years old, with a peak incidence between 5 and 10 years of age. Among children under the age of 10, yearly incidence is thought to be 1 in 200,000;[6] and in adults even rarer, in about 1 in 560,000.[7] It has been reported in elderly but is vanishingly rare.[8] It is most prevalent in Caucasians, and affects males twice as often as females.[citation needed]

LCH is usually a sporadic and non-hereditary condition but familial clustering has been noted in limited number of cases. Hashimoto-Pritzker disease is a congenital self-healing variant of Hand-Schüller-Christian disease.[9] 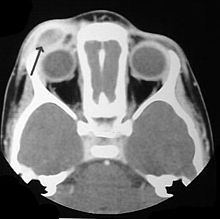 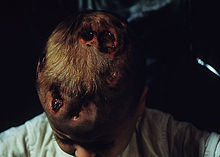 A patient with Hand–Schüller–Christian disease which is a subtype of Langerhans cell histiocytosis.

] infiltrate in the mid and lower zone of lung, with sparing of the Costophrenic angle or honeycomb appearance in older lesions. MRI and CT may show infiltration in sella turcica. Assessment of endocrine function and bonemarrow biopsy are also performed when indicated.

Treatment is guided by extent of disease. Solitary bone lesion may be amenable through excision or limited radiation. However systemic diseases often require chemotherapy. Use of systemic steroid is common, singly or adjunct to chemotherapy. Local steroid cream is applied to skin lesions. Endocrine deficiency often require lifelong supplement e.g. desmopressin for diabetes insipidus which can be applied as nasal drop. Chemotherapeutic agents such as alkylating agents, antimetabolites, vinca alkaloids either singly or in combination can lead to complete remission in diffuse disease.

Excellent for single foci disease. With multi-focal disease 60% have a chronic course, 30% achieve remission and mortality is up to 10%.[11]