Vasculitis (plural: vasculitides)[1] refers to a heterogeneous group of disorders that are characterized by inflammatory destruction of blood vessels.[2] Both arteries and veins are affected. Lymphangitis is sometimes considered a type of vasculitis.[3] Vasculitis is primarily due to leukocyte migration and resultant damage.

Although both occur in vasculitis, inflammation of veins (phlebitis) or arteries (arteritis) on their own are separate entities.

There are many ways to classify vasculitis.

Some disorders have vasculitis as their main feature. The major types are given in the table below:

Takayasu's arteritis, polyarteritis nodosa and giant cell arteritis are sometimes classified as vasculitis as well, but rather belong to arteritis since they mainly involve arteries.

Furthermore, there are many conditions that have vasculitis as an accompanying or atypical symptom, including: 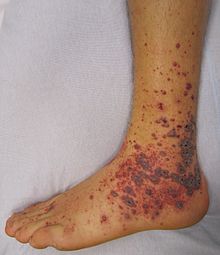 Petechia and purpura on the low limb due to medication induced vasculitis.

Treatments are generally directed toward stopping the inflammation and suppressing the immune system. Typically, cortisone-related medications, such as prednisone, are used. Additionally, other immune suppression drugs, such as cyclophosphamide and others, are considered. In case of an infection, antimicrobial agents including cephalexin may be prescribed. Affected organs (such as the heart or lungs) may require specific medical treatment intended to improve their function during the active phase of the disease.