Abscess
This article is about the medical condition. For the death metal band, see Abscess (band).

An abscess (Latin: abscessus) is a collection of pus (dead neutrophils) that has accumulated in a cavity formed by the tissue in which the pus resides due to an infectious process (usually caused by bacteria or parasites) or other foreign materials (e.g., splinters, bullet wounds, or injecting needles). It is a defensive reaction of the tissue to prevent the spread of infectious materials to other parts of the body. One example of an abscess is a BCG-oma, which is caused because of incorrect administration of the BCG vaccine.

The organisms or foreign materials kill the local cells, resulting in the release of cytokines. The cytokines trigger an inflammatory response, which draws large numbers of white blood cells to the area and increases the regional blood flow.

The final structure of the abscess is an abscess wall, or capsule, that is formed by the adjacent healthy cells in an attempt to keep the pus from infecting neighboring structures. However, such encapsulation tends to prevent immune cells from attacking bacteria in the pus, or from reaching the causative organism or foreign object.

Abscesses must be differentiated from empyemas, which are accumulations of pus in a preexisting rather than a newly formed anatomical cavity.

The cardinal symptoms and signs of any kind of inflammatory process are redness, heat, swelling, pain and loss of function. Abscesses may occur in any kind of solid tissue but most frequently on skin surface (where they may be superficial pustules (boils) or deep skin abscesses), in the lungs, brain, teeth, kidneys and tonsils. Major complications are spreading of the abscess material to adjacent or remote tissues and extensive regional tissue death (gangrene). Abscesses in most parts of the body rarely heal themselves, so prompt medical attention is indicated at the first suspicion of an abscess. An abscess could potentially be fatal (although this is rare) if it compresses vital structures such as the trachea in the context of a deep neck abscess.[citation needed] 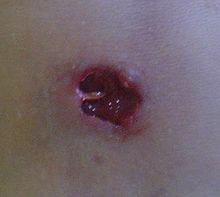 Surgical drainage of the abscess (e.g., lancing) is usually indicated once the abscess has developed from a harder serous inflammation to a softer pus stage. This is expressed in the Latin medical aphorism: Ubi pus, ibi evacua.

In critical areas where surgery presents a high risk, it may be delayed or used as a last resort. The drainage of a lung abscess may be performed by positioning the patient in a way that enables the contents to be discharged via the respiratory tract. Warm compresses and elevation of the limb may be beneficial for a skin abscess.

In North America, after drainage, an abscess cavity is often packed. However, there is no evidence to support this practice and it may in fact delay healing.[3] To try to answer this question more definitely, a randomized double-blind study was started in September 2008 and was completed in March 2010.[4] Interim analysis of data from this study suggests that "wound packing may significantly increase the failure rates." [5] A small pilot study has found no benefit from packing of simple cutaneous abscesses.[6]

In anorectal abscesses, primary closure healed faster, but 25% of abscesses healed by secondary intention and recurrence was higher.[10]

As Staphylococcus aureus bacteria is a common cause, an anti-staphylococcus antibiotic such as flucloxacillin or dicloxacillin is used. With the emergence of community-acquired methicillin-resistant staphylococcus aureus MRSA, these traditional antibiotics may be ineffective; alternative antibiotics effective against community-acquired MRSA often include clindamycin, trimethoprim-sulfamethoxazole, and doxycycline. These antibiotics may also be prescribed to patients with a documented allergy to penicillin. (If the condition is thought to be cellulitis rather than abscess, consideration should be given to possibility of strep species as cause that are still sensitive to traditional anti-staphylococcus agents such as dicloxacillin or cephalexin in patients able to tolerate penicillin). It is important to note that antibiotic therapy alone without surgical drainage of the abscess is seldom effective due to antibiotics often being unable to get into the abscess and their ineffectiveness at low pH levels. Whilst most medical texts advocate surgical incision some medical doctors will treat small abscesses conservatively with antibiotics.

Recurrent abscesses are often caused by community-acquired MRSA. While resistant to most beta lactam antibiotics commonly used for skin infections, it remains sensitive to alternative antibiotics, e.g., clindamycin (Cleocin), trimethoprim-sulfamethoxazole (Bactrim), and doxycycline (unlike hospital-acquired MRSA that may only be sensitive to vancomycin IV).

To prevent recurrent infections due to Staphylococcus, consider the following measures:

Historically abscesses as well as boils and many other collections of pus have been treated via application of magnesium sulfate (Epsom salt) paste. This works by drawing the infected pus to the surface of the skin before rupturing and leaking out. After this the body will usually repair the old infected cavity. Magnesium sulfate is therefore best applied at night with a sterile dressing covering it, the rupture itself is not painful but the drawing up may be uncomfortable. Magnesium sulfate paste is not necessarily an effective or accepted medical treatment.[citation needed]

Perianal abscesses can be seen in patients with for example inflammatory bowel disease (such as Crohn's disease) or diabetes. Often the abscess will start as an internal wound caused by ulceration, hard stool or penetrative objects with insufficient lubrication. This wound typically becomes infected as a result of the normal presence of feces in the rectal area, and then develops into an abscess. This often presents itself as a lump of tissue near the anus which grows larger and more painful with time. Like other abscesses, perianal abscesses may require prompt medical treatment, such as an incision and debridement or lancing.