Lichen planus is a chronic mucocutaneous disease that affects the skin, tongue, and oral mucosa. The disease presents itself in the form of papules,[1] lesions, or rashes. Lichen planus does not involve lichens, the fungus/algae symbionts that often grow on tree trunks; the name refers to the dry and undulating, "lichen-like" appearance of affected skin. It is sometimes associated with certain medications and diseases, but is basically of unknown cause.

Lichen planus may be divided into the following types:[2]:466 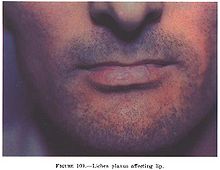 The typical rash of lichen planus is well-described by the "5 Ps": well-defined pruritic, planar, purple, polygonal papules. The commonly affected sites are near the wrist and the ankle. The rash tends to heal with prominent blue-black or brownish discoloration that persists for a long time. Besides the typical lesions, many morphological varieties of the rash may occur. The presence of cutaneous lesions is not constant and may wax and wane over time. Oral lesions tend to last far longer than cutaneous lichen planus lesions.

Oral lichen planus (OLP) may present in one of three forms.

The microscopic appearance of lichen planus is pathognomonic for the condition

Lichen planus may also affect the genital mucosa – vulvovaginal-gingival lichen planus. It can resemble other skin conditions such as atopic dermatitis and psoriasis.

Rarely, lichen planus shows esophageal involvement, where it can present with erosive esophagitis and stricturing. It has also been hypothesized that it is a precursor to squamous cell carcinoma of the esophagus.[citation needed]

Clinical experience suggests that Lichen planus of the skin alone is easier to treat as compared to one which is associated with oral and genital lesions.

The cause of lichen planus is not known. It is not contagious[4] and does not involve any known pathogen. Some lichen planus-type rashes (known as lichenoid reactions) occur as allergic reactions to medications for high blood pressure, heart disease and arthritis, in such cases termed drug-induced lichenoid reactions. These lichenoid reactions are referred to as lichenoid mucositis (of the mucosa) or dermatitis (of the skin). Lichen planus has been reported as a complication of chronic hepatitis C virus infection and can be a sign of chronic graft-versus-host disease of the skin (Lichenoid reaction of graft-versus-host disease). [5]. It has been suggested that true lichen planus may respond to stress, where lesions may present on the mucosa or skin during times of stress in those with the disease. Lichen planus affects women more than men (at a ratio of 3:2), and occurs most often in middle-aged adults. The involvement of the mucous membranes is seen frequently and usually is asymptomatic, but occasionally, LP can be complicated by extensive painful erosions.[6] Lichen planus in children is rare. In unpublished clinical observation, lichen planus appears to be associated with hypothyroidism in 3 young females.[citation needed]

Reactions to amalgam fillings may contribute to the oral lesions very similar to lichen planus, and a systematic review found that many of the lesions resolved after the fillings were replaced with another material.[7]

Lichen planus can be part of Grinspan's syndrome.

Care of OLP is within the scope of oral medicine speciality. Currently there is no cure for lichen planus but there are certain types of medicines used to reduce the effects of the inflammation. Lichen planus may go into a dormant state after treatment. There are also reports that lichen planus can flare up years after it is considered cured.