A lipoma is a benign tumor composed of adipose tissue. It is the most common form of soft tissue tumor.[1] Lipomas are soft to the touch, usually movable, and are generally painless. Many lipomas are small (under one centimeter diameter) but can enlarge to sizes greater than six centimeters. Lipomas are commonly found in adults from 40 to 60 years of age, but can also be found in children. Some sources claim that malignant transformation can occur,[2] while others say that this has yet to be convincingly documented.[3] 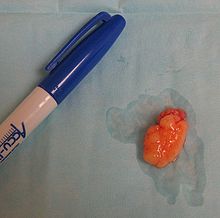 Approximately one percent of the general population has a lipoma.[3] These tumors can occur at any age, but are most common in middle age, often appearing in people from 40 to 60 years old.[10] Cutaneous lipomas are rare in children, but these tumors can occur as part of the inherited disease Bannayan-Zonana syndrome.[11][12]

The tendency to develop a lipoma is not necessarily hereditary although hereditary conditions, such as familial multiple lipomatosis, may include lipoma development.[13][14] Genetic studies in mice have shown a correlation between the HMG I-C gene (previously identified as a gene related to obesity) and lipoma development. These studies support prior epidemiologic data in humans showing a correlation between HMG I-C and mesenchymal tumors.[15]

Cases have been reported where minor injuries are alleged to have triggered the growth of a lipoma, called "post-traumatic lipomas."[16] However, the link between trauma and the development of lipomas is controversial.[17]

Usually, treatment of a lipoma is not necessary, unless the tumor becomes painful or restricts movement. They are usually removed for cosmetic reasons, if they grow very large, or for histopathology to check that they are not a more dangerous type of tumor such as a liposarcoma.[3] This last point can be important as the actual identity of a "bump" is not known until after it is removed and professionally examined.

Lipomas are normally removed by simple excision.[10] The removal can often be done under local anaesthetic, and take less than 30 minutes.[18] This cures the majority of cases, with about 1-2% of lipomas recurring after excision.[19] Liposuction is another option if the lipoma is soft and has a small connective tissue component. Liposuction typically results in less scarring; however, with large lipomas it may fail to remove the entire tumor, which can lead to re-growth.[20]

There are new methods being developed that are supposed to remove the lipomas without scarring. One of them is removal by the use of injection of compounds that trigger lipolysis, such as steroids or phosphatidylcholine.[10][21]

Lipomas are rarely life-threatening and the common subcutaneous lipomas are not a serious condition. Lipomas growing in internal organs can be more dangerous, for example lipomas in the gastrointestinal tract can cause bleeding, ulceration and painful obstructions.[22][23] Malignant transformation of lipomas into liposarcomas is very rare and most liposarcomas are not produced from pre-existing benign lesions,[19] although a few cases of malignant transformation have been described for bone and kidney lipomas.[24][25] It is possible these few reported cases were well-differentiated liposarcomas in which the subtle malignant characteristics were missed when the tumour was first examined.[26] Deep lipomas have a greater tendency to recur than superficial lipomas, because complete surgical removal of deep lipomas is not always possible.[26][27]

Lipomas occur in many animals, but are most common in older dogs, particularly older Labrador Retrievers, Doberman Pinschers and Miniature Schnauzers.[28] Overweight female dogs are especially prone to developing these tumors and most older or overweight dogs have at least one lipoma.[29][30] In dogs, lipomas usually occur in the trunk or upper limbs.[28] Lipomas are also found less commonly in cattle and horses, but rarely in cats and pigs.[30][31]

Lipomatosis is a hereditary condition where multiple lipomas are present on the body.

Benign symmetric lipomatosis (Madelung disease) is another condition involving lipomatosis. It nearly always appears in middle-aged males after many years of alcoholism, although non-alcoholics and females can also be affected.[citation needed]