Impetigo /ɪmpɨˈtaɪɡoʊ/ is a highly contagious bacterial skin infection most common among pre-school children.[1] People who play close contact sports such as rugby, American football and wrestling are also susceptible, regardless of age. Impetigo is not as common in adults. The name derives from the Latin impetere ("assail"). It is also known as school sores.[2] 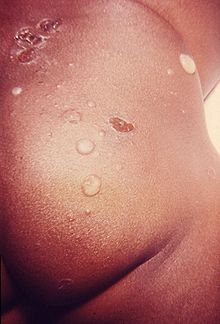 Bullous impetigo primarily affects infants and children younger than 2 years. It causes painless, fluid-filled blisters — usually on the trunk, arms and legs. The skin around the blister is usually red and itchy but not sore. The blisters, which break and scab over with a yellow-colored crust, may be large or small, and may last longer than sores from other types of impetigo. 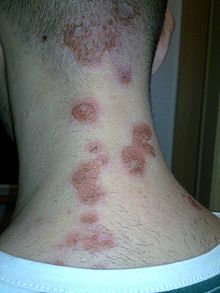 Ecthyma is a more serious form of impetigo in which the infection penetrates deeper into the skin's second layer, the dermis. Signs and symptoms include:

The infection is spread by direct contact with lesions or with nasal carriers. The incubation period is 1–3 days. Dried streptococci in the air are not infectious to intact skin. Scratching may spread the lesions.

Impetigo generally appears as honey-colored scabs formed from dried serum, and is often found on the arms, legs, or face.[3]

Good hygiene practices can help prevent impetigo from spreading. Those who are infected should use soap and water to clean their skin and take baths or showers regularly. Non-infected members of the household should pay special attention to areas of the skin that have been injured, such as cuts, scrapes, insect bites, areas of eczema, and rashes. These areas should be kept clean and covered to prevent infection. In addition, anyone with impetigo should cover the impetigo sores with gauze and tape. All members of the household should wash their hands thoroughly with soap regularly. It is also a good idea for everyone to keep their fingernails cut short to make hand washing more effective. Contact with the infected person and his or her belongings should be avoided, and the infected person should use separate towels for bathing and hand washing. If necessary, paper towels can be used in place of cloth towels for hand drying. The infected person's bed linens, towels, and clothing should be separated from those of other family members, as well. When a person has impetigo, it is common for them to get it a second time in the space of 6–9 months. This usually occurs in people aged 12–16.

For generations, the disease was treated with an application of the antiseptic gentian violet.[5] Today, topical or oral antibiotics are usually prescribed. Treatment may involve washing with soap and water and letting the impetigo dry in the air. Mild cases may be treated with bactericidal ointment, such as fusidic acid, mupirocin, chloramphenicol or neosporin, which in some countries may be available over-the-counter. More severe cases require oral antibiotics, such as dicloxacillin, flucloxacillin or erythromycin. Alternatively amoxicillin combined with clavulanate potassium, cephalosporins (1st generation) and many others may also be used as an antibiotic treatment.