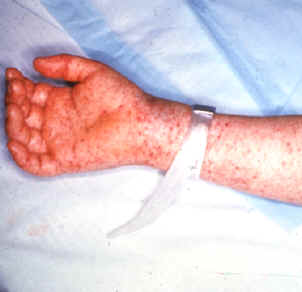 Rocky Mountain spotted fever is the most severe and most frequently reported l illness in the . It has been diagnosed throughout the . Some synonyms for Rocky Mountain spotted fever in other countries include “ ,” “ ” (), “ ” or “"febre maculosa"” (), and “"fiebre manchada"” (). It should not be confused with the viral tick-borne infection, . The disease is caused by "", a species of that is spread to humans by ixodid (hard) . Initial signs and symptoms of the disease include sudden onset of , , and muscle pain, followed by development of rash. The disease can be difficult to diagnose in the early stages, and without prompt and appropriate treatment it can be fatal.

The name “Rocky Mountain spotted fever” is somewhat of a . Beginning in the 1930s, it became clear that this disease occurred in many areas of the United States other than the Rocky Mountain region. It is now recognized that this disease is broadly distributed throughout the continental United States, and occurs as far north as and as far south as , , and parts of . Between 1981 and 1996, this disease was reported from every U.S. state except Hawaii, , , and .

Rocky Mountain spotted fever, like all rickettsial infections, is classified as a . Zoonoses are diseases of animals that can be transmitted to humans. Many zoonotic diseases require a vector (e.g., a mosquito, tick, or mite) in order to be transmitted from the animal host to the human host. In the case of Rocky Mountain spotted fever, ticks are the natural hosts, serving as both reservoirs and vectors of "R. rickettsii". Ticks transmit the organism to s primarily by their bite. Less commonly, infections may occur following exposure to crushed tick tissues, fluids, or tick feces.A female tick can transmit "R. rickettsii" to her eggs in a process called . Ticks can also become infected with "R. rickettsii" while feeding on blood from the host in either the larval or nymphal stage. After the tick develops into the next stage, the "R. rickettsii" may be transmitted to the second host during the feeding process. Furthermore, male ticks may transfer "R. rickettsii" to female ticks through body fluids or during the mating process. These types of transmission represent how generations or life stages of infected ticks are maintained. Once infected, the tick can carry the pathogen for life.

Rickettsiae are transmitted to a host through saliva while a tick is feeding. It usually takes several hours of attachment and feeding before the rickettsiae are transmitted to the host. The risk of exposure to a tick carrying "R. rickettsii" is low. In general, about 1%-3% of the tick population carries "R. rickettsii", even in areas where the majority of human cases are reported.

There are 2 major vectors of "R. rickettsii" in the United States, the and the . American dog ticks ("Dermacentor variabilis") are widely distributed east of the Rocky Mountains and also occur in limited areas on the Pacific Coast. Dogs and medium-sized mammals are the preferred hosts of adult "D. variabilis", although it feeds readily on other large mammals, including humans. This tick is the most commonly identified species responsible for transmitting "R. rickettsii" to humans. Rocky Mountain wood ticks ("Dermacentor andersoni") are found in the Rocky Mountain states and in southwestern Canada. The life cycle of this tick may require up to 2 to 3 years for completion. Adult ticks feed primarily on large mammals. Larvae and nymphs feed on small rodents.

Other tick species have been shown to be naturally infected with "R. rickettsii" or serve as experimental vectors in the laboratory. However, these species are likely to play only a minor role in the ecology of "R. rickettsii".

Rocky Mountain spotted fever can be very difficult to diagnose in its early stages, even among experienced physicians who are familiar with the disease.

Patients infected with "R. rickettsii" generally visit a physician in the first week of their illness, following an incubation period of about one to two weeks after a tick bite. The early clinical presentation of Rocky Mountain spotted fever is nonspecific and may resemble a variety of other infectious and non-infectious diseases.

Initial symptoms may include:

Later signs and symptoms include:

The classic triad of findings for this disease are fever, rash, and history of tick bite. However, this combination is often not identified when the patient initially presents for care. The rash has a ,or "inward" pattern of spread, meaning it begins at the extremities and courses towards the trunk.

The rash first appears 2-5 days after the onset of fever and is often not present or may be very subtle when the patient is initially seen by a physician. Younger patients usually develop the rash earlier than older patients. Most often it begins as small, flat, pink, non-itchy spots () on the wrists, forearms, and ankles. These spots turn pale when pressure is applied and eventually become raised on the skin. The characteristic red, spotted (petechial) rash of Rocky Mountain spotted fever is usually not seen until the sixth day or later after onset of symptoms, but this type of rash occurs in only 35% to 60% of patients with Rocky Mountain spotted fever. The rash involves the palms or soles in as many as 50% to 80% of patients; however, this distribution may not occur until later in the course of the disease. As many as 10% to 15% of patients may never develop a rash.

Abnormal laboratory findings seen in patients with Rocky Mountain spotted fever may include , , or elevated levels.

Rocky Mountain spotted fever can be a very severe illness and patients often require hospitalization. Because "R. rickettsii" infects the cells lining s throughout the body, severe manifestations of this disease may involve the , , , or . Host factors associated with severe or fatal Rocky Mountain spotted fever include advanced age, male sex, African-American race, chronic alcohol abuse, and (G6PD) deficiency. Deficiency of G6PD is a sex-linked genetic condition affecting approximately 12% of the U.S. African-American male population; deficiency of this enzyme is associated with a high proportion of severe cases of Rocky Mountain spotted fever. This is a rare clinical course that is often fatal within 5 days of onset of illness.

Appropriate antibiotic treatment is initiated "immediately" when there is a suspicion of Rocky Mountain spotted fever on the basis of clinical and epidemiological findings. Treatment should "not" be delayed until laboratory confirmation is obtained. In fact, failure to respond to a tetracycline antibiotic argues against a diagnosis of Rocky Mountain spotted fever. Severely ill patients may require longer periods before their fever resolves, especially if they have experienced damage to multiple organ systems. Preventive therapy in non-ill patients who have had recent tick bites is not recommended and may, in fact, only delay the onset of disease.

(For adults, 100 mg every 12 hours. For children under 45 kg [100 lb] , 4 mg/kg body weight per day in two divided doses) is the drug of choice for patients with Rocky Mountain spotted fever. Therapy is continued for at least 3 days after fever subsides and until there is unequivocal evidence of clinical improvement, generally for a minimum total course of 5 to 10 days. Severe or complicated disease may require longer treatment courses. Doxycycline is also the preferred drug for patients with , another tick-transmitted infection with signs and symptoms that may resemble Rocky Mountain spotted fever.

is an alternative drug that can be used to treat Rocky Mountain spotted fever; however, this drug may be associated with a wide range of side effects and may require careful monitoring of blood levels (as it can cause ).

Rocky Mountain spotted fever was first recognized in 1896 in the Snake River Valley of and was originally called “black measles” because of the characteristic rash. It was a dreaded and frequently fatal disease that affected hundreds of people in this area. By the early 1900s, the recognized geographic distribution of this disease grew to encompass parts of the United States as far north as Washington and and as far south as , , and .

was the first to establish the identity of the infectious organism that causes this disease. He and others characterized the basic epidemiological features of the disease, including the role of tick vectors. Their studies found that Rocky Mountain spotted fever is caused by "Rickettsia rickettsii". This species is maintained in nature by a complex cycle involving ticks and mammals; humans are considered to be accidental hosts and are not involved in the natural transmission cycle of this pathogen. Tragically—and ironically—Dr. Ricketts died of typhus (another rickettsial disease) in in 1910, shortly after completing his remarkable studies on Rocky Mountain spotted fever.