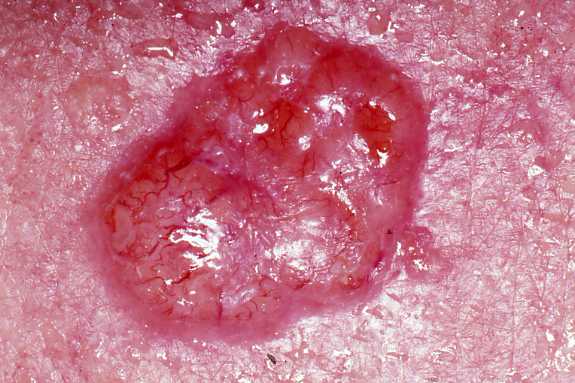 Caption =
DiseasesDB = 1264
ICD10 =
ICD9 = ICD9|173
ICDO = 8090/3-8093/3
OMIM = 605462
MedlinePlus =
eMedicineSubj = med
eMedicineTopic = 214
MeshID = D002280
Basal cell carcinoma is a type of skin cancer. It is a malignant epithelial cell tumor that begins as a papule (a small, circumscribed, solid elevation of the skin) and enlarges peripherally, developing into a crater that erodes, crusts and bleeds. Metastasis is rare, but local invasion destroys underlying and adjacent tissue. In 90 percent of all cases, the lesion is seen between the hairline and the upper lip. This type cancer is the most common and least lethal form of all cancers. It can be destructive and disfiguring.The risk of skin cancer is related to the amount of sun exposure and pigmentation in the skin. The longer the exposure to the sun and the lighter the skin, the greater the risk of skin cancer. There are three types of BCC:The most common type of basal cell carcinoma is nodular basal cell carcinoma, a flesh-colored (cream to pink), round or oval translucent nodule with overlying small blood vessels and a pearly-appearing rolled border. The second type of BCC is the pigmented lesion. This is darker than the nodular type, appearing blue, brown or black. It may be similar in appearance to the very aggressive malignant melanoma tumor. It is very important to distinguish between malignant melanomas and pigmented BCC. A third type of BCC is the superficial type, which appears as red, and often scaly, localized plaque. It is frequently confused with psoriasis or eczema.Basal cell skin cancer almost never spreads; however, large and longstanding tumours may metastasize into regional lymph nodes and surrounding areas such as nearby tissues and bone.

Various forms are recognized:
* Nodular: flesh-colored papule with ; if it ates, it becomes a "rodent ulcer" ("ulcus rodens"), an ulcerating nodule with (often) a pearly border
* Cystic: rarer and difficult to distinguish from the nodular form, which has a central cavity with fluid
* Pigmented: a variant of the nodular form that may be confused with
* Sclerosing/cicatrizing: a scar-like lesion
* Superficial: a red scaling patch.

Basal cell carcinomas present as a firm nodule, clearly growing within the skin and below it, rather than on the surface.

Color varies from that of normal skin to dark brown or black, but there is a characteristic "pearly white" translucent quality on the periphery.

When BCCs occur at sites other than the face and neck, they are usually just red, flat, scaling areas. Thus, superficial BCCs can often be confused with a patch of .

To diagnose basal cell carcinomas, a (where tissue is taken for pathological study) is done using local anesthesia. In small lesions, the tumor is, in general, removed in its entirety, whereas larger ones are biopsied first and surgically removed later if it is confirmed that it is malignant.

Histopathology: Basal cell carcinoma is a malignant epithelial tumor arising only in skin, from the basal layer of the epidermis or of the pilosebaceous adnexa. Tumor is represented by compact areas, well delineated and invading the dermis, apparent with no connection with the epidermis. Tumor cells resemble normal basal cells (small, monomorphous) and are disposed in palisade at the periphery of the tumor nests, but are spindle-shaped and irregular in the middle. Tumor clusters are separated by a reduced stroma with inflammatory infiltrate. [http://www.pathologyatlas.ro/Basal%20Cell%20Carcinoma.html 1]

Basal cell carcinomas develop in the of the . Sun light exposure leads to the formation of s, a form of DNA damage. While removes most UV-induced damage, not all crosslinks are excised. There is, therefore, cumulative DNA damage leading to s. Apart from the mutagenesis, sunlight depresses the local , possibly decreasing immune surveillance for new tumor cells.

Basal-cell carcinoma also develops as a result of basal-cell nevus syndrome, or Gorlin's syndrome, which is also characterized by odontogenic keratocysts of the jaw, palmar or plantar (sole of the foot) pits, calcification of the (in the center line of the brain) and rib abnormalities. The cause of the syndrome is a mutation in the tumor-suppressor gene at chromosome 9q22.3, which inhibits the . A mutation in the SMO gene, which is also on the hedgehog pathway, also causes basal-cell carcinoma. [Epstein EH et al., Case 3-2008: An 80-year-old woman with cutaneous basal-cell carcinoma and cysts of the jaw, N Engl J Med (2008) 358:393-401]

Basal cell carcinoma is the most common skin cancer. It occurs mainly in fair-skinned patients with a family history of this cancer. Sunlight is a factor in about two-thirds of these cancers, but one-third occur in non-sun-exposed areas. Therefore, doctors recommend sun screens.

The following methods are employed in the treatment of basal cell carcinoma (BCC):

*Mohs surgery: (or Mohs micrographic surgery) is an outpatient procedure in which the tumor is surgically excised and then immediately examined under a microscope. The base and edges are microscopically examined to verify sufficient margins before the surgical repair of the site. If the margins are insufficient, more is removed from the patient until the margins are sufficient. It is also used for ; however, the cure rate is not as high as Mohs surgery for basal cell carcinoma.

*Chemotherapy: Some superficial cancers respond to local therapy with , a agent. Topical treatment with 5% cream, with five applications per week for six weeks has a reported 70-90% success rate at reducing, even removing, the BCC [basal cell carcinoma] . Imiquimod may be used prior to surgery in order to reduce the size of the carcinoma. One can expect a great deal of inflammation with this treatment [ [http://www.skincancer.org/content/view/84/2/Chemotherapy The Skin Cancer Foundation - The Skin Cancer Foundation Seal of Recommendation ] ] .

*Radiation: is still appropriate in older patients that are not candidates for surgery.

Treating surgeons will recommend one of these modalities as appropriate treatment depending on the tumor size, location, patient age, and other variables.

Although basal cell carcinoma rarely metastasizes, it grows locally with invasion and destruction of local tissues, without stopping. The cancer can impinge on vital structures and result in loss of extension or loss of function or rarely . The vast majority of cases can be successfully treated before serious complications occur.

Basal cell cancer is the most common skin cancer. It is much more common in fair-skinned individuals with a family history of basal cell cancer and increases in incidence closer to the equator or at higher altitude. According to [http://www.skincancer.org/aboutus.php] , there are approximately 800,000 [http://www.skincancer.org/basal/index.php] new cases yearly in the alone.

Most sporadic BCC arises in small numbers on sun-exposed skin of people over age 50, although younger people may also be affected. The development of multiple basal cell cancer at an early age could be indicative of .