Metastasis, or metastatic disease (sometimes abbreviated mets), is the spread of a disease from one organ or part to another non-adjacent organ or part.[1][2] It was previously thought that only malignant tumor cells and infections have the capacity to metastasize; however, this is being reconsidered due to new research.[3] The word metastasis means "displacement" in Greek, from μετά, meta, "next", and στάσις, stasis, "placement". The plural is metastases.

Cancer occurs after a single cell in a tissue is progressively genetically damaged to produce a cancer stem cell possessing a malignant phenotype. These cancer stem cells are able to undergo uncontrolled abnormal mitosis, which serves to increase the total number of cancer cells at that location. When the area of cancer cells at the originating site becomes clinically detectable, it is called primary tumor. Some cancer cells also acquire the ability to penetrate and infiltrate surrounding normal tissues in the local area, forming a new tumor. The newly formed "daughter" tumor in the adjacent site within the tissue is called a local metastasis.

Some cancer cells acquire the ability to penetrate the walls of lymphatic and/or blood vessels, after which they are able to circulate through the bloodstream (circulating tumor cells) to other sites and tissues in the body. This process is known (respectively) as lymphatic or hematogeneous spread.

After the tumor cells come to rest at another site, they re-penetrate through the vessel or walls, continue to multiply, and eventually another clinically detectable tumor is formed. This new tumor is known as a metastatic (or secondary) tumor. Metastasis is one of three hallmarks of malignancy (contrast benign tumors).[4] Most tumors and other neoplasms can metastasize, although in varying degrees (e.g. basal cell carcinoma rarely metastasize).[4]

When tumor cells metastasize, the new tumor is called a secondary or metastatic tumor, and its cells are like those in the original tumor. This means, for example, that, if breast cancer metastasizes to the lungs, the secondary tumor is made up of abnormal breast cells, not of abnormal lung cells. The tumor in the lung is then called metastatic breast cancer, not lung cancer. 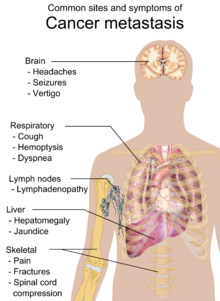 Symptoms of cancer metastasis depend location of the tumor.

The symptoms of metastasis varies with location of the tumors.

Initially, nearby lymph nodes are struck early.[5] Lungs, bones, liver, and brain are the most common metastasis locations from solid tumors.[5]

Although advanced cancer may cause pain, it is often not the first symptom.

Some patients, however, don't show any symptoms.[5]

Metastatic tumours are very common in the late stages of cancer. The spread of metastases may occur via the blood or the lymphatics or through both routes. The most common places for the metastases to occur are the lungs, liver, brain, and the bones.[6]

Metastasis is a complex series of steps in which cancer cells leave the original tumor site and migrate to other parts of the body via the bloodstream or the lymphatic system. To do so, malignant cells break away from the primary tumor and attach to and degrade proteins that make up the surrounding extracellular matrix (ECM), which separates the tumor from adjoining tissue. By degrading these proteins, cancer cells are able to breach the ECM and escape. When oral cancers metastasize, they commonly travel through the lymph system to the lymph nodes in the neck. The body resists metastasis by a variety of mechanisms through the actions of a class of proteins known as metastasis suppressors, of which about a dozen are known.[7]

Cancer researchers studying the conditions necessary for cancer metastasis have discovered that one of the critical events required is the growth of a new network of blood vessels, called tumor angiogenesis.[8] It has been found that angiogenesis inhibitors would therefore prevent the growth of metastases.[4] 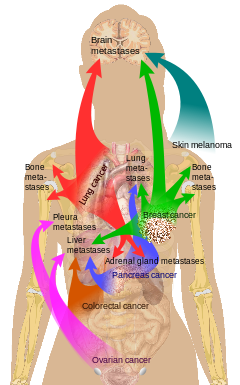 The spread into body cavities occurs by the seeding surface of the peritoneal, pleural, pericardial or subarachnoid spaces. For example, ovarian tumours spreads transperitoneally to the surface of the liver. Mesothelioma can spread through the pleural cavity.[13]

Invasion into the lymphatic system is followed by the transport of tumor cells to regional nodes and ultimately to other parts of the body. This is the most common route of metastasis for carcinomas.

This is typical of all sarcomas but it is the favored route in certain carcinomas (e.g. those originating in kidneys). Because of their thinner walls veins are more frequently invaded than arteries and metastasis follows the pattern of the venous flows.

Mechanical carriage of fragments of tumor cells by surgical instruments during operation or the use of needles during diagnostic procedures.

There is a propensity for certain tumors to seed in particular organs. This was first discussed as the "seed and soil" theory by Stephen Paget over a century ago in 1889. For example, prostate cancer usually metastasizes to the bones. In a similar manner, colon cancer has a tendency to metastasize to the liver. Stomach cancer often metastasises to the ovary in women, then it is called a Krukenberg tumor.

According to the "seed and soil" theory, it is difficult for cancer cells to survive outside their region of origin, so in order to metastasize they must find a location with similar characteristics.[14] For example, breast tumor cells, which gather calcium ions from breast milk, metastasize to bone tissue, where they can gather calcium ions from bone. Malignant melanoma spreads to the brain, presumably because neural tissue and melanocytes arise from the same cell line in the embryo.[15]

In 1928 James Ewing challenged the "seed and soil" theory and proposed that metastasis occurs purely by anatomic and mechanical routes.

It is theorized that metastasis always coincides with a primary cancer, and, as such, is a tumor that started from a cancer cell or cells in another part of the body. However, over 10% of patients presenting to oncology units will have metastases without a primary tumor found. In these cases, doctors refer to the primary tumor as "unknown" or "occult," and the patient is said to have cancer of unknown primary origin (CUP) or Unknown Primary Tumors (UPT). It is estimated that 3% of all cancers are of unknown primary origin.[16] Studies have shown that, if simple questioning does not reveal the cancer's source (coughing up blood—"probably lung", urinating blood—"probably bladder"), complex imaging will not either.[16] In some of these cases a primary tumor may appear later.

The use of immunohistochemistry has permitted pathologists to give an identity to many of these metastases. However, imaging of the indicated area only occasionally reveals a primary. In rare cases (e.g., of melanoma), no primary tumor is found, even on autopsy. It is therefore thought that some primary tumors can regress completely, but leave their metastases behind.

The cells in a metastatic tumor resemble those in the primary tumor. Once the cancerous tissue is examined under a microscope to determine the cell type, a doctor can usually tell whether that type of cell is normally found in the part of the body from which the tissue sample was taken.

For instance, breast cancer cells look the same whether they are found in the breast or have spread to another part of the body. So, if a tissue sample taken from a tumor in the lung contains cells that look like breast cells, the doctor determines that the lung tumor is a secondary tumor. Still, the determination of the primary tumor can often be very difficult, and the pathologist may have to use several adjuvant techniques, such as immunohistochemistry, FISH (fluorescent in situ hybridization), and others. Despite the use of techniques, in some cases the primary tumor remains unidentified.

Metastatic cancers may be found at the same time as the primary tumor, or months or years later. When a second tumor is found in a patient that has been treated for cancer in the past, it is more often a metastasis than another primary tumor.

It was previously thought that most cancer cells have a low metastatic potential and that there are rare cells that develop the ability to metastasize through the development of somatic mutations.[17] According to this theory, diagnosis of metastatic cancers is only possible after the event of metastasis. Traditional means of diagnosing cancer (e.g. a biopsy) would only investigate a subpopulation of the cancer cells and would very likely not sample from the subpopulation with metastatic potential.[18]

The somatic mutation theory of metastasis development has not been substantiated in human cancers. Rather, it seems that the genetic state of the primary tumor reflects the ability of that cancer to metastasize.[18] Research comparing gene expression between primary and metastatic adenocarcinomas identified a subset of genes whose expression could distinguish primary tumors from metastatic tumors, dubbed a "metastatic signature."[18] Up-regulated genes in the signature include: SNRPF, HNRPAB, DHPS and securin. Actin, myosin and MHC class II down-regulation was also associated with the signature. Additionally, the metastatic-associated expression of these genes was also observed in some primary tumors, indicating that cells with the potential to metastasize could be identified concurrently with diagnosis of the primary tumor.[19]

Expression of this metastatic signature has been correlated with a poor prognosis and has been shown to be consistent in several types of cancer. Prognosis was shown to be worse for individuals whose primary tumors expressed the metastatic signature.[18] Additionally, the expression of these metastatic-associated genes was shown to apply to other cancer types in addition to adenocarcinoma. Metastases of breast cancer, medulloblastoma and prostate cancer all had similar expression patterns of these metastasis-associated genes.[18]

The identification of this metastasis-associated signature provides promise for identifying cells with metastatic potential within the primary tumor and hope for improving the prognosis of these metastatic-associated cancers. Additionally, by identifying the genes whose expression is changed in metastasis offers potential targets to inhibit metastasis.[18]

Treatment and survival is determined by whether or not a cancer is local or has spread to other locations. If the cancer spreads to other tissues and organs, it may decrease a patient's likelihood of survival. However, there are some cancers (i.e., some forms of leukemia, a cancer of the blood) that can kill without spreading at all.

When cancer has metastasized, it may be treated with radiosurgery, chemotherapy, radiation therapy, biological therapy, hormone therapy, surgery or a combination of these. The choice of treatment generally depends on the type of primary cancer, the size and location of the metastasis, the patient's age and general health, and the types of treatments used previously. In patients diagnosed with CUP, it is still possible to treat the disease even when the primary tumor cannot be located.

The treatment options currently available are rarely able to cure metastatic cancer, though some tumors, such as testicular cancer and thyroid cancer, are usually still curable.