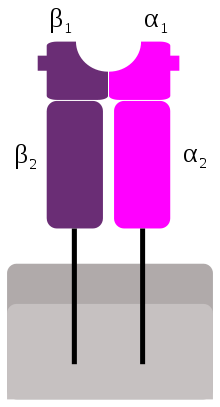 MHC (major histocompatibility complex) Class II molecules are found only on a few specialized cell types, including macrophages, dendritic cells and B cells, all of which are professional antigen-presenting cells (APCs).

The peptides presented by class II molecules are derived from extracellular proteins (not cytosolic as in class I); hence, the MHC class II-dependent pathway of antigen presentation is called the endocytic or exogenous pathway.

Loading of class II molecules must still occur inside the cell; extracellular proteins are endocytosed, digested in lysosomes, and bound by the class II MHC molecule prior to the molecule's migration to the plasma membrane.

Like MHC class I molecules, class II molecules are also heterodimers, but in this case consist of two homologous peptides, an α and β chain, both of which are encoded in the MHC. [1] The subdesignation α1, α2, etc refers to separate domains within the HLA gene; each domain is usually encoded by a different exon within the gene, and some genes have further domains that encode leader sequences, transmembrane sequences, etc.

Because class II MHC is loaded with extracellular proteins, it is mainly concerned with presentation of extracellular pathogens (for example, bacteria that might be infecting a wound or the blood). Class II molecules interact exclusively with CD4+ ("helper") T cells (TH2). The helper T cells then help to trigger an appropriate immune response which may include localized inflammation and swelling due to recruitment of phagocytes or may lead to a full-force antibody immune response due to activation of B cells.

During synthesis of class II MHC in the endoplasmic reticulum, the α and β chains are produced and complexed with a special polypeptide known as the invariant chain. The nascent MHC class II protein in the rough ER has its peptide-binding cleft blocked by the invariant chain (Ii; a trimer) to prevent it from binding cellular peptides or peptides from the endogenous pathway (such as those that would be loaded onto class I MHC).

The invariant chain also facilitates the export of class II MHC from the ER to the golgi, followed by fusion with a late endosome containing endocytosed, degraded proteins. The invariant chain is then broken down in stages by proteases called cathepsins, leaving only a small fragment known as CLIP which maintains blockage of the peptide binding cleft on the MHC molecule. An MHC class II-like structure, HLA-DM, facilitates CLIP removal and allows the binding of peptides with higher affinities. The stable class II MHC is then presented on the cell surface.