The cluster of differentiation (cluster of designation) (often abbreviated as CD) is a protocol used for the identification and investigation of cell surface molecules present on white blood cells, providing targets for immunophenotyping of cells. Physiologically, CD molecules can act in numerous ways, often acting as receptors or ligands (the molecule that activates a receptor) important to the cell. A signal cascade is usually initiated, altering the behavior of the cell (see cell signaling). Some CD proteins do not play a role in cell signaling, but have other functions, such as cell adhesion. CD for humans is numbered up to 350 most recently (as of 2009[update]).[1][2]

The CD nomenclature was proposed and established in the 1st International Workshop and Conference on Human Leukocyte Differentiation Antigens (HLDA), which was held in Paris in 1982.[3][4] This system was intended for the classification of the many monoclonal antibodies (mAbs) generated by different laboratories around the world against epitopes on the surface molecules of leukocytes (white blood cells). Since then, its use has expanded to many other cell types, and more than 320 CD unique clusters and subclusters have been identified. The proposed surface molecule is assigned a CD number once two specific monoclonal antibodies (mAb) are shown to bind to the molecule. If the molecule has not been well-characterized, or has only one mAb, it is usually given the provisional indicator "w" (as in "CDw186").

Cell populations are usually defined using a '+' or a '-' symbol to indicate whether a certain cell fraction expresses or lacks a CD molecule. For example, a "CD34+, CD31-" cell is one that expresses CD34, but not CD31. This CD combination typically corresponds to a stem cell, as opposed to a fully differentiated endothelial cell. Some cell populations can also be defined as hi, mid or low(alternatively bright, mid or dim), indicating an overall variability in CD expression, particularly when compared to other cells being studied. A review of the development of T cells in the thymus uses this nomenclature to identify cells transitioning from CD4mid/CD8mid double positive cells to CD4hi/CD8mid.[5] 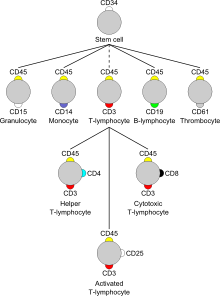 The CD system is commonly used as cell markers in immunophenotyping, allowing cells to be defined based on what molecules are present on their surface. These markers are often used to associate cells with certain immune functions. While using one CD molecule to define populations is uncommon (though a few examples exist), combining markers has allowed for cell types with very specific definitions within the immune system.

Two commonly used CD molecules are CD4 and CD8, which are, in general, used as markers for helper and cytotoxic T cells, respectively. These molecules are defined in combination with CD3+, as some other leukocytes also express these CD molecules (some macrophages express low levels of CD4; dendritic cells express high levels of CD8). Human immunodeficiency virus (HIV) binds CD4 and a chemokine receptor on the surface of a T helper cell to gain entry. The number of CD4 and CD8 T cells in blood is often used to monitor the progression of HIV infection.

While CD molecules are very useful in defining leukocytes, they are not merely markers on the cell surface. While only a fraction of known CD molecules have been thoroughly characterised, most of them have an important function. In the example of CD4 & CD8, these molecules are critical in antigen recognition.