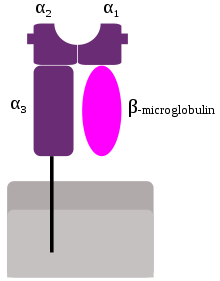 Schematic representation of MHC class I

MHC class I molecules are one of two primary classes of major histocompatibility complex (MHC) molecules (the other one being MHC class II) and are found on every nucleated cell of the body (and thus not on red blood cells, though they are found on platelets). Their function is to display fragments of proteins from within the cell to T cells; healthy cells will be ignored, while cells containing foreign proteins will be attacked by the immune system. Because MHC class I molecules present peptides derived from cytosolic proteins, the pathway of MHC class I presentation is often called the cytosolic or endogenous pathway.[1]

Class I MHC molecules bind peptides generated mainly from degradation of cytosolic proteins by the proteasome. The MHC I:peptide complex is then inserted into the plasma membrane of the cell. The peptide is bound to the extracellular part of the class I MHC molecule. Thus, the function of the class I MHC is to display intracellular proteins to cytotoxic T cells (CTLs). However, class I MHC can also present peptides generated from exogenous proteins, in a process known as cross-presentation.

A normal cell will display peptides from normal cellular protein turnover on its class I MHC, and CTLs will not be activated in response to them due to central and peripheral tolerance mechanisms. When a cell expresses foreign proteins, such as after viral infection, a fraction of the class I MHC will display these peptides on the cell surface. Consequently, CTLs specific for the MHC:peptide complex will recognize and kill the presenting cell.

Alternatively, class I MHC itself can serve as an inhibitory ligand for natural killer cells (NKs). Reduction in the normal levels of surface class I MHC, a mechanism employed by some viruses during immune evasion or in certain tumors, will activate NK cell killing.

MHC class I molecules consist of two polypeptide chains, α and β2-microglobulin (b2m). The two chains are linked noncovalently via interaction of b2m and the α3 domain. Only the α chain is polymorphic and encoded by a HLA gene, while the b2m subunit is not polymorphic and encoded by the Beta-2 microglobulin gene. The α3 domain is plasma membrane-spanning and interacts with the CD8 co-receptor of T-cells. The α1 and α2 domains fold to make up a groove for peptides to bind. MHC class I molecules bind peptides that are 8-10 amino acid in length (Parham 87). 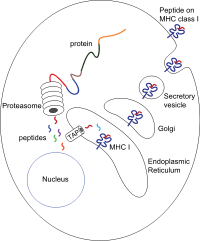 Simplified diagram of cytoplasmic protein degradation by the proteasome, transport into endoplasmic reticulum by TAP complex, loading on MHC class I, and transport to the surface for presentation

The peptides are generated mainly in the cytosol by the proteasome. The proteasome is a macromolecule that consists of 28 subunits, of which half affect proteolytic activity. The proteasome degrades intracellular proteins into small peptides that are then released into the cytosol. The peptides have to be translocated from the cytosol into the endoplasmic reticulum (ER) to meet the MHC class I molecule, whose peptide-binding site is in the lumen of the ER. They have membrane proximal Ig fold.

The peptide-loading process involves several other molecules that form a large multimeric complex consisting of TAP, tapasin, calreticulin, calnexin, and Erp57. Calnexin acts to stabilize the class I MHC α chains prior to β2m binding. Following complete assembly of the MHC molecule, calnexin dissociates. The MHC molecule lacking a bound peptide is inherently unstable and requires the binding of the chaperones calreticulin and Erp57. Additionally, tapasin binds to the MHC molecule and serves to link it to the TAP proteins, thus facilitating enhanced peptide loading and colocalization.

Once the peptide is loaded onto the MHC class I molecule, the complex dissociates and it leaves the ER through the secretory pathway to reach the cell surface. The transport of the MHC class I molecules through the secretory pathway involves several posttranslational modifications of the MHC molecule. Some of the posttranslational modifications occur in the ER and involve change to the N-glycan regions of the protein, followed by extensive changes to the N-glycans in the Golgi apparatus. The N-glycans mature fully before they reach the cell surface.

Peptides that fail to bind MHC class I molecules in the lumen of the endoplasmic reticulum (ER) are removed from the ER via the sec61 channel into the cytosol,[2][3] where they might undergo further trimming in size, and might be translocated by TAP back into ER for binding to an MHC class I molecule.

For example, an interaction of sec61 with bovine albumin has been observed.[4]

MHC class I molecules are loaded with peptides generated from the degradation of ubiquitinated cytosolic proteins in proteasomes. As viruses induce cellular expression of viral proteins, some of these products are tagged for degradation, with the resulting peptide fragments entering the endoplasmic reticulum and binding to MHC I molecules. It is in this way, the MHC class I - dependent pathway of antigen presentation, that the virus infected cells signal T-Cells that abnormal proteins are being produced as a result of infection

The fate of the virus-infected cell is almost always induction of apoptosis through cell-mediated immunity, reducing the risk of infecting neighboring cells. As an evolutionary response to this method of immune surveillance, many viruses are able to down-regulate or otherwise prevent the presentation of MHC class I molecules on the cell surface. In contrast to cytotoxic T lymphocytes, Natural killer (NK) cells are normally inactivated upon recognizing MHC I molecules on the surface of cells. Therefore, in the absence of MHC I molecules, NK cells are activated and recognize the cell as aberrant, suggesting they may be infected by viruses attempting to evade immune destruction. Several human cancers also show down-regulation of MHC I, giving transformed cells the same survival advantage of being able to avoid normal immune surveillance designed to destroy any infected or transformed cells. [5]