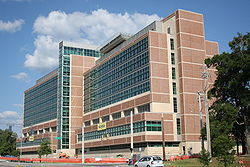 Cancer research is basic research into cancer in order to identify causes and develop strategies for prevention, diagnosis, treatments and cure.

Cancer research ranges from epidemiology, molecular bioscience to the performance of clinical trials to evaluate and compare applications of the various cancer treatment. These applications include surgery, radiation therapy, chemotherapy, hormone therapy, Immunotherapy and combined treatment modalities such as chemo-radiotherapy. Starting in the mid-1990s, the emphasis in clinical cancer research shifted towards therapies derived from biotechnology research, such as immunotherapy and gene therapy.

This type of research involves many different disciplines including genetics, diet, environmental factors (i.e. chemical carcinogens). In regard to investigation of causes and potential targets for therapy, the route used starts with data obtained from clinical observations, enters basic research, and, once convincing and independently confirmed results are obtained, proceeds with clinical research, involving appropriately designed trials on consenting human subjects, with aim to test safety and efficiency of the therapeutic intervention method. Important part of basic research is characterization of the potential function of mechanisms of carcinogenesis, in regard to the types of genetic and epigenetic changes that are associated with cancer development. The mouse is often used as a mammalian model for manipulation of the function of genes that play a role in tumor formation, while basic aspects of tumor initiation, such as mutagenesis, are assayed on cultures of bacteria and mammalian cells.

The goal of oncogenomics is to identify new oncogenes or tumor suppressor genes that may provide new insights into cancer diagnosis, predicting clinical outcome of cancers, and new targets for cancer therapies. As the Cancer Genome Project stated in a 2004 review article, "a central aim of cancer research has been to identify the mutated genes that are causally implicated in oncogenesis (cancer genes)."[4] The Cancer Genome Atlas project is a related effort investigating the genomic changes associated with cancer, while the COSMIC cancer database documents acquired genetic mutations from hundreds of thousands of human cancer samples.[5]

These large scale projects, involving about 350 different types of tumour, have identified ~130,000 mutations in ~3000 genes that have been mutated in the tumours. The majority occurred in 319 genes of which 286 were tumour supressor genes and 33 oncogenes.

In later stages, tumors can develop a resistance to cancer treatment. The identification of oncogenes and tumor suppressor genes is important to understand tumor progression and treatment success. The role of a given gene in cancer progression may vary tremendously, depending on the stage and type of cancer involved.[6]

In January 2007 researchers of the University of Alberta reported preliminary results of dichloroacetate (DCA) causing regression in several cancers in vitro, including lung, breast and brain tumors.[8] Since the compound DCA itself cannot be patented it could be an inexpensive alternative to other treatments, depending of course on whether the method of using DCA in the treatment of cancer is patentable. Clinical use of DCA will require further public/private investment for clinical trials.[9] The initial research was funded by the Canadian Institutes of Health Research.[10]

Newsweek magazine published an article criticising the use of lab rats on cancer research because even though researchers frequently manage to cure lab mice transplanted with human tumors, few of those achievements are relevant to humanity.[14] Oncologist Paul Bunn, from the International Association for the Study of Lung Cancer[15] said: "We put a human tumor under the mouse's skin, and that microenvironment doesn't reflect a person's—the blood vessels, inflammatory cells or cells of the immune system".[14] Fran Visco founder of the National Breast Cancer Coalition completed:"We cure cancer in animals all the time, but not in people."[14]

Some methods, like Dichloroacetate[9] and Coley's Toxins, cannot be patented and thus would not garner the investment interest towards research from the pharmaceutical industry. Many claim that this is why such research is often slow moving, as it lacks funding from pharmaceutical companies.

The organizational behavior of the large institutions and corporations that research cancer, may unduly favor low-risk research into small incremental advancements, over innovative research that might discover radically new and dramatically improved therapy.[16][17] Breakthrough-ideas are frequently scoffed at by the powers that be.[18]