Mastitis is the inflammation of breast tissue.[1] S. aureus is the most common etiological organism responsible, but S. epidermidis and streptococci are occasionally isolated as well.[2]

Popular usage of the term mastitis varies by geographic region. Outside the US it is commonly used for puerperal and nonpuerperal cases, in the US the term nonpuerperal mastitis is rarely used and alternative names such as duct ectasia, subareolar abscess and plasma cell mastitis are more frequently used.

In this wikipedia article mastitis is used in the original sense of the definition as inflammation of the breast with additional qualifiers where appropriate.

It is called puerperal mastitis when it occurs in lactating mothers and non-puerperal otherwise. Mastitis can occur in men, albeit rarely. Inflammatory breast cancer has symptoms very similar to mastitis and must be ruled out.

The popular misconception that mastitis in humans is an infection is highly misleading and in many cases incorrect. Infections play only a minor role in the pathogenesis of both puerperal and nonpuerperal mastitis in humans and many cases of mastitis are completely aseptic under normal hygienic conditions. Infection as primary cause of mastitis is presumed to be more prevalent in veterinary mastitis and poor hygienic conditions.[citation needed]

The symptoms are similar for puerperal and nonpuerperal mastitis but predisposing factors and treatment can be very different.

Puerperal mastitis is the inflammation of breast in connection with pregnancy, breastfeeding or weaning. Since one of the most prominent symptoms is tension and engorgement of the breast, it is thought to be caused by blocked milk ducts or milk excess. It is relatively common; estimates range depending on methodology between 5-33%. However only about 0.4-0.5% of breastfeeding mothers develop an abscess.

The term nonpuerperal mastitis describes inflammatory lesions of the breast occurring unrelated to pregnancy and breastfeeding. This article includes description of mastitis as well as various kinds of mammary abscesses. Skin related conditions like dermatitis and foliculitis are a separate entity.

Names for non-puerperal mastitis are not used very consistently and include Mastitis, Subareolar Abscess, Duct Ectasia, Periductal Inflammation, Zuska's Disease and others.

Lactation mastitis usually affects only one breast and the symptoms can develop quickly.[3] The signs and symptoms usually appear suddenly and they include:

Some women may also experience flu-like symptoms such as:

Contact should be made with a health care provider with special breastfeeding competence as soon as the patient recognizes the combination of signs and symptoms. Most of the women first experience the flu-like symptoms and just after they may notice a sore red area on the breast. Also, women should seek medical care if they notice any abnormal discharge from the nipples, if breast pain is making it difficult to function each day or they have prolonged, unexplained breast pain.

Since the 1980s mastitis has often been divided into non-infectious and infectious sub-groups. However, recent research [6] suggests that it may not be feasible to make divisions in this way. It has been shown that types and amounts of potentially pathogenic bacteria in breast milk are not correlated to the severity of symptoms. Moreover, although only 15% of women with mastitis in Kvist et al.'s study were given antibiotics, all recovered and few had recurring symptoms. Many healthy breastfeeding women wishing to donate breast milk have potentially pathogenic bacteria in their milk but have no symptoms of mastitis.

Mastitis typically develops when the milk is not properly removed from the breast. Milk stasis can lead to the milk ducts in the breasts becoming blocked, as the breast milk not being properly and regularly expressed.[7] It has also been suggested that blocked milk ducts can occur as a result of pressure on the breast, such as tight-fitting clothing or an over-restrictive bra, although there is sparse evidence for this supposition . Mastitis may occur when the baby is not appropriately attached to the breast while feeding, when the baby has infrequent feeds or has problems suckling the milk out of the breast.

Experts are still unsure why breast milk can cause the breast tissue to become inflamed. One theory is that it may be due to the presence of cytokines in breast milk. Cytokines are special proteins that are used by the immune system and are passed on to the baby in order to help them resist infection. It may be the case that the woman's immune system mistakes these cytokines for a bacterial or viral infection and responds by inflaming the breast tissue in an attempt to stop the spread of what the body perceives as an infection.

Mastitis is quite common among breastfeeding women. The WHO estimates that although incidences vary between 2.6% and 33%, the prevalence globally is approximately 10% of breastfeeding women. Most mothers who develop mastitis usually do so within the first few weeks after delivery. Most breast infections occur within the first or second month after delivery or at the time of weaning.[10] However, in rare cases it affects women who are not breastfeeding.[11]

Mastitis can also develop after nipple piercing. In some rare cases, however, Mastitis can occur in men.

Women who are breastfeeding are at risk for developing mastitis especially if they have sore or cracked nipples or have had mastitis before while breastfeeding another baby. Also, the chances of getting mastitis increases if women use only one position to breastfeed or wear a tight-fitting bra, which may restrict milk flow [12]

Women with diabetes, chronic illness, AIDS, or an impaired immune system may be more susceptible to the development of mastitis.[13]

Complications that may arise from mastitis include recurrence, milk stasis and abscess. The abscess is the most severe complication that women can get from this condition. Also, women who have had mastitis once are likely to develop it again with a future child or with the same infant. Recurrence appears especially in cases of delayed or inadequate treatment.

Milk stasis is another complication that may arise from mastitis and it occurs when the milk is not completely drained from the breast. This causes increased pressure on the ducts and leakage of milk into surrounding breast tissue, which can lead to pain and inflammation.[14]

Delayed treatment or inadequate treatment, especially in mastitis related to milk stasis, may lead to the formation of an abscess within the breast tissue. An abscess is a collection of pus that develops into the breast which ultimately requires surgical drainage.

The diagnosis of mastitis and breast abscess can usually be made based on a physical examination.[15] The doctor will also take into account the signs and symptoms of the condition.

In cases of infectious mastitis, cultures may be needed in order to determine what type of organism is causing the infection. Cultures are helpful in deciding the specific type of antibiotics that will be used in curing the disease. These cultures may be taken either from the breast milk or of the material aspirated from an abscess.

Mammograms or breast biopsies are normally performed on women who do not respond to treatment or on non-breastfeeding women. This type of tests is sometimes ordered to exclude the possibility of a rare type of breast cancer which causes symptoms similar to those of mastitis.

Breast cancer may coincide with or mimic symptoms of mastitis. Only full resolution of symptoms and careful examination are sufficient to exclude the diagnosis of breast cancer.

Mastitis does however cause great difficulties in diagnosis of breast cancer and delayed diagnosis and treatment can result in worse outcome.

Breast cancer may coincide with mastitis or develop shortly afterwards. All suspicious symptoms that do not completely disappear within 5 weeks must be investigated.

Breast cancer incidence during pregnancy and lactation is assumed to be the same as in controls. Course and prognosis are also very similar to age matched controls.[16][17] However diagnosis during lactation is particularly problematic, often leading to delayed diagnosis and treatment.

Some data suggests that noninflammatory breast cancer incidence is increased within a year following episodes of nonpuerperal mastitis and special care is required for followup cancer prevention screening.[18] So far only data from short term observation is available and total risk increase can not be judged. Because of the very short time between presentation of mastitis and breast cancer in this study it is considered very unlikely that the inflammation had any substantial role in carcinogenesis, rather it would appear that some precancerous lesions may increase the risk of inflammation (hyperplasia causing duct obstruction, hypersensitivity to cytokines or hormones) or the lesions may have common predisposing factors.

A very serious type of breast cancer called inflammatory breast cancer presents with similar symptoms as mastitis (both puerperal and nonpuerperal). It is the most aggressive type of breast cancer with the highest mortality rate. The inflammatory phenotype of IBC is thought to be mostly caused by invasion and blocking of dermal lymphatics, however it was recently shown that NF-κB target genes activation may significantly contribute to the inflammatory phenotype. Case reports show that inflammatory breast cancer symptoms can flare up following injury or inflammation making it even more likely to be mistaken for mastitis. Symptoms are also known to partially respond to progesterone and antibiotics, reaction to other common medications can not be ruled out at this point.[19][20][21][22][23] 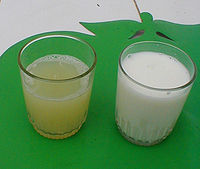 Mastitis occurs in domestic animals as in human beings, and is especially a concern in livestock, since milk from the affected udders of livestock may enter the food supply and pose a health risk.

It is a major condition in some species, like dairy cows. It has a tremendous economic importance for the dairy industry. It is also of concern for public health. The same considerations apply to mastitis in sheep and goats and other milk producing females. It is also of economic importance in the sow, but, in this species, it is not related to public health. In other domestic females (queen, mare, etc.), it is more an individual illness dealt with by veterinary practioners.