Fissure of the nipple

Fissure of the nipple

Fissure of the nipple, also known as jogger's nipple, is a condition that can be caused by friction that can result in soreness, dryness or irritation to, or bleeding of, one or both nipples during and/or following running or other physical exercise. This condition is also experienced by women who breastfeed[1] and by surfers who do not wear rash guards.

Jogger's nipple is caused by friction from the repeated rubbing of a t-shirt or other upper body clothing against the nipples during a prolonged period of exercise.

The condition is suffered mainly by runners. Long-distance runners are especially prone, because they are exposed to the friction on the nipple for the greatest period of time. However, it is not only suffered by athletes; the inside of a badge, a logo on normal items of clothing, or breastfeeding[1] can also cause the friction which results in this condition. 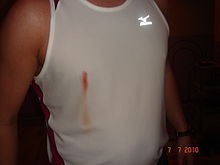 Runner's Nipple after a 10 k run on a hot day

The condition is easily preventable and treatable. Viable methods include:

This condition should clear within a few days. If not, medical attention is warranted. Other skin conditions such as eczema, psoriasis, impetigo, fungal infections or an allergic reaction can cause nipple pain and changes in the appearance of the skin. In women, breastfeeding (often complicated by thrush infection),[1], hormonal changes in early pregnancy or during menstruation, as well as certain types of breast cancer, i.e. Paget's disease of the breast, can also cause nipple soreness and pain.