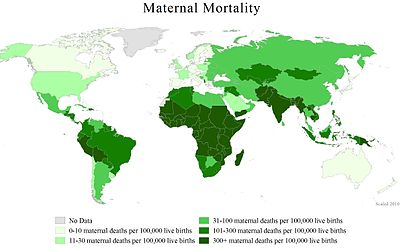 Maternal death, or maternal mortality, also "obstetrical death" is the death of a woman during or shortly after a pregnancy. In 2010, researchers from the University of Washington and the University of Queensland in Brisbane, Australia, estimated global maternal mortality in 2008 at 342,900 (down from 526,300 in 1980), of which less than 1% occurred in the developed world.[1] However, most of these deaths have been medically preventable for decades, as treatments to avoid such deaths have been well-known since the 1950s.

According to the World Health Organization (WHO), "A maternal death is defined as the death of a woman while pregnant or within 42 days of termination of pregnancy, irrespective of the duration and site of the pregnancy, from any cause related to or aggravated by the pregnancy or its management but not from accidental or incidental causes."[2]

Maternal mortality is a sentinel event to assess the quality of a health care system. However, a number of issues need to be recognized. First of all, the WHO definition is one of many; other definitions may also include accidental and incidental causes. Cases with "incidental causes" include deaths secondary to violence against women that may be related to the pregnancy and be affected by the socioeconomic and cultural environment. Also, it has been reported that about 10% of maternal deaths may occur late, that is after 42 days after a termination or delivery,[3] thus, some definitions extend the time period of observation to one year after the end of the gestation. Further, it is well recognized that maternal mortality numbers are often significantly underreported.[4]

Reducing the maternal mortality by three quarters between 1990 and 2015 is a specific part of Goal 5 -Improving Maternal Health - of the eight Millennium Development Goals; its progress is monitored at mdgmonitor.org[5]

As stated by the WHO in its 2005 World Health Report "Make Every Mother and Child Count", they are: severe bleeding/hemorrhage (25%), infections (13%), unsafe abortions (13%), eclampsia (12%), obstructed labour (8%), other direct causes (8%), and indirect causes (20%). Indirect causes such as malaria, anaemia,[6] HIV/AIDS and cardiovascular disease, complicate pregnancy or are aggravated by it.

Forty-five percent of postpartum deaths occur within 24 hours.[7] Over 90% of maternal deaths occur in developing countries. In comparison, pregnancy-associated homicide accounts for 2 to 10 deaths per 100000 live births, possibly substantially higher due to underreporting.[8]

Another issue that is associated with maternal mortality is the lack of access to skilled medical care during childbirth and the distance of traveling to the nearest clinic to receive proper care. In developing nations, as well as rural areas, this is especially true. Traveling to and back from the clinic is very difficult and costly, especially to poor families when time could have been used for working and providing incomes. Even so, the nearest clinic may not provide decent care because of the lack of qualified staff and equipment such as ones in the Guatemalan highlands.[14]

The death rate for women giving birth plummeted in the 20th century.

The historical level of maternal deaths is probably around 1 in 100 births.[15] Mortality rates reached very high levels in maternity institutions in the 1800s, sometimes climbing to 40 percent of birthgiving women. At the beginning of the 1900s, maternal death rates were around 1 in 100 for live births.[citation needed] The number in 2005 in the United States was 11 in 100,000, a decline by two orders of magnitude,[12] although that figure has begun to rise in recent years, having nearly tripled over the decade up to 2010 in California.[16] The increase may be due to a change in reporting methods by the CDC in 1999. [17]

The decline in maternal deaths has been due largely to improved asepsis, fluid management and blood transfusion, and better prenatal care.[citation needed] Recommendations for reducing maternal mortality include access to health care, access to family planning services, and emergency obstetric care, funding and intrapartum care.[18]

A recent study showed that patients older than 34 yr and non-Hispanic black women were disproportionately represented. Common comorbidities included hypertensive disorders of pregnancy, previous Caesarean delivery, diabetes mellitus, preexisting hypertension, and multiple gestation.[19] In this study, the authors examined both near-miss morbidity and actual mortality to increase numbers for analysis of morbidity and mortality associated with delivery. This article was also discussed on that journal's blog.[20]