Streptococcus pyogenes (red-stained spheres) is responsible for most cases of severe puerperal fever. It is commonly found in the throat and nasopharynx of otherwise healthy carriers, particularly during winter. Details: A pus specimen, viewed using Pappenheim's stain @ 900x magnification

Puerperal fever or childbed fever, is a bacterial infection contracted by women during childbirth or miscarriage. It can develop into puerperal sepsis, which is a serious form of septicaemia. If untreated, it is often fatal.

From the 1600s through the mid to late 1800s, the majority of childbed fever cases were caused by the doctors themselves. With no knowledge of germs, doctors did not believe hand washing was needed. Statements like Dr. Charles Meigs', a leading obstetrician and teacher from Philadelphia: “Doctors are gentlemen, and gentlemen’s hands are clean”, were the attitude of the time.[1] In the 1800s Dr. Ignaz Semmelweis noticed that women giving birth at home had a much lower incidence of childbed fever than those giving birth in the doctor's maternity ward. His investigation discovered that washing hands with an antiseptic solution before a delivery reduced childbed fever fatalities by 90%.[2] Despite the publication of this information, doctors still would not wash. The idea conflicted with both the existing medical concepts and more importantly, with the image that doctors had of themselves. That intransigence consigned large numbers of mothers to painful, lingering deaths.[3] The scorn and ridicule of doctors was so extreme that Semmelweis moved from Vienna and was eventually committed to a mental asylum where he died.[4]

Dr. Semmelweis was not the only doctor ignored after sounding a warning about this issue: in Treatise on the Epidemic of Puerperal Fever (1795), ex-naval surgeon and Aberdonian accoucheur Dr. Alexander Gordon warned that the disease was transmitted from one case to another by midwives and doctors. Dr. Gordon wrote, "It is a disagreeable declaration for me to mention, that I myself was the means of carrying the infection to a great number of women."[5]

The similarity between the resistance of that time with the resistance of today's doctors when faced with concepts like "using checklists"[6] or "evidence-based medicine" is alarming and has caused some speculation that the actual problem originates in the ego focus that prevails in the culture of doctoring.[7][improper synthesis?]

Elizabeth of York, the mother of Henry VIII of England, died one week after giving birth to a daughter. Other significant victims were author Jean Webster, Jane Seymour, Katherine Parr, Isabella Beeton and Mary Wollstonecraft (1759–1797), author of Vindication of the Rights of Woman, who died ten days after giving birth to William Godwin's daughter, who grew up to be Mary Shelley, author of Frankenstein. J.J. Rousseau's mother, Suzanne Barnard, had puerperal fever. Rousseau said, "I came into the world with so few signs of life that little hope was entertained of preserving me"; an aunt nursed and saved him, for which, he said, "I freely forgive you."[8]

Puerperal fever is now rare in the West due to improved hygiene during delivery, and the few infections that do occur are usually treatable with antibiotics.

Puerperal fever (from the Latin puer, male child (boy)), is no longer favored as a diagnostic category. Instead, contemporary terminology specifies:[9]

The most common causative agents in inflammation of the inner lining of the uterus (this lining is known as the endometrium) are Staphylococcus aureus and Streptococcus spp.[10]

There are several strains of GAS. Some strains usually cause skin infections, they are more common in warm climates, and they usually cause local rather than systemic effects. Other strains, in particular Streptococcus pyogenes, attack the throat and cause severe infections. The human nasopharynx is the main reservoir of S. pyogenes, and infection is more common during winter, and it is rarely found in the normal vaginal flora. It is likely that most puerperal hemolytic infections arise from this reservoir in the patient or attendants.[12]

Group B Streptococcus (Streptococcus agalactiae) causes pneumonia and meningitis in neonates and the elderly, with occasional systemic bacteremia. They can also colonize the intestines and the female reproductive tract, increasing the risk for transmission to the infant. The American College of Obstetricians and Gynecologists, American Academy of Pediatrics and the Centers for Disease Control recommend all pregnant women between 35 and 37 weeks gestation should be tested for GBS.[13] 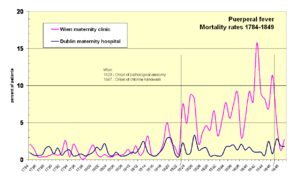 In his 1861 book, Ignaz Semmelweis presented evidence to demonstrate that the advent of pathological anatomy in Vienna in 1823 (vertical line) was correlated to the incidence of fatal childbed fever there. Onset of chlorine handwash in 1847 marked by vertical line. Rates for Dublin maternity hospital, which had no pathological anatomy, is shown for comparison (view rates). His efforts were futile, however.

Hospitals for childbirth became common in the 17th century in many European cities. These "lying-in" hospitals were established at a time when there was no knowledge of antisepsis or epidemiology, and patients were subjected to crowding, frequent vaginal examinations, and the use of contaminated instruments, dressings, and bedding. It was common for a doctor to deliver one baby after another, without washing his hands or changing clothes in between.

The first recorded epidemic of puerperal fever occurred at the Hôtel-Dieu de Paris in 1646. Hospitals throughout Europe and America consistently reported death rates between 20% to 25% of all women giving birth, punctuated by intermittent epidemics with up to 100% fatalities of women giving birth in childbirth wards.[15]

A number of physicians began to suspect contagion and hygiene as causal factors in spreading puerperal fever. In 1795, Alexander Gordon of Aberdeen, Scotland suggested that the fevers were infectious processes, that physicians were the carrier, and that "I myself was the means of carrying the infection to a great number of women.”[16] Thomas Watson, Professor of Medicine at King's College Hospital, London, wrote in 1842: "Wherever puerperal fever is rife, or when a practitioner has attended any one instance of it, he should use most diligent ablution." Watson recommended handwashing with chlorine solution and changes of clothing for obstetric attendants "to prevent the practitioner becoming a vehicle of contagion and death between one patient and another." [17]

In 1843, Oliver Wendell Holmes published The Contagiousness of Puerperal Fever[18] and controversially concluded that puerperal fever was frequently carried from patient to patient by physicians and nurses; he suggested that clean clothing and avoidance of autopsies by those aiding birth would prevent the spread of puerperal fever.[19] Holmes stated, "... in my own family, I had rather that those I esteemed the most should be delivered unaided, in a stable, by the mangerside, than that they should receive the best help, in the fairest apartment, but exposed to the vapors of this pitiless disease."[20]

Holmes' conclusions were ridiculed by many contemporaries, including Charles Delucena Meigs, a well-known obstetrician, who stated, "Doctors are gentlemen, and gentlemen's hands are clean."[21] Richard Gordon states that Holmes' exhortations "outraged obstetricians, particularly in Philadelphia".[22] In those days, "surgeons operated in blood-stiffened frock coats - the stiffer the coat, the prouder the busy surgeon", "pus was as inseparable from surgery as blood", and "Cleanliness was next to prudishness". He quotes Sir Frederick Treves on that era: "There was no object in being clean...Indeed, cleanliness was out of place. It was considered to be finicking and affected. An executioner might as well manicure his nails before chopping off a head".[23]

In 1844, Ignaz Semmelweis was appointed assistant lecturer in the First Obstetric Division of the Vienna General Hospital (Allgemeines Krankenhaus), where medical students received their training. Working without knowledge of Holmes' essay, Semmelweis noticed his ward’s 16% mortality rate from fever was substantially higher than the 2% mortality rate in the Second Division, where midwifery students were trained. Semmelweis also noticed that puerperal fever was rare in women who gave birth before arriving at the hospital. Semmelweis noted that doctors in First Division performed autopsies each morning on women who had died the previous day, but the midwives were not required or allowed to perform such autopsies. He made the connection between the autopsies and puerperal fever after a colleague, Jakob Kolletschka, died of septicaemia after accidentally cutting his hand while performing an autopsy.

Semmelweis began experimenting with various cleansing agents and, from May 1847, ordered all doctors and students working in the First Division wash their hands in chlorinated lime solution before starting ward work, and later before each vaginal examination. The mortality rate from puerperal fever in the division fell from 18% in May 1847 to less than 3% in June–November of the same year.[24] While his results were extraordinary, he was treated with skepticism and ridicule (see Response to Semmelweis).

He did the same work in St. Rochus hospital in Pest, Hungary, and published his findings in 1860, but his discovery was again ignored.[25]

The incidence of puerperal sepsis shows wide variations among published literature — this may be related to different definition, recording etc.[14]

Today in the United States, puerperal infection is believed to occur in between one and 8 percent of all deliveries. About three die from puerperal sepsis for every 100,000 deliveries. The single most important risk factor is Caesarean section.[26]

Puerperal fever or childbed fever in the 18th and 19th centuries affected, on average, six to 9 women in every 1000 deliveries, killing two to three of them with peritonitis or septicemia. It was the single most common cause of maternal mortality, accounting for about half of all deaths related to childbirth, and was second only to tuberculosis in killing women of childbearing age. A rough estimate is that about 250,000–500,000 died from puerperal fever in the 18th and 19th centuries in England and Wales alone.[28]