Myocarditis is inflammation of heart muscle (myocardium). It resembles a heart attack but coronary arteries are not blocked.

Myocarditis is most often due to infection by common viruses, such as parvovirus B19, less commonly non-viral pathogens such as Borrelia burgdorferi (Lyme disease) or Trypanosoma cruzi, or as a hypersensitivity response to drugs.[1]

The definition of myocarditis varies, but the central feature is an infection of the heart, with an inflammatory infiltrate, and damage to the heart muscle, without the blockage of coronary arteries that define a heart attack (myocardial infarction) or other common non-infectious causes.[2] Myocarditis may or may not include death (necrosis) of heart tissue. It may include dilated cardiomyopathy.[1]

Myocarditis is often an autoimmune reaction. Streptococcal M protein and coxsackievirus B have regions (epitopes) that are immunologically similar to cardiac myosin. After the virus is gone, the immune system may attack cardiac myosin.[1]

Because a definitive diagnosis requires a heart biopsy, which doctors are reluctant to do because they are invasive, statistics on the incidence of myocarditis vary widely.[1]

The consequences of myocarditis thus also vary widely. It can cause a mild disease without any symptoms that resolves itself, or it may cause chest pain, heart failure, or sudden death. An acute myocardial infarction-like syndrome with normal coronary arteries has a good prognosis. Heart failure, even with dilated left ventricle, may have a good prognosis. Ventricular arrhythmias and high-degree heart block have a poor prognosis. Loss of right ventricular function is a strong predictor of death.[1]

Since myocarditis is often due to a viral illness, many patients give a history of symptoms consistent with a recent viral infection, including fever, rash, diarrhea, joint pains, and easy fatigueability.

Myocarditis is often associated with pericarditis, and many patients present with signs and symptoms that suggest concurrent myocarditis and pericarditis.

A large number of causes of myocarditis have been identified, but often a cause cannot be found. In Europe and North America, viruses are common culprits. Worldwide, however, the most common cause is Chagas' disease, an illness endemic to Central and South America that is due to infection by the protozoan Trypanosoma cruzi.[3]

Bacterial myocarditis is rare in patients without immunodeficiency. 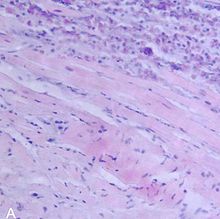 The electrocardiogram (ECG) findings most commonly seen in myocarditis are diffuse T wave inversions; saddle-shaped ST-segment elevations may be present (these are also seen in pericarditis).[3]

The gold standard is still biopsy of the myocardium, generally done in the setting of angiography. A small tissue sample of the endocardium and myocardium is taken, and investigated by a pathologist by light microscopy and—if necessary—immunochemistry and special staining methods. Histopathological features are: myocardial interstitium with abundant edema and inflammatory infiltrate, rich in lymphocytes and macrophages. Focal destruction of myocytes explains the myocardial pump failure.[3]

Cardiac magnetic resonance imaging (cMRI or CMR) has been shown to be very useful in diagnosing myocarditis by visualizing markers for inflammation of the myocardium.[7] Recently, consensus criteria for the diagnosis of myocarditis by CMR have been published [8]

As most viral infections cannot be treated with directed therapy, symptomatic treatment is the only form of therapy for those forms of myocarditis.[9] In the acute phase, supportive therapy including bed rest is indicated. For symptomatic patients, digoxin and diuretics provide clinical improvement. For patients with moderate to severe dysfunction, cardiac function can be supported by use of inotropes such as Milrinone in acute phase followed by oral therapy with ACE inhibitors (Captopril, Lisinopril) when tolerated. People who do not respond to conventional therapy are candidates for bridge therapy with left ventricular assist devices (LVADs). Heart transplantation is reserved for patients who fail to improve with conventional therapy.[10]

In several small case series and randomized control trials, systemic corticosteroids have shown to have beneficial effects in patients with proven myocarditis.[10] However, data on the usefulness of corticosteroids should be interpreted with caution since 58% of adults recover spontaneously while most studies on children and infants lack control groups.[9]

Among patients with HIV, myocarditis is the most common cardiac pathological finding at autopsy, with a prevalence of 50% or more.[1]