Mitral valve prolapse (MVP) is a valvular heart disease characterized by the displacement of an abnormally thickened mitral valve leaflet into the left atrium during systole.[1] There are various types of MVP, broadly classified as classic and nonclassic. In its nonclassic form, MVP carries a low risk of complications. In severe cases of classic MVP, complications include mitral regurgitation, infective endocarditis, congestive heart failure, and—in rare circumstances—cardiac arrest, usually resulting in sudden death.

The condition was first described by John Brereton Barlow in 1966. As such, it mayalso be referred to as Barlow's Syndrome.[2] and was subsequently termed mitral valve prolapse by J. Michael Criley.[3]

The mitral valve, so named because of its resemblance to a bishop's mitre, is the heart valve that prevents the backflow of blood from the left ventricle into the left atrium of the heart. It is composed of two leaflets, one anterior and one posterior, that close when the left ventricle contracts.

Each leaflet is composed of three layers of tissue: the atrialis, fibrosa, and spongiosa. Patients with classic mitral valve prolapse have excess connective tissue that thickens the spongiosa and separates collagen bundles in the fibrosa. This is due to an excess of dermatan sulfate, a glycosaminoglycan. This weakens the leaflets and adjacent tissue, resulting in increased leaflet area and elongation of the chordae tendineae. Elongation of the chordae tendineae often causes rupture, commonly to the chordae attached to the posterior leaflet. Advanced lesions—also commonly involving the posterior leaflet—lead to leaflet folding, inversion, and displacement toward the left atrium.[4]

Diagnosis of mitral valve prolapse is based on modern echocardiographic techniques which can pinpoint abnormal leaflet thickening and other related pathology.

Prolapsed mitral valves are classified into several subtypes, based on leaflet thickness, concavity, and type of connection to the mitral annulus. Subtypes can be described as classic, nonclassic, symmetric, asymmetric, flail, or non-flail.[4]

All measurements below refer to adult patients; applying them to children may be misleading.

Classical prolapse may be subdivided into symmetric and asymmetric, referring to the point at which leaflet tips join the mitral annulus. In symmetric coaptation, leaflet tips meet at a common point on the annulus. Asymmetric coaptation is marked by one leaflet displaced toward the atrium with respect to the other. Patients with asymmetric prolapse are susceptible to severe deterioration of the mitral valve, with the possible rupture of the chordae tendineae and the development of a flail leaflet.[4]

Asymmetric prolapse is further subdivided into flail and non-flail. Flail prolapse occurs when a leaflet tip turns outward, becoming concave toward the left atrium, causing the deterioration of the mitral valve. The severity of flail leaflet varies, ranging from tip eversion to chordal rupture. Dissociation of leaflet and chordae tendineae provides for unrestricted motion of the leaflet (hence "flail leaflet"). Thus patients with flail leaflets have a higher prevalence of mitral regurgitation than those with the non-flail subtype.[4]

Echocardiography is the most useful method of diagnosing a prolapsed mitral valve. Two- and three-dimensional echocardiography are particularly valuable as they allow visualization of the mitral leaflets relative to the mitral annulus. This allows measurement of the leaflet thickness and their displacement relative to the annulus. Thickening of the mitral leaflets >5 mm and leaflet displacement >2 mm indicates classic mitral valve prolapse.[4]

Recent elucidation of mitral valve anatomy and the development of three-dimensional echocardiography have resulted in improved diagnostic criteria, and the true prevalence of MVP based on these criteria is estimated at 2-3%.[1] As part of the Framingham Heart Study, for example, the prevalence of mitral valve prolapse in Framingham, MA was estimated at 2.4%. There was a near-even split between classic and nonclassic MVP, with no significant age or sex discrimination.[7] MVP is observed in 7% of autopsies in the United States.[8]

MVP may occur with greater frequency in individuals with Ehlers-Danlos Syndrome, Marfan syndrome [9] or polycystic kidney disease.[10] Other risk factors include Graves' disease.[11] and chest wall deformities such as Pectus Excavatum [12]

A correlation has been reported between bipolar disorder and mitral valve prolapse.[13]

For unknown reasons, MVP patients tend to have a low body mass index (BMI) and are typically leaner than individuals without MVP.[4][7]

Upon auscultation of an individual with mitral valve prolapse, a mid-systolic click, followed by a late systolic murmur heard best at the apex is common.

Both valsalva maneuver and standing decrease venous return to the heart thereby decreasing left ventricular diastolic filling (preload) and causing more laxity on the chordae tendineae. This allows the mitral valve to prolapse earlier in systole, leading to an earlier systolic click (i.e. closer to S1), and a longer murmur. Hand grip maneuver increases total peripheral resistance (afterload) and therefore increases back pressure on the mitral valve resulting in a more intense murmur without changing the timing of the systolic click.

Historically, the term mitral valve prolapse syndrome has been applied to MVP associated with palpitations, atypical chest pain, dyspnea on exertion, low body mass index, and electrocardiogram abnormalities in the setting of anxiety, syncope, low blood pressure, and other signs suggestive of autonomic nervous system dysfunction.[1] Modern studies, however, have failed to demonstrate that these features occur with greater frequency in individuals with MVP.[1] 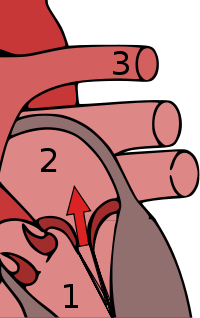 Mitral valve prolapse can result in mitral regurgitation, shown here, in which blood abnormally flows from the left ventricle into the left atrium.

Mitral valve prolapse is frequently associated with mild mitral regurgitation,[16] where blood aberrantly flows from the left ventricle into the left atrium during systole. In the United States, MVP is the most common cause of severe, non-ischemic mitral regurgitation.[1] This is occasionally due to rupture of the chordae tendineae that support the mitral valve. [14]

The MVP complications mitral regurgitation and congestive heart failure may, in turn, cause arrhythmias and atrial fibrillation that may progress and lead to sudden death. However, there is no evidence that a prolapsed valve itself contributes to such arrythmias.[17]

Generally, MVP is a benign disorder. However, MVP patients with a murmur, not just an isolated click, have a general mortality rate that is increased by 15-20%.[8] The major predictors of mortality are the severity of mitral regurgitation and the ejection fraction.[18]

Most patients benefit from a nutritious diet, regular exercise, and a supportive environment.[19] Those with mitral valve prolapse and symptoms of dysautonomia (palpitations, chest pain) may often benefit from beta-blockers (e.g., propranolol). Patients with prior stroke and/or atrial fibrillation may require blood thinners, such as aspirin or warfarin. However, although beta blockers are commonly prescribed, they may be of limited benefit.[20] Unless otherwise contraindicated, many people with MVPS benefit from non-drug interventions, such as increased fluid and sodium intake, avoiding adrenalin-like substances found in many over-the-counter medications, avoiding caffeine, and getting regular cardiovascular exercise.[21]

Mitral valve prolapse associated with severe mitral regurgitation can be treated with repair or surgical replacement of the mitral valve. Repair of the mitral valve is always preferable to replacement and should be performed by surgeons that are skilled in the procedure. Current ACC/AHA guidelines suggest that early repair of mitral valve, performed in centers of surgical excellence, should be considered even in patients without symptoms of heart failure. Symptomatic patients, those with evidence of diminished left ventricular function or left ventricular dilatation need urgent attention.

Treatment with magnesium supplements may help reduce symptoms of MVP.[22]

Individuals with MVP are at higher risk of bacterial infection of the heart, called infective endocarditis. This risk is approximately three- to eightfold the risk of infective endocarditis in the general population.[1] Until 2007, the American Heart Association recommended prescribing antibiotics before invasive procedures, including those in dental surgery. Thereafter, they concluded that "prophylaxis for dental procedures should be recommended only for patients with underlying cardiac conditions associated with the highest risk of adverse outcome from infective endocarditis." [23]

The term mitral valve prolapse was coined by J. Michael Criley in 1966 and gained acceptance over the other descriptor of "billowing" of the mitral valve, as described by John Brereton Barlow.[24]