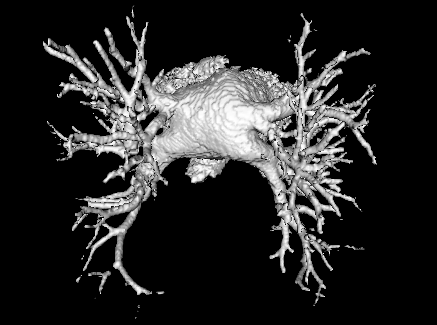 Caption2 = Computer rendering of a human left atrium.
Precursor =
System =
Artery =
Vein =
Nerve =
Lymph =
MeshName =
MeshNumber =
DorlandsPre = a_71
DorlandsSuf = 12167887
The left atrium is one of the four chambers in the . It receives ated from the , and pumps it into the , via the bicuspid valve.

Blood is pumped through the left atrioventricular orifice, which contains the bicuspid or . A normal left atrium may be up to 5.5cm in maximum diameter; any larger than this is a sign of . This may occur in cases of .

The left atrium of a human faces more or less posteriorly. It is named 'left' based on the chamber's embryological and (putative) evolutionary origin. The term 'base' of the heart sometimes refers to the left atrium, though 'base' is an ambiguous term.

Attached to the left atrium is the (auricle). This auricle is a common site for formation of thrombi, which may embolise causing stroke or ischemic gut. makes this more likely.

There is a foramen ovale (oval hole) between the right and left atrium in the fetus. After birth, this should close over and become the fossa ovale. If it does not, this is an (hole in the heart). In the fetus, the right atrium pumps blood into the left atrium, bypassing the pulmonary circulation (which is useless in a fetus). In an adult, a septal defect would result in flow in the reverse direction - from the left atrium to the right - which will reduce cardiac output, potentially cause and in severe or untreated cases, death.

The left atrium is supplied mainly by the left circumflex coronary artery, though the branches are too small to be identified in a cadaveric human heart and are not named.

The is partly responsible for venous drainage; it derives from the embryonic left .

Many other animals, including mammals, also have four-chambered hearts, and have a left atrium. The function in these animals is similar. Some animals (amphibians, reptiles) have a three-chambered heart, in which the blood from each atrium is mixed in the single ventricle before being pumped to the aorta. In these animals, the left atrium still serves the purpose of collecting blood from pulmonary veins.