It follows the left part of the coronary sulcus, running first to the left and then to the right, reaching nearly as far as the posterior longitudinal sulcus.

The LCX supplies the posterolateral left ventricle and the anterolateral papillary muscle.

It also supplies the sinoatrial nodal artery in 38% of people. 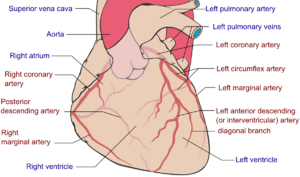 Coronary arteries (labeled in red text) and other major landmarks (in blue text). Left circumflex artery is labeled at right.