Caption = Schematic of the proximal aorta, frontal view. The brachiocephalic artery (labeled "innominate") is the third branch of the aorta and the first branch from the arch of the aorta. The in the lower left is not shown. 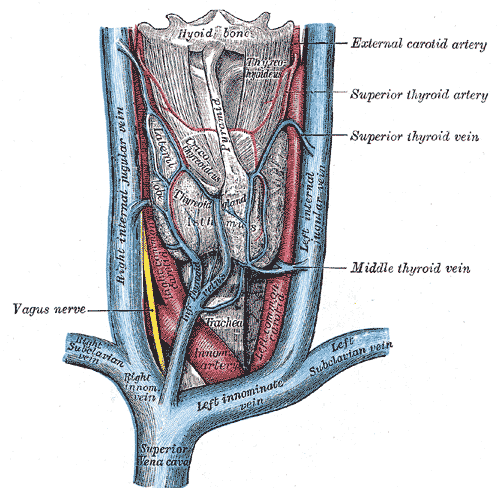 Vein =
Supplies =
MeshName = Brachiocephalic+Veins
MeshNumber = A07.231.908.130
DorlandsPre = t_20
DorlandsSuf = 12825973
The brachiocephalic artery (or brachiocephalic trunk or artery) is an of the that supplies blood to the right and the and .

It is the first branch of the aortic arch, and soon after it emerges, the brachiocephalic artery divides into the right and the right .

There is no brachiocephalic artery for the left side of the body. The left common carotid, and the left subclavian artery, come directly off the aortic arch. However, there are two s.

Anteriorly, it is separated from the by the and , the remains of the thymus, the left innominate and right inferior thyroid veins which cross its root, and sometimes the superior cardiac branches of the right vagus. Posterior to it is the trachea, which it crosses obliquely.

The innominate artery usually gives off no branches, but occasionally a small branch, the thyreoidea ima, arises from it. Other times, it gives off a thymic or bronchial branch.

It varies greatly in size, and appears to compensate for deficiency or absence of one of the other thyroid vessels. It occasionally arises from the , the , the or the .