Caption = Plan of the branches. 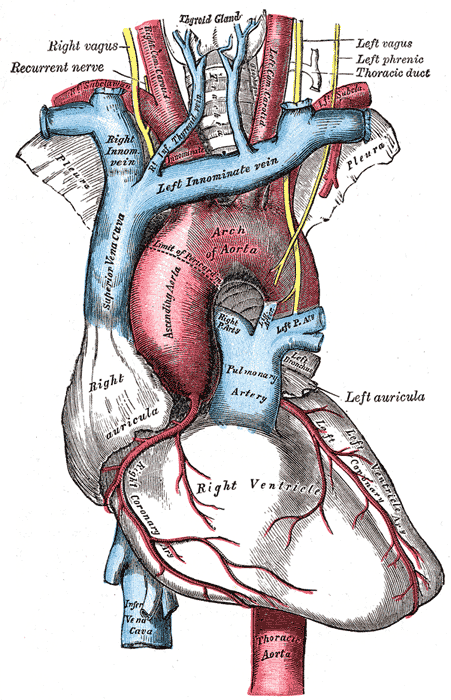 The arch of the aorta (Transverse Aorta) begins at the level of the upper border of the second sternocostal articulation of the right side, and runs at first upward, backward, and to the left in front of the trachea; it is then directed backward on the left side of the trachea and finally passes downward on the left side of the body of the fourth , at the lower border of which it becomes continuous with the .

The Arch of Aorta (Aortic Arch) is covered anteriorly by the and anterior margins of the lungs, and by the remains of the .

As the vessel runs backward its left side is in contact with the left lung and pleura.

As the left crosses the arch, it gives off its recurrent branch, which hooks around below the vessel and then passes upward on its right side.

The highest left runs obliquely upward and forward on the left side of the arch, between the phrenic and vagus nerves.

On the right are the deep part of the , the left recurrent nerve, the , and the ; the lies behind and to the right of the vessel.

Above are the innominate, left common carotid, and left subclavian arteries, which arise from the convexity of the arch and are crossed close to their origins by the left .

Below are the bifurcation of the pulmonary artery, the left bronchus, the , the superficial part of the cardiac plexus, and the left recurrent nerve.

The connects the commencement of the left pulmonary artery to the aortic arch.