Mitral stenosis is a valvular heart disease characterized by the narrowing of the orifice of the mitral valve of the heart.[1]

Symptoms of mitral stenosis include:

Symptoms increase with exercise and pregnancy[2]

Other causes include Bacterial endocarditis where the vegetations may favor increase risk of stenosis. It is the most common valvular heart disease in pregnancy[4] 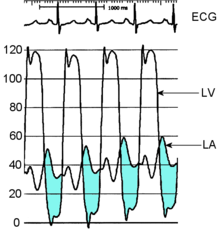 When the mitral valve area goes less than 1 cm2, there will be an increase in the left atrial pressures (required to push blood through the stenotic valve). Since the normal left ventricular diastolic pressures is about 5 mmHg, a pressure gradient across the mitral valve of 20 mmHg due to severe mitral stenosis will cause a left atrial pressure of about 25 mmHg. This left atrial pressure is transmitted to the pulmonary vasculature and causes pulmonary hypertension. Pulmonary capillary pressures in this level cause an imbalance between the hydrostatic pressure and the oncotic pressure, leading to extravasation of fluid from the vascular tree and pooling of fluid in the lungs (congestive heart failure causing pulmonary edema).[citation needed]

In individuals with severe mitral stenosis, the left ventricular filling is dependent on the atrial kick. The loss of the atrial kick due to atrial fibrillation can cause a precipitous decrease in cardiac output and sudden congestive heart failure.[citation needed]

Patients with mitral stenosis prompts a series of hemodynamic changes that frequently cause deterioration of the patient's clinical status. A reduction in cardiac output, associated with acceleration of heart rate and shortening of the diastolic time, frequently leads to congestive heart failure. In addition, when AF sets in, systemic embolization becomes a real danger.[5]

Mitral stenosis typically progresses slowly (over decades) from the initial signs of mitral stenosis to NYHA functional class II symptoms to the development of atrial fibrillation to the development of NYHA functional class III or IV symptoms. Once an individual develops NYHA class III or IV symptoms, the progression of the disease accelerates and the patient's condition deteriorates.[citation needed] 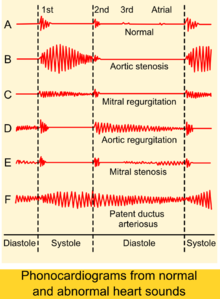 Upon auscultation of an individual with mitral stenosis, the first heart sound is unusually loud and may be palpable (tapping apex beat) because of increased force in closing the mitral valve. The first heart sound is made by the mitral and tricuspid heart valves closing. These are normally synchronous, and the sounds are termed M1 and T1 respectively. M1 becomes louder in mitral stenosis. It may be the most prominent sign.[2]

If pulmonary hypertension secondary to mitral stenosis is severe, the P2 (pulmonic) component of the second heart sound (S2) will become loud.[citation needed]

A mid-diastolic rumbling murmur with presystolic accentuation will be heard after the opening snap.[2][6] The murmur is best heard at the apical region and is not radiated. Since it is low-pitched it is heard best with the bell of the stethoscope.[2] Its duration increases with worsening disease.[2] Rolling the patient towards left, as well as isometric exercise will accentuate the murmur. A thrill might be present when palpating at the apical region of the precordium.[citation needed]

Advanced disease may present with signs of right-sided heart failure such as parasternal heave, jugular venous distension, hepatomegaly, ascites and/or pulmonary hypertension, the latter often presenting with a loud P2.[2]

Almost all signs increase with exercise and pregnancy.[2]

Other peripheral signs include:

In most cases, the diagnosis of mitral stenosis is most easily made by echocardiography, which shows left atrial enlargement, thick and calcified mitral valve with narrow and "fish-mouth"-shaped orifice and signs of right ventricular failure in advanced disease.[2] It can also show decreased opening of the mitral valve leaflets, and increased blood flow velocity during diastole. The trans-mitral gradient as measured by Doppler echocardiography is the gold standard in the evaluation of the severity of mitral stenosis.[citation needed]

Electrocardiography may show P mitrale, that is, broad, notched P waves in several or many leads with a prominent late negative component to the P wave in lead V1, and may also be seen in mitral regurgitation, and, potentially, any cause of overload of the left atrium.[7] Thus, P-sinistrocardiale may be a more appropriate term.[7]

In individuals who were offered mitral valve surgery but refused, survival with medical therapy alone was 44 ± 6% at 5 years, and 32 ± 8% at 10 years after they were offered correction.[citation needed]

Treatment is not necessary in asymptomatic patients.[2]

The indication for invasive treatment with either a mitral valve replacement or valvuloplasty is NYHA functional class III or IV symptoms.[citation needed]

Another option is balloon dilatation.[8] To determine which patients would benefit from percutaneous balloon mitral valvuloplasty, a scoring system has been developed. Scoring is based on 4 echocardiographic criteria: leaflet mobility, leaflet thickening, subvalvar thickening, and calcification. Individuals with a score of ≥ 8 tended to have suboptimal results.[9] Superb results with valvotomy are seen in individuals with a crisp opening snap, score < 8, and no calcium in the commissures.

Mitral valvuloplasty is a minimally invasive therapeutic procedure to correct an uncomplicated mitral stenosis by dilating the valve using a balloon. Under local anaesthetic, a catheter with a special balloon is passed from the right femoral vein, up the inferior vena cava and into the right atrium. The interatrial septum is punctured and the catheter passed into the left atrium using a "trans-septal technique". The balloon is sub-divided into 3 segments and is dilated in 3 stages. 1st the distal portion (lying in the left ventricle) is inflated and pulled against the valve cusps. Second the proximal portion is dilated, in order to fix the centre segment at the valve orifice. Finally, the central section is inflated, this should take no longer than 30 seconds since full inflation obstructs the valve and causes congestion, leading to circulatory arrest and flash pulmonary edema.[citation needed]

With careful patient pre-selection, percutaneous balloon mitral valvuloplasty (PBMV) is associated with good success rates and a low rate of complications. By far the most serious adverse event is the occurrence of acute severe mitral regurgitation. Severe mitral regurgitation usually results from a tear in one of the valve leaflets or the subvalvular apparatus. It can lead to pulmonary oedema and hemodynamic compromise, necessitating urgent surgical mitral valve replacement.[citation needed]

Other serious complications with PBMV usually relate to the technique of trans-septal puncture (TSP). The ideal site for TSP is the region of the fossa ovalis in the inter-atrial septum. Occasionally, however, the sharp needle used for TSP may inadvertently traumatize other cardiac structures, leading to cardiac tamponade or serious blood loss.[citation needed]

Although the immediate results of PBMV are often quite gratifying, the procedure does not provide permanent relief from mitral stenosis. Regular follow-up is mandatory, to detect restenosis. Long-term follow up data from patients undergoing PBMV indicates that upto 70-75% individuals can be free of restenosis 10 years following the procedure. The number falls to about 40% 15 years post-PBMV.[10]